15 June 2022, Geneva, Switzerland – For the past twenty years, UNOSAT has been developing its expertise in using Geospatial Information Technologies to promote evidence-based decision-making for peace, security and resilience.  The relevant and objective information provided to UN agencies, programme and Member States helps inform recovery activities, investigations and overall peace processes.

Damage assessment, population movements, monitoring borders, accessibility status of remote areas,.. these are some of the ways advanced geospatial analysis can help monitor the evolution of conflict situations and other complex emergencies. For example, using satellite imagery is very effective for damage to infrastructure estimations: one defined area can be compared at two points in time through available images, overcoming the challenges of access due to security problems or remote locations. Therefore, the information derived from satellite imagery allows for a more comprehensive understanding of the situation, and the identification and documentation of areas inaccessible to field missions. The information provided is valuable evidence for investigative mechanisms to supplement or complement their findings and witness accounts in support of justice and reconciliation proceedings. UNOSAT has long collaborated with the United Nations Development Programme (UNDP), Offices of Special Envoys (OSEs), the UN Operations and Crisis Centre (UNOCC) and various UN missions and country offices.

Support to the International Criminal Court 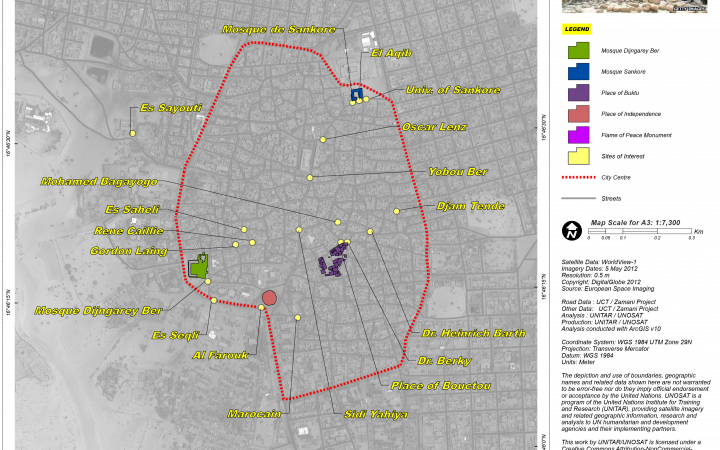 A compelling example is the satellite-derived information provided for the Al-Hassan case: on 31 January 2013, UNOSAT produced a map showing the location of cultural heritage sites in the city of Timbuktu, Mali, some of which were reported to be damaged by the Ansar Dine militia. In March 2018, Al-Hassan Ag Abdoul Aziz Ag Mohamed Ag Mahmoud, an alleged member of Ansar Dine and de facto chief of the Islamic police, was arrested for crimes against humanity and war crimes, including the destruction of religious objects, committed in Timbuktu between 2012 and 2013. The map, with additional detailed information given to the ICC provided key elements on the status of various cultural heritage sites in Mali and corroborated the date damages had occurred.

The strong and continuing collaboration with the ICC is a confirmation of the added value of how UNOSAT’s expertise in satellite imagery analysis can help protect and apply international humanitarian law. 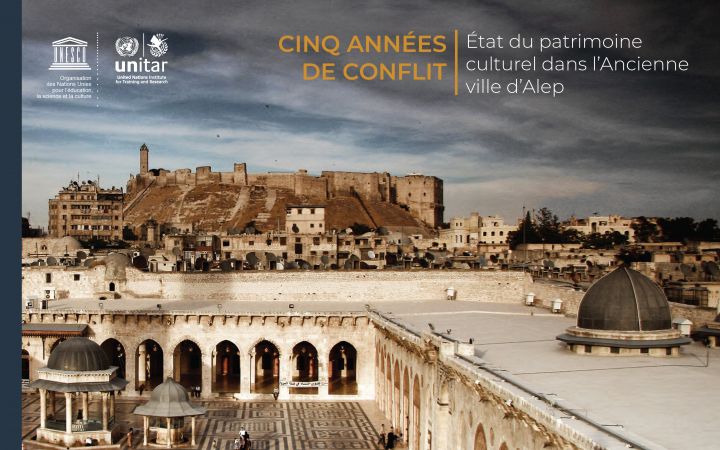 Leveraging the power of satellite imagery analysis for peace and reconciliation has proven important in the protection of cultural heritage as well. Being an essential component of a community’s identity and memory, cultural heritage sites are often targeted during armed conflicts and their reconstruction is integral to planning the urban recovery. Using remote sensing allows for precise and extensive documentation of damages to these sites, and can be combined with archeological expertise for a comprehensive assessment of both the extent of physical damages and historical loss. Therefore, UNOSAT started using Earth Observation for the protection of heritage sites in August 2008. The mapping support team presented a satellite imagery-based damage assessment for religious sites and cultural monuments in conflict areas. The analysis of damages to buildings in a conflict context had to take into consideration the special nature of the buildings. This first experience using satellite imagery-derived damage assessment for cultural sites became the foundation for future analysis.

Since then, extensive work was done, including in the middle east, and mainly through the strong partnership developed with UNESCO. UNOSAT has partnered with UNESCO to provide timely and objective information on destructive activities due to conflicts in the region, affecting a number of World Heritage sites. The complementary roles of UNESCO and UNOSAT were key to ensuring an objective UN assessment of the status of cultural heritage in the region, founded on scientific methods, with the preservation of World Heritage as the sole objective. Extensive work was done over the Middle East, including Iraq, Yemen and Syria. Various publications have been released, and the partnership continues to grow with UNOSAT’s expertise, including updates on endangered sites, analyses of new areas of concern, and assessments of the state of natural heritage sites following disasters.