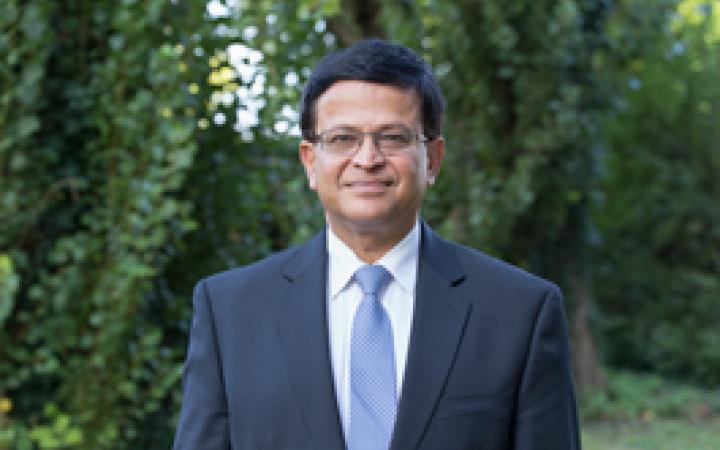 I am an International Gender Champion and support the IGC Panel Parity Pledge.

Before assuming the post of the UNITAR Executive Director, Nikhil Seth was the Director of the Division for Sustainable Development, Department of Economic and Social Affairs (DESA) at the United Nations Secretariat in New York. In this role he served as head of the Rio+20 secretariat and of the secretariat for the Third International Conference on Small Island Developing States, spearheading the preparations for these conferences in Rio, Brazil, and Apia, Samoa. He was also closely engaged in coordinating and advancing their follow-up.

Mr. Seth’s Division was also responsible for supporting the intergovernmental negotiations for the post-2015 development agenda, which was adopted at the United Nations Sustainable Development Summit 2015 in September 2015.

During his career with the United Nations since 1993, Mr. Seth has served as Special Assistant and Chief of Office to the Under-Secretary-General for Economic and Social Affairs (Sept 1993 – Jun 2001), Chief of the Policy Coordination Branch in the Division for ECOSOC Support and Coordination (Jun 2001 – Jan 2003), as Secretary of the Economic and Social Council (ECOSOC) and the Second Committee of the General Assembly (Feb 2003 – Aug 2006), and as Director of the DESA Office for ECOSOC Support and Coordination (Aug 2006 – Aug 2011), where he guided the ECOSOC's work in implementing several new key mandates, including its Annual Ministerial Review and Development Cooperation Forum.

Before joining the UN Secretariat, he was a delegate to the UN in the Permanent Mission of India to the United Nations (Sep 1990 – Sep 1993) and involved with various UN conferences and summits including the Rio Summit on Environment and Development and the climate change related process.   After joining the UN, he has been involved in the organization of the Copenhagen Summit on Social Development, the Monterrey Conference on Financing for Development, the Mauritius Conference on Small Island Developing States, the Millennium Summit, World Summit on Sustainable Development and the UN World Summit, beside the Rio+20 Conference.

Before joining the Indian diplomatic service, he worked as a Lecturer in Economics in St. Stephen College, Delhi University for 2 years (Aug 1977 – Sep 1979).

As part of the World Humanitarian Forum interview series (WHF Talks), Mr. Nikhil Seth - UNITAR Executive Director - discussed the role of online training, education and capacity building along with the challenges placed on education globally caused by the COVID-19 pandemic. Mr. Seth also analyzed how online learning creates more flexible opportunities for students to advance their personal development, while keeping in mind the necessity to consider the digital divide.

“Putting science, technology and Innovation at the service of the poor and for safeguarding our planet” At the occasion of 50th Anniversary Conference of the Rencontres de Moriond: Fundamental Science and Society, 7 – 8 July 2016, Quy Nhon, Vietnam (PDF, 68KB)

The extensive experience of the former Executive Directors and their in-depth knowledge of the challenges facing the newly independent countries played a key role in the successful work of the Institute. In addition to their experience in the diplomatic service and their political activism – in particular, a forceful anticolonial stance – they had all distinguished themselves through their theoretical contributions, academic research and teaching. Their achievements also included contributions to literature or journalism.