Weaving Stories of Reconciliation: The power of storytelling and art as tools for reconciliation in Colombia and the Latin American continent

Learn more about the event in Spanish - Click Here!

Learning to stand in somebody else's shoes, to see through their eyes, that's how peace begins. And it's up to you to make that happen. - Barack Obama, The Former 44th President of the United States of America

Background: the implementation of a project that has supported the reconciliation process in Colombia 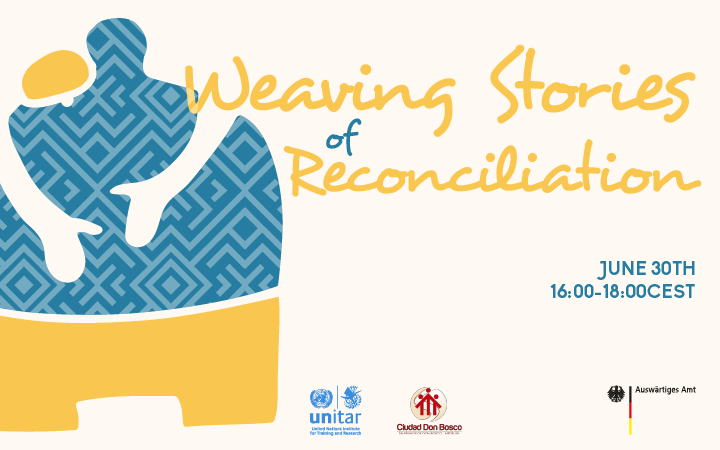 The Colombian society has been undergoing more than 50 years of armed conflict. Generations of Colombians carry the memories of their personal experiences of violence, exclusion, and protracted conflict. Their way of looking at the world has been shaped by these experiences and the differences in perspectives keep standing in the way to sustainable reconciliation.

Weaving Stories of Reconciliation is a panel discussion that builds on the outcomes of the project Youth-Led Peace and Reconciliation in Colombia: a Transformational Approach, which has been designed by The United Nations Institute for Training and Research (UNITAR) with the generous funding of the German Federal Foreign Office. It was implemented in Colombia, in partnership with the local NGO Ciudad Don Bosco (CDB) between 2019 and 2020, with the support of a network of 37 local organizations and institutions.

The project was designed to contribute to the peace and reconciliation process in Colombia by strengthening the resilience and conflict prevention capacity of young people, their families, and the communities to which they belong in vulnerable areas of different territories of the country. With the vision to support the leadership role of young people in strengthening community-based reintegration processes, conflict resolution mechanisms as well as community resilience and reconciliation, the project was structured in three components. Through transformative learning processes, project participants were enabled to: (1) overcome past experiences lived during the conflict; (2) recognize their potential as agents of positive and peaceful change in their immediate surroundings; and (3) contribute to reconciliation efforts.

The third project component, entitled: “Perspectives of Peace/ Perspectivas de Paz” builds the basis for this event. It provided participants, from different Colombian territories, with a space to reflect on how narratives of the past hold the power to define the future -- and, through UNITAR’s tailored methodology, allowed the creation of collective historical memory by forming new, constructive and peaceful narratives focused on reconciliation, resilience and conflict resolution.

The starting point of this transformative process towards reconciliation was the trust-building workshops, as well as the activities that allowed reflection on the individual lived experience in connection with the collective history. This was followed by empathy-based interviews with community members conducted by participants of the project applying a do-no-harm approach. The common factor in these interviews was the recognition of shared humanity, no matter a possible difference of perspective. At a second stage, the participants resorted to their creative abilities to artistically represent the story of their counterparts, and in some cases, their own story.

Many of these art pieces were documented and became the central axis of an art exhibition that was presented in seven Colombian territories and will be presented in Geneva (Switzerland) and Bonn (Germany) in the fall of this year. In addition, in order to preserve and exhibit the totality of these narrative and artistic pieces, and to respect the voice of all the communities that joined “Perspectivas de Paz”, a virtual art exhibition has been created and is hosted on the project's main website.

Perspectives of Peace opened a space for artistic expression, dialogue and encounter of the Colombian society, around the voices of many communities that have a great capacity for resilience, despite having been affected by the armed conflict. This pedagogical process opened paths of personal healing and reconciliation among the members of the communities, who, in many cases, had simply decided to remain silent and ignore their experiences. After having lived Perspectives for Peace, these communities found common ground, shared visions from different life stories, or even different perspectives of the same story.

We believe that many valuable lessons learned from this process deserve to be shared with a wider audience. The panel discussion wants to provide a space to explore approaches that share the same goal and strategy – using storytelling and art as vehicles for reconciliation in Colombia and other Latin American contexts.

Thanks to the lessons learned, UNITAR is honoured to lead a virtual panel discussion open to the general public, with the participation of renowned champions in the defense of human rights and peace, who play a central role in promoting a conversation around storytelling and art as vehicles for reconciliation in society.

With this virtual panel event, UNITAR is aiming to:

120-minute panel event with 4 panellists, a keynote speaker, a moderator and an artist who will close the event.

The event will be conducted in Spanish, with simultaneous translation into English.

Mr Nikhil Seth, Under-Secretary-General of the United Nations and Executive Director of UNITAR. He has over 35 years of service as an international and national civil servant, and extensive experience in leading, supporting and managing intergovernmental processes, including UN summits and conferences in the economic, social and environmental fields. He has held various positions at the UN since 1993, and since 1980 he served successfully in the Indian diplomatic service.

Mr Peter Ptassek, Ambassador of Germany to Colombia. He served as Delegate for Strategic Affairs of the European Union, and as Deputy Director-General of the Europe Department at the Federal Foreign Office in Berlin. Since joining the German senior diplomatic service in 1993, Mr. Ptassek has been an official representing his country's government during missions in Afghanistan, Paris and Moscow.

Moderator and master of ceremonies

Mónica Beltrán Espitia, Minister Plenipotentiary of Diplomatic Career. She has more than 24 years of experience in diplomacy and international relations, a field in which, from the Colombian Ministry of Foreign Affairs, coordinated the Sports and Cultural Diplomacy Strategy with young people from vulnerable communities, in order to prevent recruitment into illegal economic networks and illegal armed groups.

Rigoberta Menchú-Tum, Guatemalan feminist of K'iche' origin and human rights activist. Mrs. Menchú-Tum has dedicated her life to raising awareness of the rights of Guatemala's indigenous peoples during and after the Guatemalan civil war (1960-1996), and to promoting indigenous rights internationally. She received the Nobel Peace Prize in 1992 and the Prince of Asturias Award in 1998.

Juanes, Colombian musician and singer-songwriter. Juanes speaks openly, both in his music and in the media, about violence and inequality in Colombia. Juanes created the Mi Sangre Foundation to help landmine victims. In 2005, he was named by Time as one of the 100 most influential people in the world. On November 15, 2005, he was honoured at Sir Paul McCartney's annual Adopt-A-Minefield benefit gala for his work as a goodwill ambassador for "Unidos por Colombia," a non-profit organization that raises awareness of the impact of landmines in Colombia.

Pastora Mira, A social leader who, despite being affected - along with her family - by the armed conflict, has dedicated her life to serving communities, working for reconciliation among community members and promoting educational projects that help ex-combatants reintegrate into civil society. She is one of the victims' representatives who attended the presentation of the Nobel Peace Prize to former President Juan Manuel Santos in 2016 and shared her life testimony before Pope Francis during his visit to Colombia in 2017.

Leonardo Párraga, 22-year-old Colombian activist passionate about community empowerment and social justice. He is the founder and director of the BogotArt Foundation, an organization created with the aim of promoting a more democratic artistic and cultural scene in the city of Bogota, transforming marginalized neighbourhoods into cultural centers and co-creating, hand in hand with other organizations, new spaces for participation.

Luz Marina Monzón, current director of the Unit for the Search for Disappeared Persons (UBPD). Human rights defender representing Colombian victims before national courts and the Inter-American human rights system. Together with the National Center of Historical Memory, she has documented the struggle of victims in the search for justice for human rights violations in cases of forced disappearance, arbitrary executions, torture and sexual violence.

Guest artist for the concert

Marta Gómez, a two-time Latin Grammy Award-winning Colombian singer-songwriter whose work combines the main Latin American folk rhythms with the sound possibilities of jazz, resulting in songs with a deep poetic sense and a high social content that has positioned her as a reference in the current music scene. The social component has always been present in her work; she is convinced that her throat and her guitar are powerful weapons to give voice to those who cannot tell their story - which has been blurred by violence and inequality - but who, despite everything, find reasons to continue fighting from joy and hope. That is why Marta's music is like a hug in the midst of the pain that afflicts the world. She has been awarded the Latin Grammy in 2014.