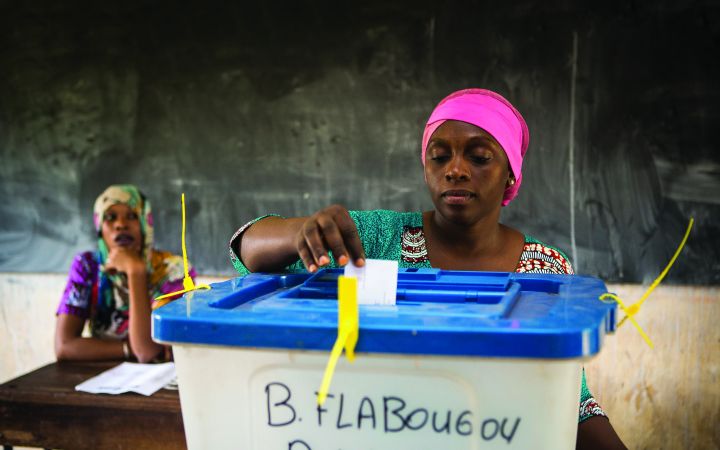 Democracy has often been considered as one of the durable systems for building sustainable peaceful and inclusive societies, especially societies experiencing deep socio-political divisions. In most countries undergoing political transitions, these transitions may be triggered by various factors in a bid to change the prevailing political and constitutional order.

Lately, various political transitions have occurred following popular revolutions including the Arab Spring in Tunisia, Libya, and Egypt or military coups that happened in Haiti, Mali, and Myanmar. The end of civil wars in countries like Sudan, Democratic Republic of Congo, Central African Republic, Iraq, Afghanistan, and Colombia have also ushered in political transitions. More often than not, to correct previous socio-political and economic imbalances, many of these countries have opted to embrace a democratic track to establishing a new political and constitutional order. In attaining a new order, the role of elections is often considered central to establishing legitimate political institutions.

It is paramount that policymakers, electoral administrators, and other international and local stakeholders involved in conducting elections should not only be aware of the context, dynamics, and demands of organizing elections in unstable environments. They also need to equip themselves with practical skills and tools to effectively engage within such a setting to deliver peaceful elections which lay a solid foundation for the democratization process in complex political environments.

Through the online Master in Electoral Policy and Administration jointly delivered by UNITAR and the Scuola Superiore Sant’Anna, and in cooperation with the European Center for Electoral Support, the Innov-Elections project aims to promote the leadership skills and conflict management capabilities of electoral stakeholders, with a focus on reinforcing women and youth's participation in election management.

The Master in Electoral Policy and Administration is based of four As – Availability, Accessibility, Acceptability, and Adaptability, our programme supports the fundamental goal of reaching the furthest first and leaving no one behind.

This initiative enhances electoral stakeholders’ leadership, conflict, and quality management capacities and contributes to the digitalization of electoral processes. Since its inception, the impact of the Innov-Elections project has extended to a total of 35 beneficiary countries and more than 1,088 representatives of Electoral Management Bodies in Africa, delivering activities in English, French, Portuguese, and Arabic. The project has provided a dynamic and interactive platform where election administrators, practitioners, and stakeholders can deepen their knowledge and develop their skills surrounding several topics within the theme of the electoral process.

Partnerships are setting the basis for practice-based approaches to education that offers students and practitioners the competences needed in the face of crises. In June 2021, UNITAR and UNDP organized a workshop under the framework of supporting the electoral processes in Libya. The workshop aimed at examining the capacity of Libyan electoral security stakeholders as a step toward developing a tailored comprehensive capacity-building programme. This initiative will further enrich opportunities for the Libyan cohort when they participate in the online Master's Program delivered in partnership with the Scuola Superiore Sant'Anna, thereby equipping students with the knowledge and skills to deliver peaceful, democratic and credible elections.