Towards a world free of nuclear weapons: Mongolian alum gears up for negotiations

December 2021 - The pandemic years saw important milestones for nuclear disarmament. The year 2020 marked 75 years since the first and only use of nuclear weapons in the world and the 50th anniversary of the Treaty on the Non-Proliferation of Nuclear Weapons (NPT). And in 2021, the Treaty on the Prohibition of Nuclear Weapons entered into force, cementing a categorial ban on nuclear weapons.

Yet, large-scale commemorations were curtailed due to the pandemic. What’s more, the annual Review Conference of the Parties to the NPT, where diplomats gather to review the operation of the treaty, has been postponed several times from its original 2020 date. It is now expected to be held in the second half of 2022.

It was to prepare for negotiations on nuclear disarmament like the NPT Review that Amaraa Erdenebaatar, First Secretary of the Permanent Mission of Mongolia to the United Nations Office in Geneva, took part in the 2021 UNITAR Hiroshima Training Programme on Nuclear Disarmament and Non-Proliferation. 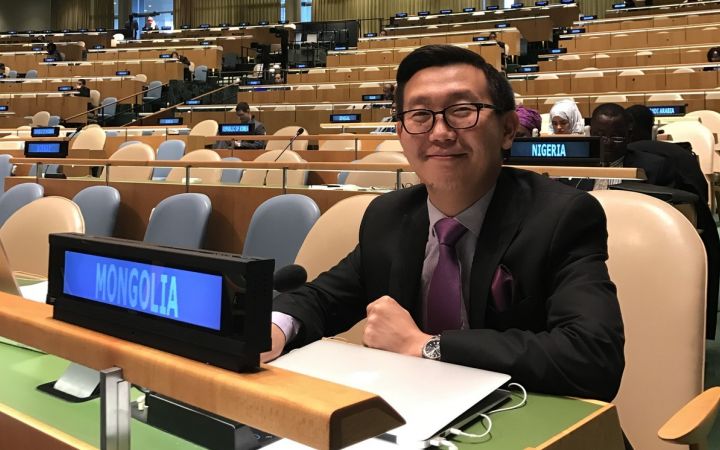 Amaraa Erdenebaatar, First Secretary of the Permanent Mission of Mongolia to the United Nations Office in Geneva and alumnus of 2021 UNITAR Hiroshima Training Programme on Nuclear Disarmament and Non-Proliferation.

Amaraa represents a country with a unique position: Mongolia is the only country in the world with a self-declared nuclear-weapon-free status that has been recognized internationally (United Nations General Assembly resolution 55/33S).

While most countries can form nuclear-weapon-free zones with their neighbours, that is not an option for Mongolia, a landlocked country sandwiched between two nuclear giants, China and Russia. It thus declared itself a single-state nuclear-weapon-free area in 1992.

According to Mongolian law, no one may develop, test, have or transport nuclear weapons, parts of such weapons, or nuclear materials or waste through the country. The international community recognized Mongolia’s special status in 1998 (United Nations General Assembly resolution 53/77 D) and has since considered and adopted resolutions on the subject every two years. The five nuclear-weapon states also declared their political support, issuing joint statements in 2000 and 2012.

Mongolia is coordinating the fourth conference of nuclear-weapon-free zones and Mongolia, which promotes cooperation among such zones and Mongolia with other states to strengthen the nuclear disarmament and non-proliferation regime. The conference has been postponed along with the NPT Review.

As a diplomat in the Mongolian foreign service, Amaraa came into the security field partly by chance, when he accepted a post on multilateral cooperation. Since 2019, he has been stationed in Geneva, where he is responsible for disarmament and security issues, including the Conference on Disarmament and the Biological Weapons Convention – Meetings of the States Parties.

In 2021, Amaraa joined other officials from Asian ministries of foreign affairs and defence to take part in the UNITAR nuclear disarmament and non-proliferation training.

The online programme, run from Hiroshima, aimed to increase diplomats’ understanding of the nuclear-disarmament debate and equip them with the skills to communicate and negotiate effectively in international meetings on disarmament and non-proliferation.

Amaraa noted how the course had both theoretical and practical components. The participants learned the theory through on-demand courses and live webinars with leading experts such as

We had this real-world experience. They gave us the history, the disarmament and non-proliferation issues, who are the main players, what are their positions, and what’s the current stance. 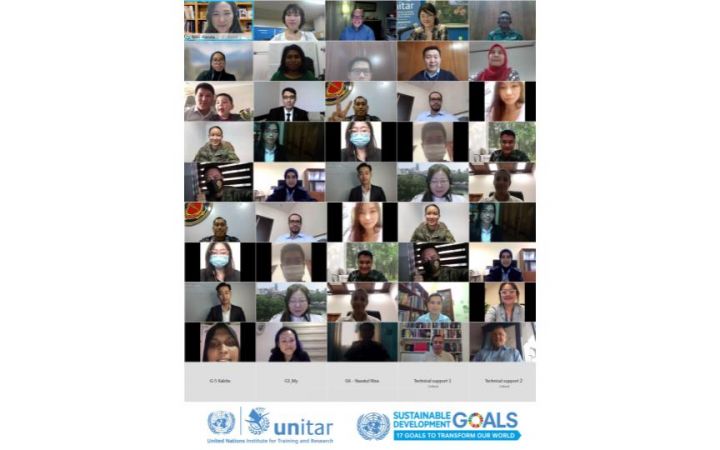 An online conference simulation during the training programme

The course culminated in an online conference simulation, where the learners could practice their new communication and negotiation skills. Divided into three positions on nuclear disarmament, participants negotiated a paragraph of an NPT Foreign Ministers Communiqué in the mock conference.

We had to work very hard to prepare our group position, but that paid off. Because that’s the thing that experts who are engaged in disarmament and non-proliferation do in their everyday work.

The groupwork gave Amaraa a chance to know his colleagues. Despite the limits of working online, his team developed good camaraderie through the live workshops and set up their own WhatsApp group to keep in touch. “I hope that one day we will meet in person in different forums,” he says. 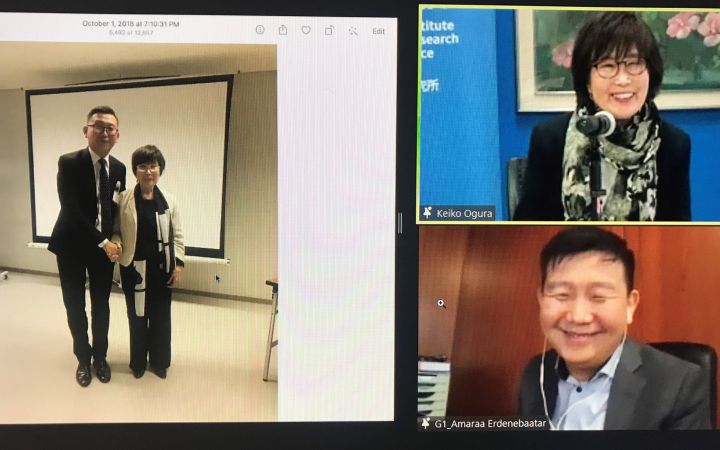 Meeting with Ms. Keiko Ogura, a hibakusha (survivor of the atomic bomb)

Another programme highlight was a meeting with Ms. Keiko Ogura, a hibakusha (survivor of the atomic bomb). For Amaraa, this was a reunion: he had met Ms. Ogura in 2018 when he visited Hiroshima and Nagasaki through the UN Disarmament Fellowship Programme.

Amaraa remarks how powerful it is to listen to hibakusha and their real-life experiences. “Many of our fellows changed their perception of the nuclear weapon,” he says.

Ms. Ogura told the UNITAR learners that they were her “vitamins” because they were working on the front lines to bring about a world free of nuclear weapons. But Amaraa told her otherwise.

Diplomats – most of the time we engage with papers and words. But listening to real stories of hibakusha – that makes us work hard. So I told her that she and hibakusha were vitamins for us.

Hopes for the future

Unlike conventional security, a world with nuclear weapons means it’s not enough to secure your own home. “If you are secure but your neighbours are not, then you cannot live in a secured environment. Your life depends on the life of others,” says Amaraa.

Amaraa sees himself continuing in the field of security and disarmament and engaging in negotiations with colleagues towards a world free of nuclear weapons. Ultimately, he wants to make the world safer for his children.

I believe that everyone’s life is dedicated to his or her children. All I’ve been doing and will do is for a better future for them.

The 2022 UNITAR Hiroshima Training Programme on Nuclear Disarmament and Non-Proliferation will be launched in February.

The video below introduces voices from UNITAR Hiroshima Nuclear Disarmament and Non-Proliferation Training 2021. From 13 countries, 35 government officials on the frontline of nuclear disarmament negotiations joined the three-week online programme. They learned through a combination of on-demand e-learning and live webinars.