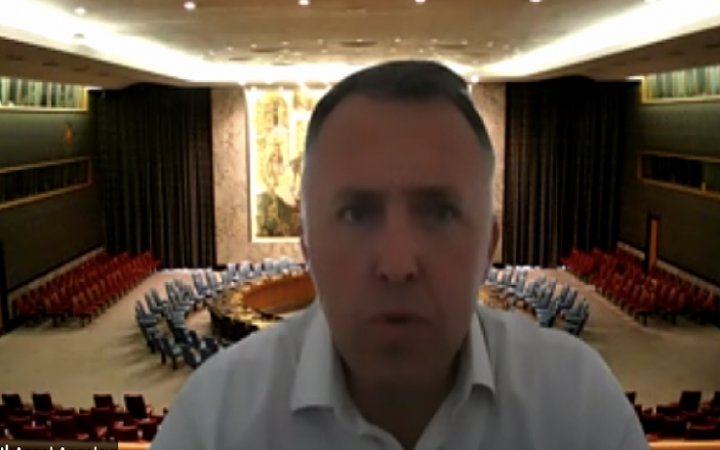 14 September 2020, New York, USA, Video Conferences - The United Nations Institute for Training and Research (UNITAR) New York Office (NYO) successfully launched its course “Strengthening Knowledge and Skills in Multilateral Diplomacy: Induction Course for Qatari Diplomats” on 14 September. The training will last through 18 September and is a comprehensive course designed to enhance the performance of the diplomatic staff from the Permanent Mission of Qatar to the United Nations. The Qatari delegation also attended the “Briefing on the Work of the 75th General Assembly and the Main Committees” facilitated by UNITAR NYO from 10-11 September. 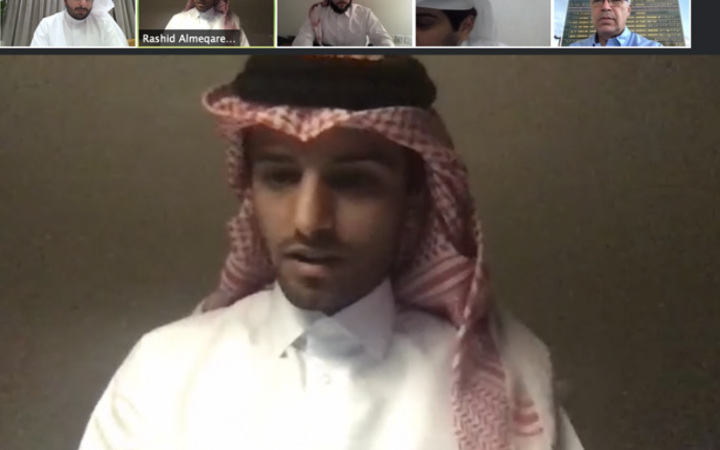 Mr. Pelayo Alvarez from UNITAR NYO opened the session by welcoming participants and introducing the session’s panelist, Dr. Angel Angelov, UNITAR panelist and Bulgaria’s Security Council Expert. Dr. Angelov greeted participants and introduced the session’s primary theme on United Nations structure and General Assembly rules and procedures. Dr. Angelov began by briefly outlining Qatar’s history with the UN, including its successful admission into the UN as a member state in 1971. This led into an explanation on how a state becomes a member state, as well as the differences between member states and observer states. 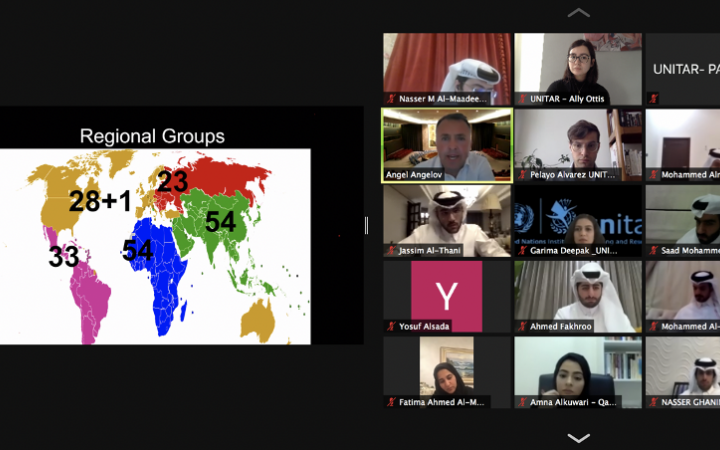 Dr. Angelov overviewed the structure of Permanent Missions to the UN, discussing the roles of the Permanent Representative, Deputy Permanent Representative, other diplomats and support staff. He also pointed toward the UN BlueBook in which delegates can view the composition of all Permanent Missions. Dr. Angelov then moved to discussing different groups of member states and explained these can be regional or political. In the context of regional groups, he spoke about the interesting case of Cyprus, which is an EU member state that sits within the Asia/Pacific group because of its regional location. Speaking on political groups, Dr. Angelov overviewed such groups as the League of Arab States, the G77+China, and the Non-Aligned Movement, as well as well-known conglomerations of states such as the EU and AU. 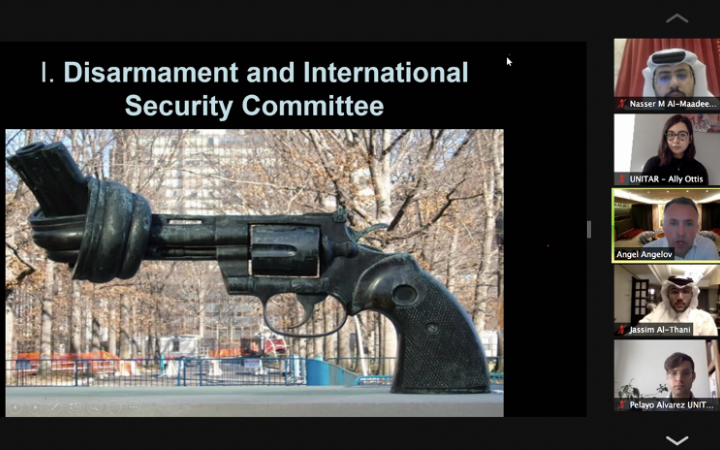 Dr. Angelov then discussed the functions of the Principal Organs of the United Nations, which consist of the General Assembly, Security Council, the Economic and Social Council (ECOSOC), the Secretariat, the International Court of Justice (ICJ), and the Trusteeship Council. All of these organs, with the exception of the ICJ, are based in New York at UN Headquarters. Dr. Angelov continued with a discussion on the functions of the six Main Committees. He also elaborated on the structure of the Security Council, the nature of its membership, the five permanent members and ten non-permanent members. Dr. Angelov concluded the day’s session by touching on the 2020 campaign for Security Council membership, in which Kenya, India, Mexico, Ireland, and Norway were elected to serve in the 2021-2022 term.

Mr. Alvarez thanked the Qatari diplomats for their attendance and enthusiastic participation on the first day of the week-long training. 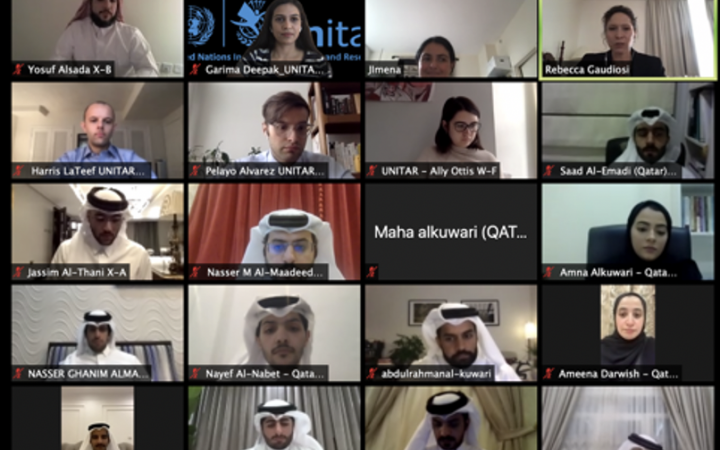 Mr. Alvarez opened the second day of the training and welcomed all the distinguished diplomats from the Permanent Mission of Qatar. He introduced the facilitators of the session - Dr. Jimena Leiva Roesch, Fellow at International Peace Institute and Dr. Rebecca Webber Gaudiosi, former U.S. Diplomat to the United Nations. They are also the authors of Negotiating at the United Nations: A Practitioner's Guide 1st Edition. All diplomats were asked to introduce themselves and mention the negotiations they had participated in, if any. 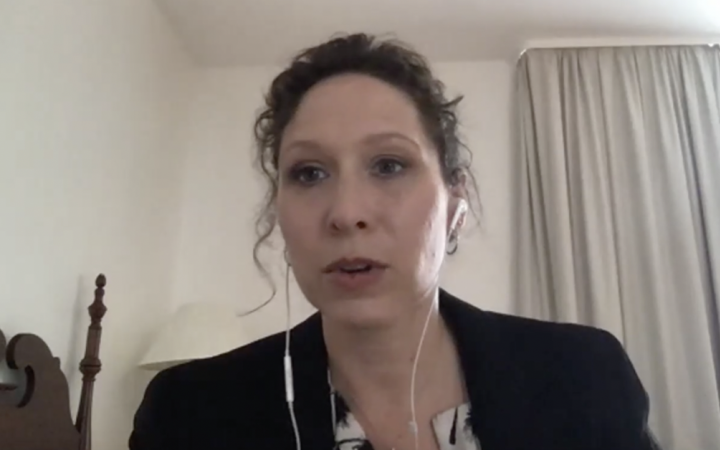 Dr. Roesch remarked that while everyone is constantly negotiating in their daily lives, this session was prepared to further sharpen the negotiators’ skills. She asked all participants to write three characteristics that they admired in a good negotiator. Two break out groups were formed over video conference tool to discuss attributes of good negotiators. Participants highlighted characteristics like good reasoning, strong language capability, organizing thoughts and ideas, information exchange, due diligence, knowing what each party wants, being in control of emotions, proactivity and creativity, and thinking solutions out of the box.

Dr. Roesch discussed the importance of being in control of emotions as it can be perceived as a sign of weakness or result in the loss of narrative. She also mentioned that sometimes humor can be used effectively to temper emotions especially in passionately charged negotiations. She also emphasized that personal views always come through and therefore it is imperative to be self-aware.

Dr. Gaudiosi explained that win-win solutions are preferred as effective negotiations are those where both sides gain something. This does not always happen, but the aim should be to inch closer through compromise on both sides. The example of one orange being desired by two children was used to illustrate that knowing the interest of the other party leads to reaching more implementable solutions. If both sides win, it contributes to building a good relationship in the long run which can also assist in the next negotiation. She also emphasized the importance of recognizing the position of the individual rather than just see a nation. Next, she asked the participants to think about a particular intention/tactic that they would like to use and the kind of negotiation they would like to do in the simulation exercise. 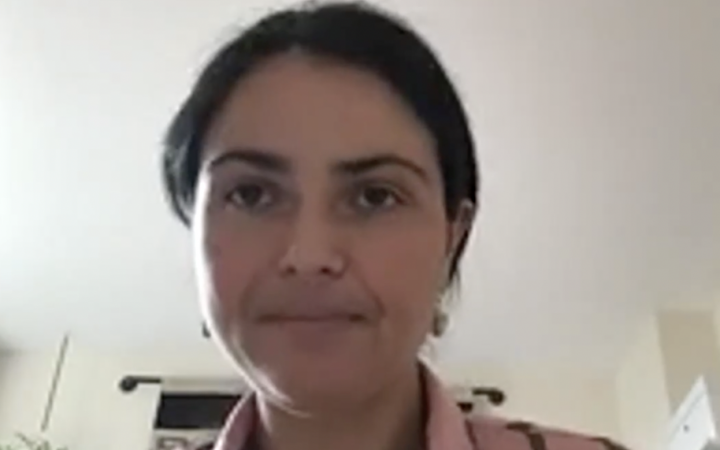 This was followed by a simulation exercise of ninety minutes. It was a bilateral negotiation between two nations – Mount X and White plains. The participants were divided into six teams of four diplomats wherein the two nations were represented by a delegation of two participants. Each nation’s delegation communicated over an instant messaging tool to discuss their negotiation strategy and then reconvened simultaneously in breakout rooms to negotiate with the two-member delegation of the other nation. Dr. Roesch and Dr. Gaudiosi were moving between the breakout rooms to observe the negotiations in each of the groups. Once all the groups had negotiated, the final outcomes of each of the six groups were discussed followed by a detailed discussion on the learnings during the negotiations such as strengths, weaknesses, priorities, timelines and optimum outcome of both the sides. A few participants reflected that they would have changed their approach when they understood the other side’s interest while others said that they would have proceeded the same way because they went into the negotiation with a win-win mindset. 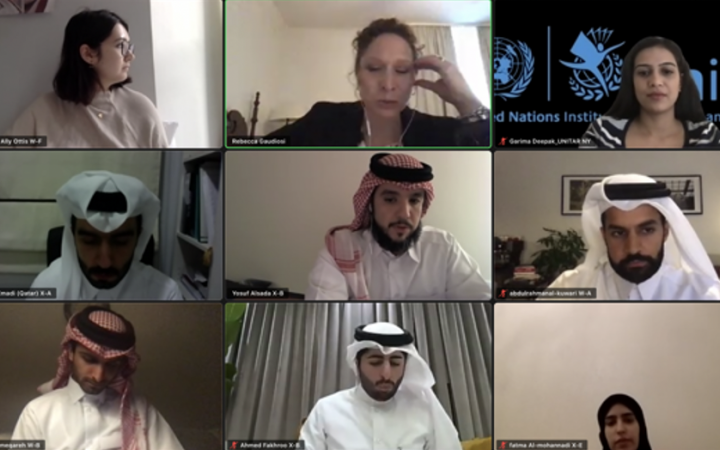 Dr. Gaudiosi remarked that in the current period of a pandemic, this is how the negotiations are being conducted i.e. via video conference tool and texts. Virtual negotiations are difficult because the absence of body language is a major hindrance and verbal cues in such a setting are very important. It was highlighted that getting to know the negotiators and seeing the person beyond the flag of the nation they represent is essential. Dr. Roesch also asked the participants to compare their experience with the intention they had written down at the beginning of the session.

The session was then joined by Dr. Wu Ye-Min from Geneva, the Deputy Permanent Representative of Singapore and co-author of Negotiating at the United Nations: A Practitioner's Guide 1st Edition, who discussed a virtual meeting between twelve countries that she had attended recently. She underscored the importance of formal and informal alliances in a negotiation and narrated her experience where she called each of the countries to warm up and spent time talking about their respective interests. Many countries appreciated the time spent in understanding their interests and it resulted in a lot of support for the proposal that was being tabled by Singapore. It helped in bargaining and emphasized the long-term interest of the countries involved. The calls with the countries also helped in forming alliances which helped in getting the proposal passed. Moreover, it served as a good platform to test the tactics and arguments and gauge the reaction of the other nations while providing perspective for rehashing the arguments.

The session concluded with the facilitators giving out five tips – (i.) Build relationships; (ii.) Understand the interest behind the motivation for better solution for all parties involved; (iii.) Engage in solving the problems creatively; (iv.) Be neutral and self-aware; and (v.) Predict the legitimacy of the solution/outcome. Dr. Gaudiosi said that the UN works together and as such each diplomat has a lot of power and great responsibility to negotiate for the betterment of the world. The multilateral approach to negotiation was emphasized. The session ended with questions and answers and a request for feedback.