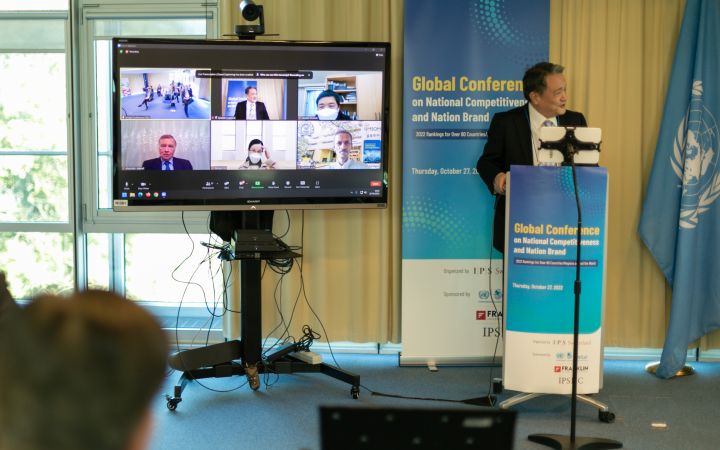 27 October, Geneva, Switzerland - UNITAR, the Institute for Industrial Policy Studies (IPS), and the Taylor Institute at Franklin University Switzerland (FUS), collaborate on National Competitiveness Report and Nations Brand Value Ranking Report. The results of the Reports were released on October 27, 2022, in a public conference by IPS and FUS, and co-hosted by UNITAR.

IMD, a Swiss business school, defines national competitiveness as a friendly business environment of a country for global firms to invest in. On the other hand, WEF is a Swiss non-profit organization that assesses national competitiveness based on the productive capability of a country’s local firms. Hence, in the 2022 IMD report, Malaysia ranked 32nd out of 63 countries, two places higher than Japan (34th) due to its friendly investment environment. Yet, according to the most recent WEF report in 2019, Japan which has local firms with high productivity was ranked 6th among 141 countries, much higher than Malaysia (27th).

By adopting the most appropriate strategy and cooperating with other countries, a country can also enhance its national competitiveness by leveraging its partners’ strengths and complementing its weaknesses. For instance, although South Korea and Switzerland are located in different regions and endowed with different resources, there is room for cooperation to enhance their competitiveness. Switzerland’s strengths particularly lie in sophisticated demand conditions and professionals with intellectual property rights and services. By contrast, South Korea shows particular strengths in related industries such as communication and electronics and entrepreneurs’ core competencies such as networking and creating new businesses. Hence, both countries can cooperate and share strengths and create synergies for improving their national competitiveness. 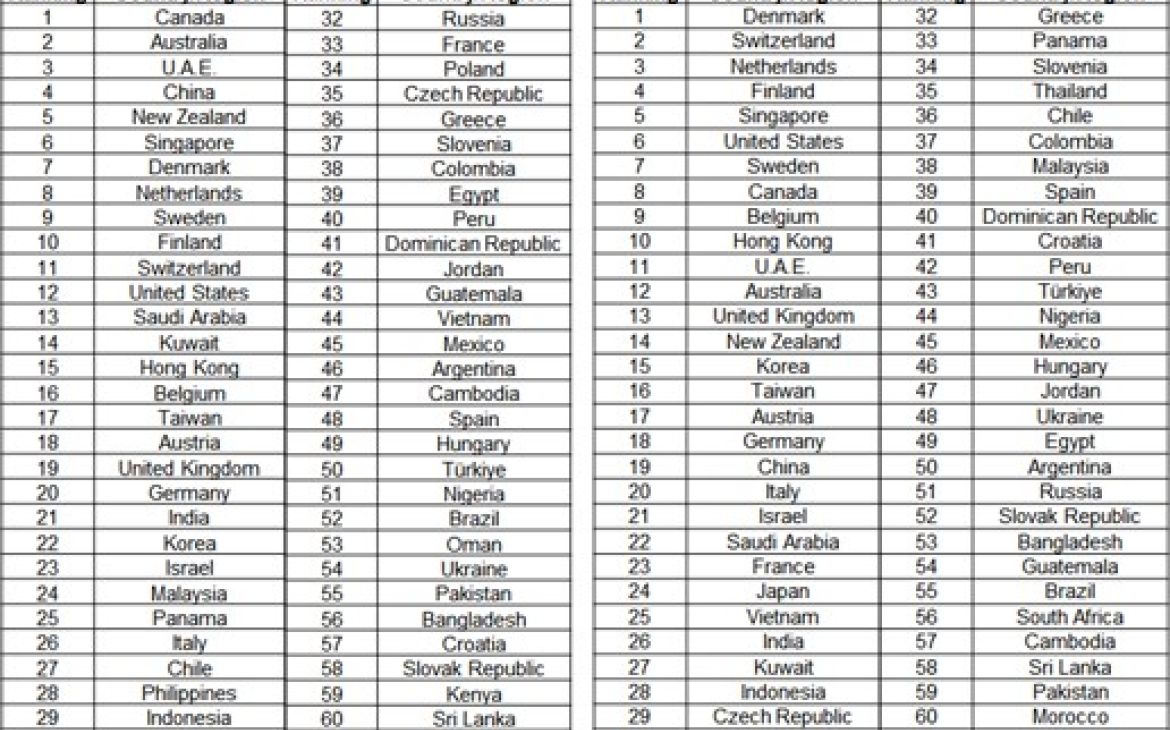 The research results of the Institute of Nation Brand Promotion (INBP) on the 2022 Nation Brand Value (NBV) were released on October 27, 2022, at the head office of the United Nations Institute for Training and Research (UNITAR) in Geneva, Switzerland.

The top 3 nations stayed the same as in the previous year: the United States ranked at the top (1st) with the NBV of USD 24.5 trillion, Germany ranked the second (2nd) with USD 15.2 trillion, and the United Kingdom ranked the third (3rd) with USD 7.6 trillion. China with USD 6.5 trillion moved to the fourth (4th) taking over France (5th) and Japan (6th) with USD 5.2 trillion and USD 4.9 trillion, respectively. The Republic of Korea (“Korea”) rose to the seventh (7th) with USD 4.7 trillion (Table 1).

INBP’s NBV Ranking is the world’s only empirical research which calculates the NBP and NBV of most, if not all, major countries in monetary terms. The base data of this research were collected from 1,318 respondents in 62 countries. Each respondent was asked to evaluate each of the 39 major countries on 12 issues. INBP conducted this research for 20 consecutive years since 2002.

UNITAR Chief at the Office of the Executive Director, Jonas Haertle, has initiated and supported the research. INBP Chair Dong-sung Cho, Emeritus Professor at Seoul National University Business School, made the presentation.

The importance of Nation Brand Power: Cases of Korea and China

To achieve a high score on NBV, a nation must have high Nation Brand Earnings (NBE) and Nation Brand Power (NBP), as NBV is a result of NBE multiplied by NBP.

NBE is 10-year aggregated figures of a nation’s exports of products and services, assuming the effect of NBP lasts at least 10 years.

NBP is determined by the following formula: Adding National Competitiveness (NC) and Psychological Proximity (PP), and multiplying this by Nation Brand Strategy (NBS). In a word, a nation’s brand power is determined by both economic and non-economic factors and the nation’s integrated efforts to foster it.

Among the five elements that determine the relationship, Korea ranked the first (1st) in Current Relationships, fourth (4th) in Past Relationship, and sixth (6th) in Willingness to Visit, which all led to the rise in PP from the fourteenth (14th) in 2021 to the eleventh (11th) in 2022.

NBS is determined by four strategic entities of a nation: people, business, civil organizations, and government.

Korea’s People, Businesses, and Government were all highly valued as strategic entities in implementing NBS. People were steadily ranked third (3rd) and Businesses fourth (4th) over the past three consecutive years. The Government climbed from the sixth (6th) to the fourth (4th), due to the globally recognized government’s effective leadership during the Corona pandemic.

China took the first (1st) in Nation Brand Earnings (NBE) with USD 49 trillion but ranked the twentieth (20th) in NBP, which resulted in the fourth (4th) in NBV. China’s fall in NBP was mostly driven by low PP at the thirty-third (33rd) and stagnant NBS at the twentieth (20th) over the recent two years.

Ranking results show how to improve Nation Brand Strategy: A Case of Switzerland

The result of this research allows any of the 39 nations studied to establish a set of strategies to enhance their NBV in the future. For example, Switzerland’s NBV has been stagnant at the eleventh (11th) for the past three years. Switzerland scored very high on Psychological Proximity (5th), much driven by positive images associated with human rights at the top (1st), stability at the top(1st) and morality at the sixth (6th). However, its evaluation of strategic entities’ roles in implementing NBV remained relatively low, resulting in the twelfth (12th) in people, the eighth (8th) in businesses, and the ninth (9th) in government. Moreover, this evaluation of NBS remained stagnant for the past 10 years without much improvement. Thus, Switzerland’s relatively low NBV at the eleventh (11th) due to its low NBS components (12th, 8th, and 9th) despite its high PP components (1st, 1st, and 6th) suggests that Switzerland can enhance NBV through better NBS led by people, businesses, and government.

This research result also shows the NBP of any of the 39 nations as perceived by 4 regions of the Americas, Asia, Europe and Africa, and also by 62 countries. Switzerland, for example, received relatively high PP scores from the Americas with 5.10 and Europe with 5.14, compared to low PP from Asia and Africa with identical 4.94. Breaking down into specific components, a different picture emerges. From Asia, Switzerland received a high image score of 5.17 and a low relationship score of 4.76. From Europe, it received a low image score of 5.11 and a high relationship score of 5.16. Asians have a more favourable image of Switzerland, without close relationship. 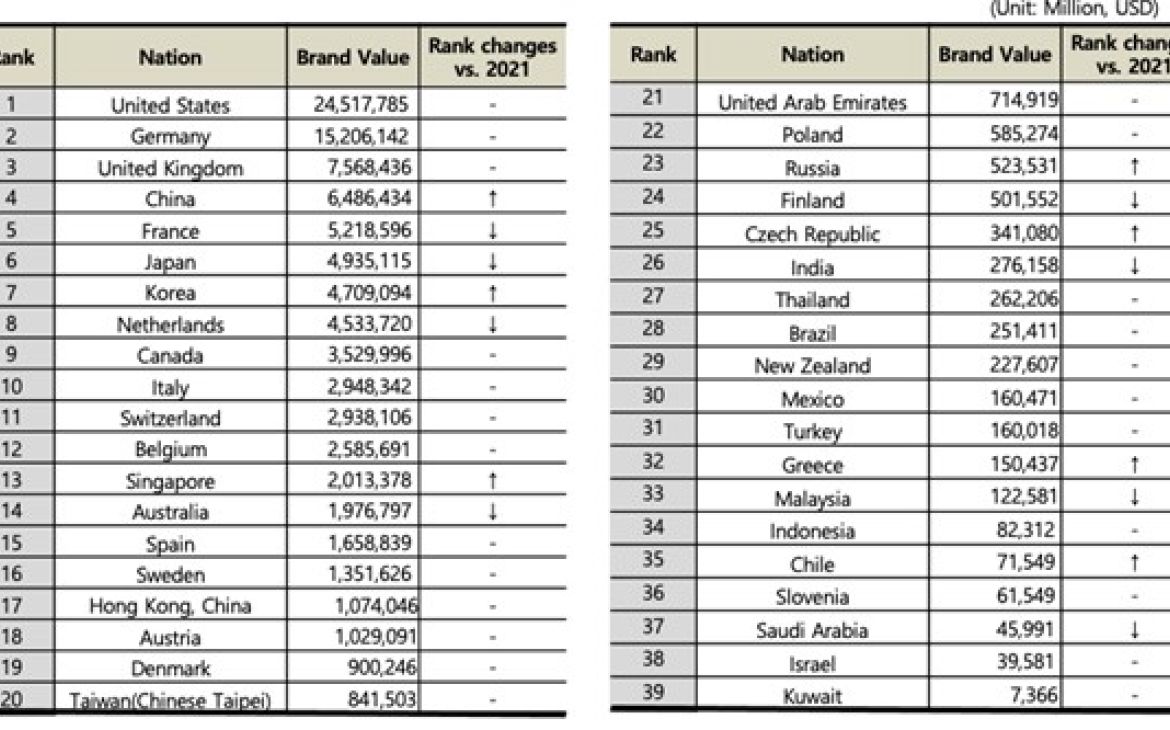 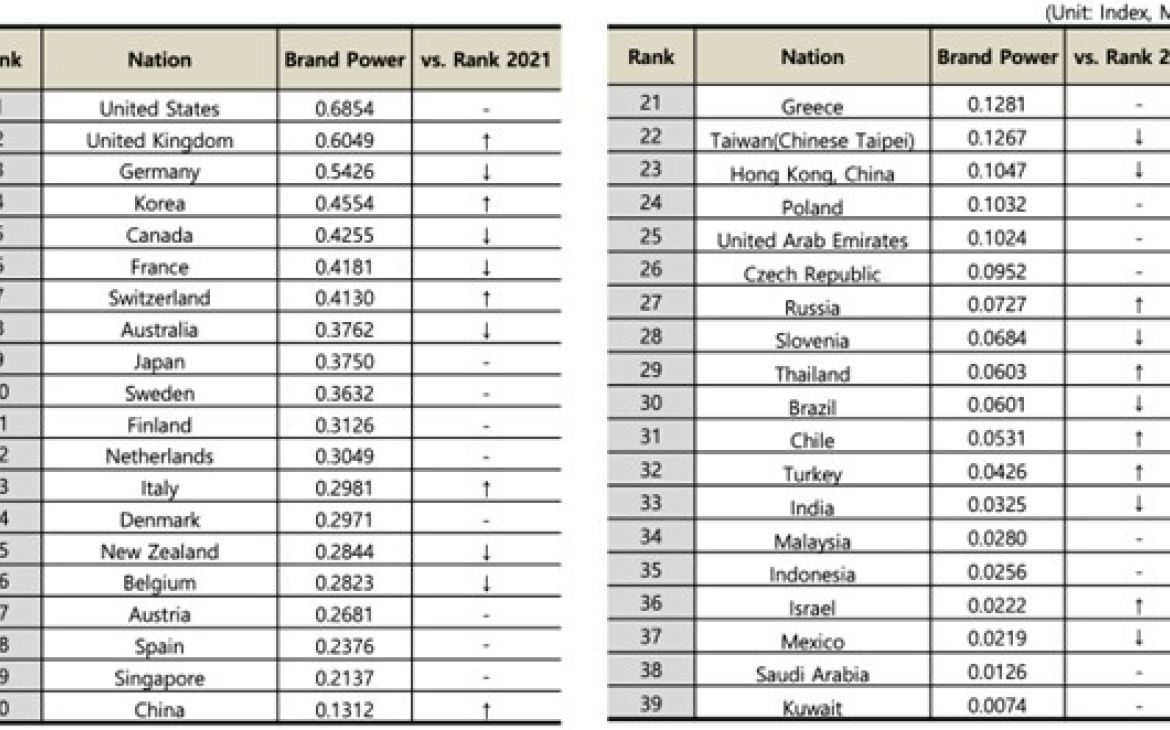 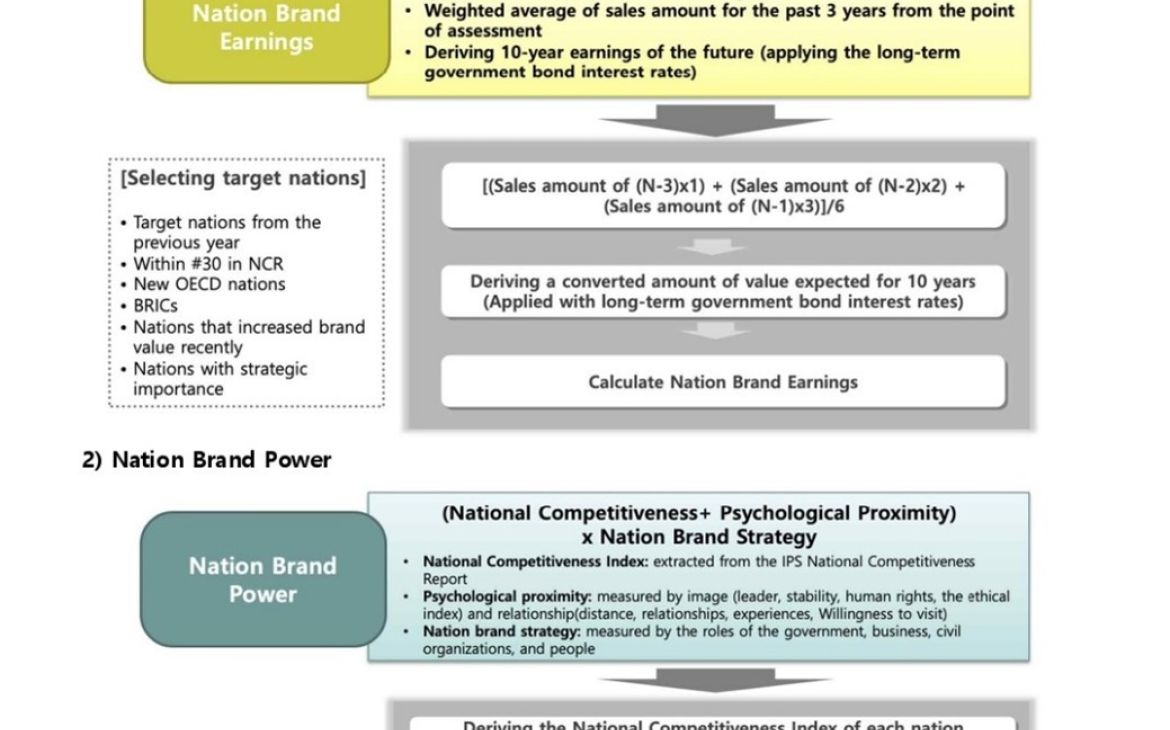 IPS was established in South Korea in 1993 and moved its research activities to Geneva, Switzerland in 2020 to globalize the national competitiveness research, in cooperation with UNITAR and Taylor Institute of Franklin University Switzerland.

ABOUT THE FUS TAYLOR INSTITUTE

The Taylor Institute at Franklin University Switzerland develops and manages Executive, Research and Graduate programs related to business and management. The Institute brings together a learning ecosystem made up of multi-stakeholders including Faculty, partner Universities, Business and Organizations, Thought Leaders and Think Tanks. The Institute aims to prepare critical thinkers who are culturally literate, ethically aware, intellectually courageous and business savvy. We envision leaders that become responsible, compassionate, and collaborative in an increasingly complex and interconnected world. https://www.fus.edu/research/taylor-institute

The United Nations Institute for Training and Research (UNITAR) is a principal training arm of the United Nations, working in every region of the world. We empower individuals, governments and organizations through knowledge and learning to effectively overcome contemporary global challenges. UNITAR was established in 1965 as an autonomous body within the United Nations with the mandate of enhancing the effectiveness of the work of the United Nations and its Member States. In 2020, UNITAR’s reach extended to more than 300,000 beneficiaries through mostly e-learning and webinars, face-to-face seminars and workshops, or other training-related events. (www.unitar.org)