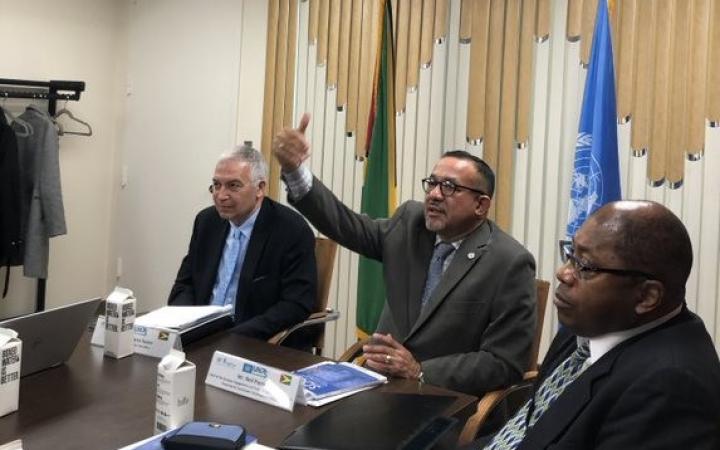 25 - 27 February, New York, USA - UNITAR coordinated the Core Diplomatic Training for the Permanent Mission of the Co-operative Republic of Guyana to the United Nations which began Tuesday 25 February 2020 and concluded Thursday 27 February 2020.  The Guyana mission is preparing for the upcoming chairmanship and coordinating the activities of the G77+ China.  To begin, the participants and facilitators were welcomed by H.E. Mr. Neil Pierre, Chief of the Strategic Engagement and Policy Integration Branch in the Financing for Sustainable Development Office.  He then invited Mr. Marco Suazo, head of the UNITAR office in New York, to deliver remarks.  Mr. Suazo outlined the structure of the training and encouraged active participation and interaction among the participants.  The participants then introduced themselves to their colleagues and upon conclusion, H.E. Dr. David O’Connor, Permanent Observer of IUCN to the United Nations began his briefing on the Sustainable Development Goals and the 2030 Agenda. 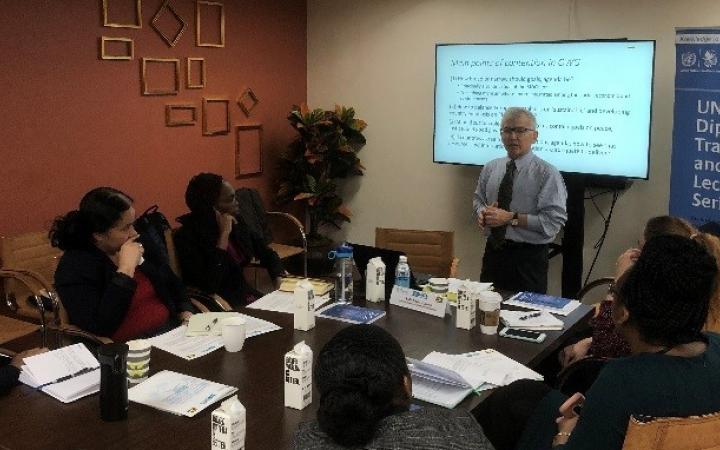 His remarks contextualized the SDGs within the history of the United Nations as we approach 75th anniversary of its founding.  In particular, he emphasized the SDGs growth out of the Millennium Development Goals and the Rio and Rio+20 Conferences.  He described the crafting of the SDGs and the 2030 Agenda for Sustainable Development, with reference particular to the operation of the Open Working Group and how concerns were addressed with the OWG to strengthen the SDGs overall.  Dr. O’Connor pointed out the key features of the SDGs and the 2030 Agenda are that they are an integrated and indivisible, built on universal goals, encompassing a transformative agenda.

Dr. O’Connor offered an assessment of the progress being made pointing to sense of ownership on the part of governments and initial enthusiasm of large corporations.  Still, he brought to light the biggest challenges the agenda faces including maintenance of political will through the decade and the ambition of the agenda itself.  He concluded by suggesting that we must move from incremental to transformative change. He added that we must accelerate changes already underway in order to achieve development which meets the needs of the present without compromising or undermining the ability of future generations to meet their own needs. 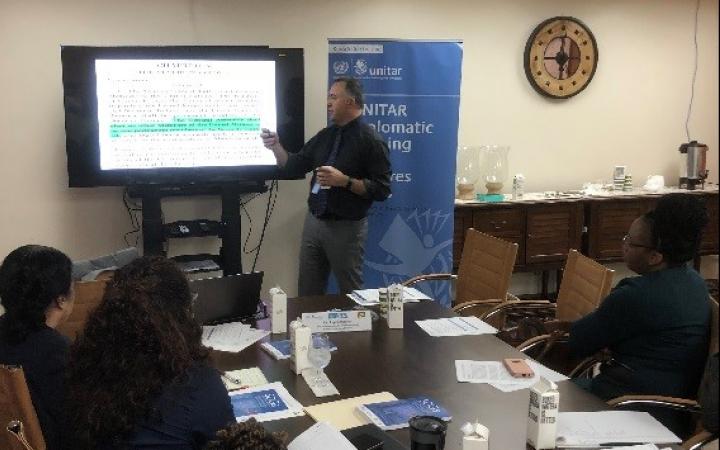 Finally, Dr. Angelov went through the principal organs of the United Nations describing the unique roles that each play in the functioning of the whole system.  He elaborated on how they have changed over time, given the expansion of the number of member states or the personality of the Secretary-General.  On a more personal note, Dr. Angelov shared some anecdotal experiences about his time working in the United Nations to describe what being a diplomat is all about.  This concluded the first day of the Core Diplomatic Training for the Permanent Mission of the Co-operative Republic of Guyana to the United Nations. 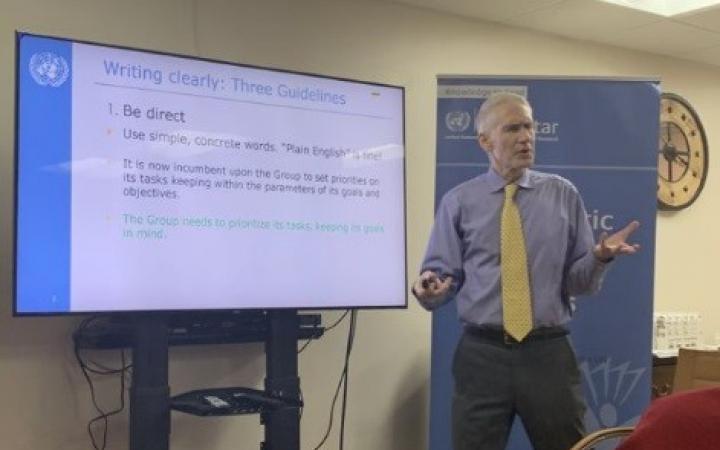 The second day of Core Diplomatic Training for the Permanent Mission of the Co-operative Republic of Guyana to the United Nations was facilitated by Mr. Sandy Singer, a Lecturer and Instructor in the UN-LCP English Language Programme, and Consultant and Professor in the field of Written and Oral Communication for Business. He delivered a course on Report Writing, which focused on major challenges and best practices for UN writing. Specifically, Mr. Singer elaborated on the nuances of language and writing style for UN diplomats.

Mr. Singer began with a lecture on knowing your purpose and your audience, as this ultimately informs the content and tone of a report. He stressed the importance of concision and the utilization of “Plain English” in conveying a message. Mr. Singer then led the group of Guyana Diplomats through hands-on exercises that reinforced the need for direct language in UN writing.

Mr. Singer also emphasized the differences between active and passive language and further elaborated on the appropriate circumstances in which to use both. This led to the discussion on tone and how to adapt tone to fit the type of report, its purpose, and its audience. Mr. Singer recommended using euphemisms, passive voice, and qualifiers in softening tone, and additionally touched on the inclusion of gender-sensitive language in writing for the UN. 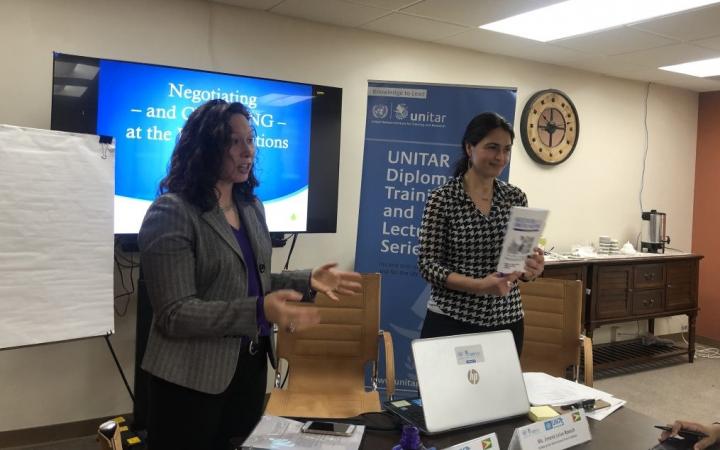 The third and final day of the Core Diplomatic Training for the Co-operative Republic of Guyana Mission to the United Nations focused on Negotiation.  The facilitators for the briefing were Ms. Jimena Leiva-Roesch, Fellow at the International Peace Institute, and Dr. Rebecca Webber Gaudiosi, Former US Diplomat to the United Nations.  After brief introductions to get acquainted with the participants, Ms. Leiva-Roesch and Dr. Gaudiosi discussed the role of negotiations at the United Nations and the value of having a roadmap for conducting negotiations.  Because the Guyana Mission will be chairing the G77, the participants were led in a discussion over common attributes of an effective chair.  Ms. Leiva-Roesch and Dr. Gaudiosi elaborated by emphasizing the negotiator as a person, and sharing lessons learned from working within the United Nations system to add to one’s negotiator toolkit.

The discussion then turned to the role of asymmetric power in negotiation and how one mitigates the influence of potential disparities within a negotiation.  To illustrate this, the participants were guided in a simulation exercise in which they role-played the parts of diplomats representing fictional countries negotiating over trade, resource disputes, and environmental issues.  After one round of negotiation, the participants exchanged briefings and assumed the role of their counterparts to discover ways in which negotiation changed based on the new information they were provided.