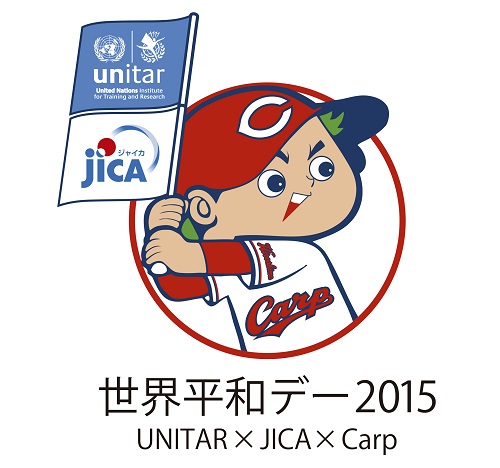 The Afghanistan National Women’s Football Team, on the final day of their UNITAR Leadership and Communication Training Programme, were special guests to the game. The captain was invited to throw the first pitch. The players also got involved with giving tips to budding Japanese youth soccer players. 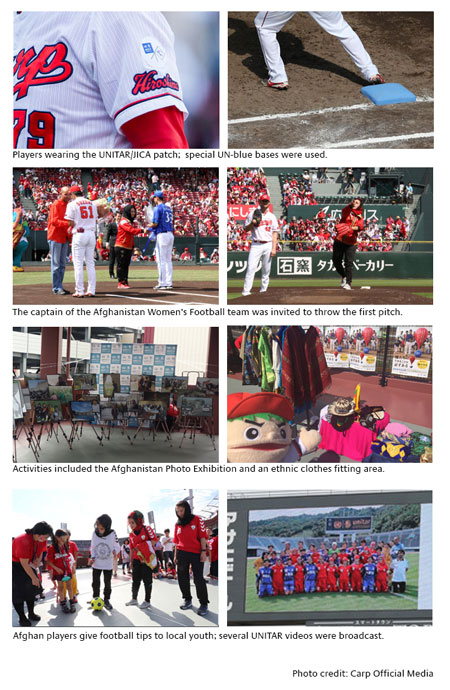 Two special displays in the stadium introduced the activities of the Office, the appointment of UNITAR Goodwill Ambassador Hiroki Kuroda and a selection of images from the Afghanistan Photo Exhibition. In addition to face-painting, an ethnic clothing fitting area allowed supporters to try on and experience clothes from a range of different cultures from around the world. Special collaboration stickers, flyers and fans, incorporating the Carp figure and the UNITAR logo were distributed to over 6,000 people over the day.

On the field, the normally white bases were changed to a UN blue and the players wore patches with the UNITAR and JICA logo. Several UNITAR-related videos were broadcast on the stadium screen, including a video showing Hiroshima and UNITAR’s important role in promoting peace, as well as highlights from the football peace match held between local women’s team, Ange Violet, and the Afghanistan Women’s Football team. During an innings-break, UNITAR and JICA staff and volunteers were invited onto the field and introduced to a crowd of over 30,000 people.

This special collaboration event increased the local awareness of the activities of the UNITAR Hiroshima Office, and how we are taking Hiroshima’s message of hope, resilience, and post-conflict reconstruction to the world.

We thank everyone who visited us, and especially thank Hiroshima Toyo Carp for their collaboration and support of this event.