18 October 2019, New York, USA – The United Nations Institute for Training and Research (UNITAR) New York Office, in partnership with the Permanent Mission of Qatar to the United Nations, B4 Development, and Generation Amazing, hosted an event on using behavioral insights and sports in preventing violent extremism. The event took place in Conference Room 6 at UN Headquarters on 18 October 2019.

The event began with introductory remarks by the Permanent Representative to Qatar to the United Nations, H.E. Sheikha Alya Ahmed bin Saif Al-Thani, followed by a video message from the Secretary General of the Supreme Committee for Delivery and Legacy, H.E. Mr. Hassan Al Thawadi who spoke specifically on the upcoming 2020 World Cup which would be held in Doha, Qatar. He explained that sports can be utilised to provide youth with opportunities and stressed that those opportunities help lead youth away from joining violent extremist groups. Mr. Marco Suazo, Head of UNITAR New York Office then welcomed participants and gave a token of appreciation to Qatar, underscoring that this UNITAR Behavioural Insights programme in New York was the fourth of its kind. The event was Moderated by Senior Advisor to the Secretary General of the Supreme Committee for Delivery & Legacy - B4Development, Dr. Fadi Makki. The opening remarks reminded the audience of the importance of Behavioral Insights (BI) and sports in the world, and how they affect people – specifically youth – in very considerable ways. Keynote speaker, Prof. Cass Sunstein also provided some introductory remarks, focusing on the UN and how it can be linked to BI in order to further its success in influencing peoples’ lives.

Mr. Nasser Al Khori Director of Programmes for Generation Amazing, then provided a brief explanation on Generation Amazing and how it uses sport, specifically soccer, to teach disadvantaged youth life skills like communication and teamwork. He stated his belief in using sports to unite people and noted that further research was needed in order to determine the best way to help disadvantaged youth. As of 2019, Generation Amazing is reaching over 500,000 total beneficiaries in over 8 countries. Ms. Marie Paule Roudil, Director of UNESCO Liaison Office New York and UNESCO Representative to the United Nations, made a presentation where she stressed on the importance of addressing the root causes of violent extremism. She listed three aspects of sports that can help prevent violent extremism: Sports (1) provide an identity - a place where people feel a part of a community, (2) help teach skills of resilience and confidence in youth and (3) can teach universal values like respect and teamwork. Finally, she noted the importance that every member-state of the UN supports the common goal of lasting and sustainable peace. 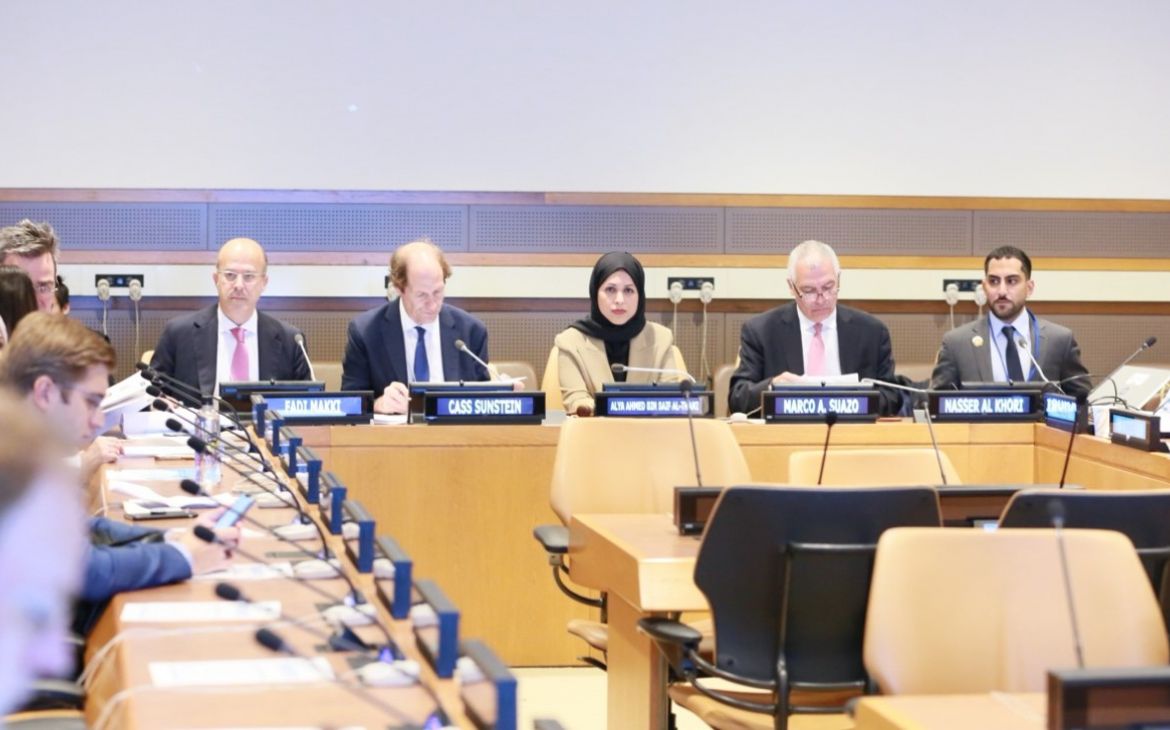 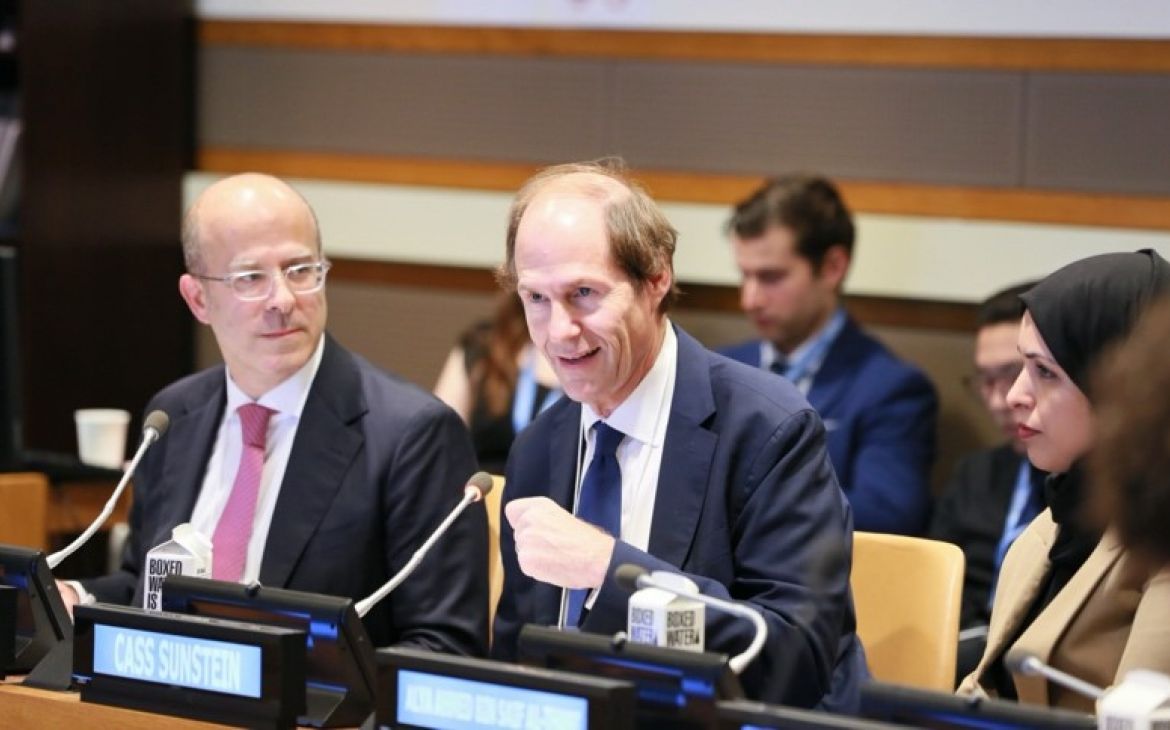 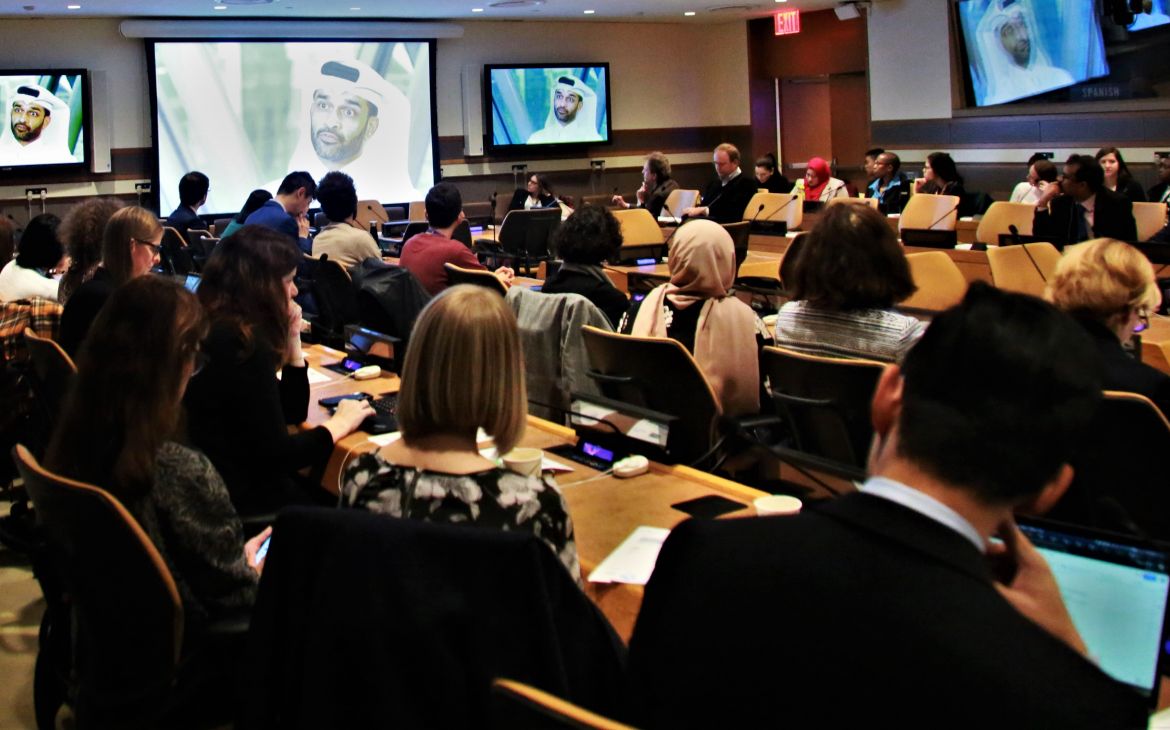 The next Speaker, Mr. Richard Blewitt, The International Federation of Red Cross and Red Crescent Societies (IFRC) representative to the UN, reiterated how sports can be, and have been, used to break down existing barriers. He explained the IFRC’s aim of promoting peace and nonviolence through nondiscrimination and dialogue, as well as how sports can be used to help achieve these. He provided many examples of the IFRC’s work with sports including in Myanmar and Uganda. He also touched on the IFRC’s policy position on encouraging sports for inclusion; maximizing sports’ positive impacts; and partnering with sport focused organizations. He concluded by bringing up two areas of concern he had regarding the agenda which were the “lack of a long-term and consistent approach”, and “the relative absence of humanitarian work surrounding the issue of mental health.”

Following Mr. Blewitt’s presentation, Mr. Daniel Shephard, IS-CS Co-Founder; B4Solution Labs; Nudge Lebanon Board of Trustees and former White House Social and Behavioral Sciences Team, spoke, focusing on the BI aspect of preventing and countering violent extremism. He brought up contact theory, i.e. how using a platform like sports to bring people into contact could help reduce prejudices. He also spoke on the possibility of using BI to increase the chances of providing an environment conducive to successful interactions between people. He noted that all these were subject to more experimentation. These experiments would also benefit the study of other sports besides soccer and understanding why cohesion between people or groups happen. Mr. Shephard finished by explaining his vision for layering BI and sports together in order to enhance the effect and scalability of violence prevention.

The next speaker was Mr. Jon Roozenbeek, PhD Student and Senior Research Affiliate at the Department of Psychology at the Cambridge University; co-founder of the “Bad News” game. Like Mr. Shephard, Mr. Roozenbeek introduced a theory to the audience - the theory of psychological inoculation. This theory states that psychological manipulation can be prevented using a vaccine of sorts. Although the scalability is a work in progress, the “Bad News” game showed very persuasive results as far as aiding people in recognizing false propaganda. He said that the next goal for him and his partner is to spread the prototype for a violent extremist game to certain individuals in order to test for results. He finished by explaining that games, like sports, introduce a competitive but fun nature into learning which makes them easier to spread.

The subsequent speaker was Mr. Mehdi Knani, Political Affairs Officer, The United Nations Office of Counter-Terrorism (UNOCT), who explained how UNOCT is involved in the realm of preventing violent extremism. As the chair of an intra-agency group on counterterrorism, UNOCT currently has 40 projects on preventing and countering violent extremism that benefit over 90 member states. He made some recommendations which included tailoring implementation techniques to specific contexts, and not changing the core of sports when linking them to violence prevention. He also brought up the important questions of the goals, standards and limits of Preventing Violent Extremism (PVE) in sports.  At this point, the panelists fielded questions from the audience which included looking at the ethics of the “Bad News” game; how gender plays a role in BI and Sports in PVE, and Qatar’s direct involvement in the 2020 world cup. 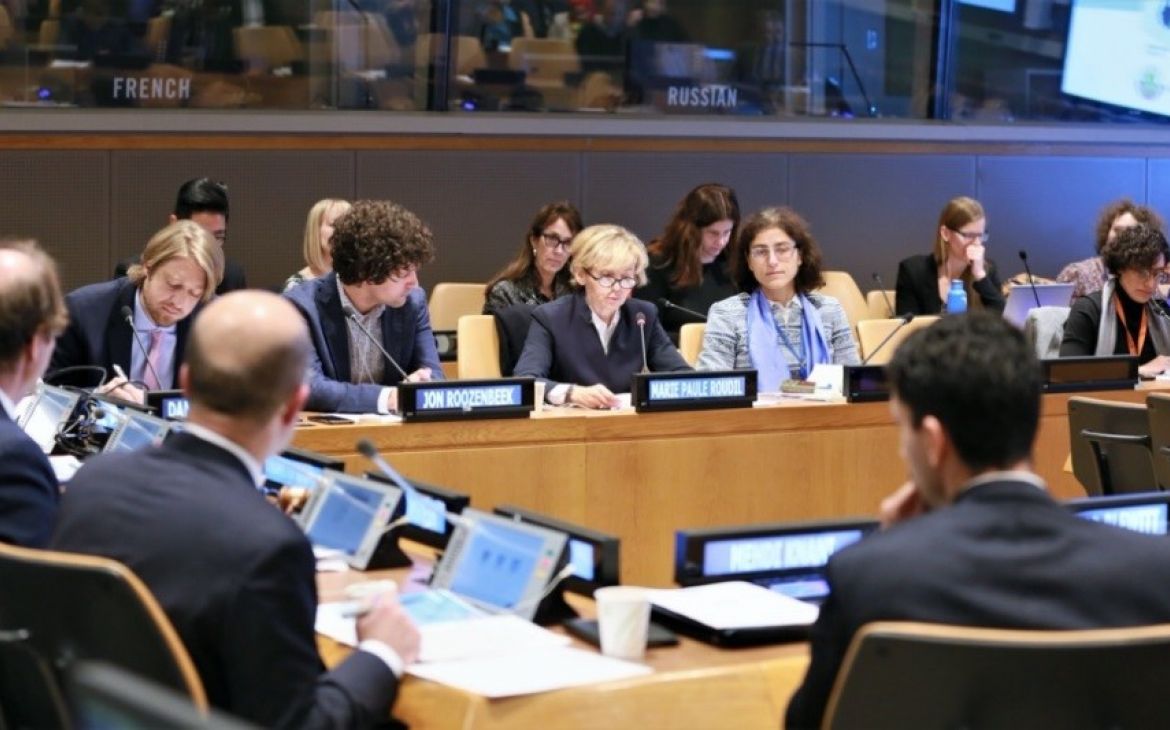 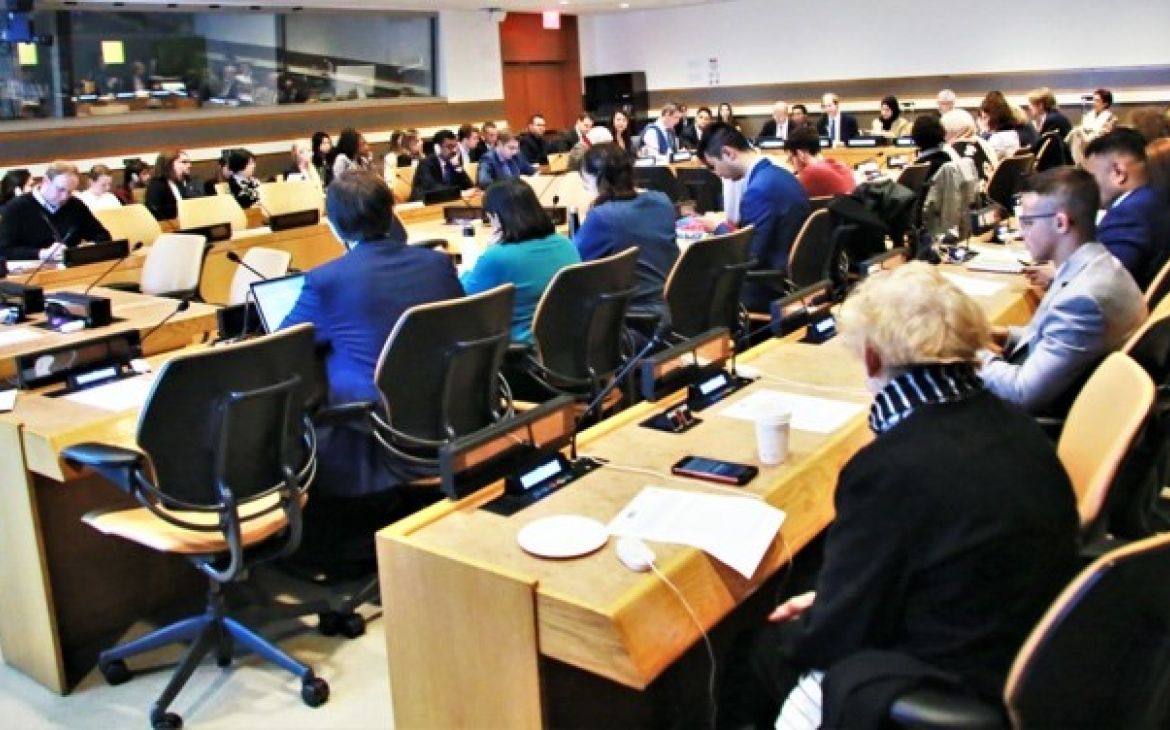 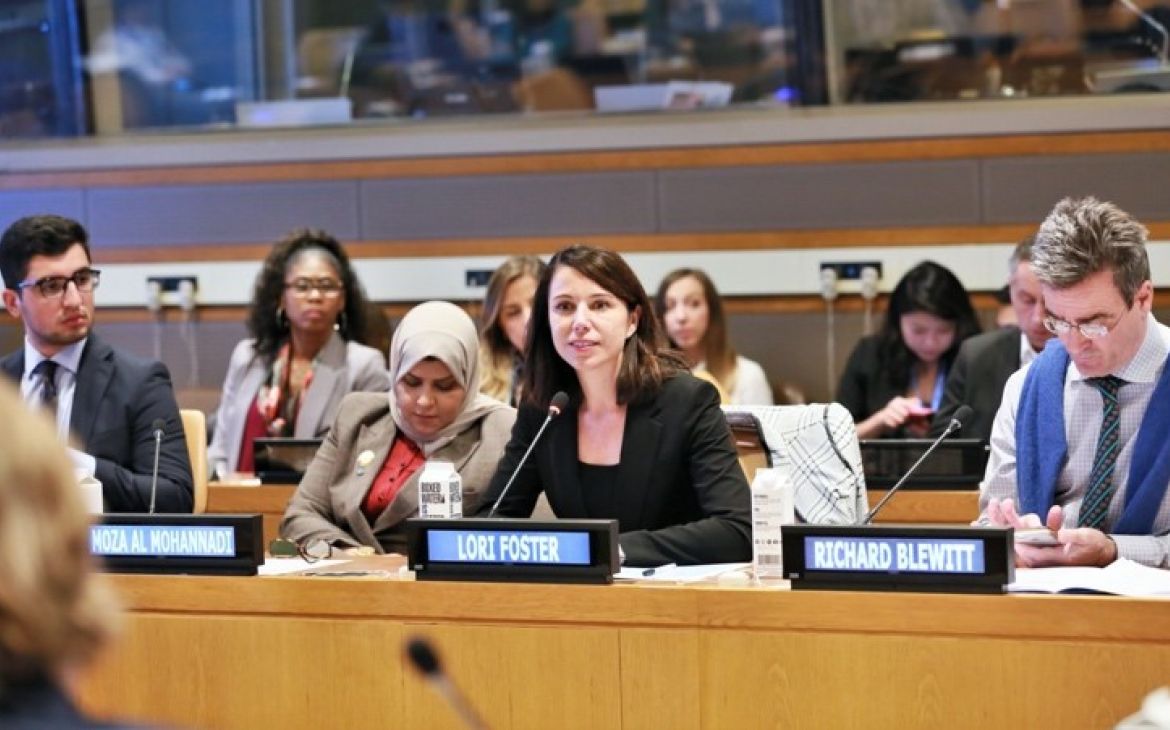 The final two speakers of the day were Dr. Lori Foster, Professor of Psychology, North Carolina State University & the University of Cape Town, and the keynote speaker: Professor Cass Sunstein, Robert Walmsley University Professor at Harvard University. Dr. Foster spoke on how the Sustainable Development Goals play into Preventing Violent Extremism (PVE), being people and planet focused. She then explored the importance of BI in the SDGs, and how behavior that falls between intention and action can be swayed one way or another. She finished by mentioning self-determination theory which states that motivation is not only quantitative, but also qualitative, therefore, a group can influence someone’s conviction in their mission, therefore increasing the quality of their motivation.  Prof. Sunstein, the final panelist of the day, began by explaining group polarization using a story from his own experiences. Group polarization is the idea or tendency for a group to make decisions that are more extreme than the initial inclination of its members. Based off this idea, Professor Sunstein then cited Alex Kruger in saying that violent extremism is a result of social networking - who speaks to whom about what topics. He then made an amendment to the acronym E.A.S.T which lays out the qualities of a program to make said program effective: Easy, Attractive, Social and Timely. The amendment he made was adding “fun” to the list, stating that any program or plan that is advertised as fun will be more successful in marketing and in implementation than the same plan not advertised as fun. Sports and games do this, which Professor Sunstein says makes them ideal platforms for addressing violent extremism. He the explored the topic of social norms, specifically the approaching social norms of what will be normal and how that influences people, and how that ties into interdependencies and action thresholds; how many people need to act before you do?

After Professor Sunstein concluded his presentation, he also partook in an interactive dialogue with the audience and other panelists. The event ended with closing remarks by Dr. Fadi Makki who echoed the importance of BI and sports in violence prevention. He thanked UNITAR, the Permanent Mission of Qatar, and Generation Amazing for helping organise this insightful programme. 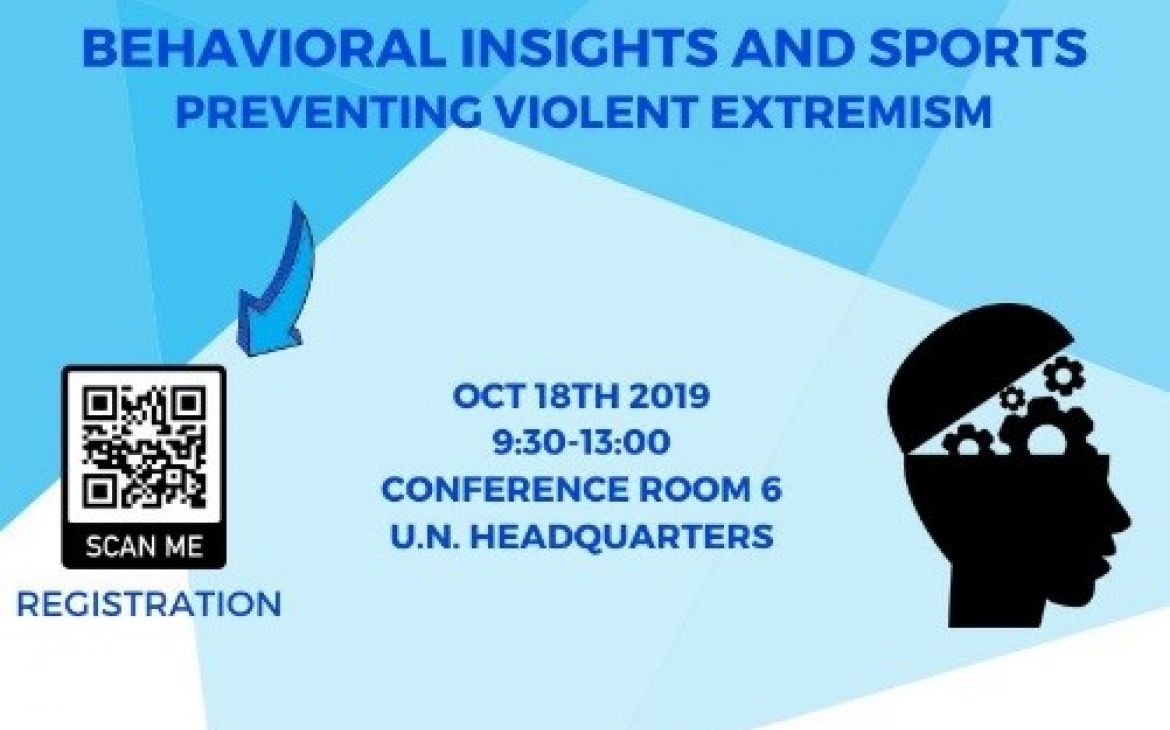 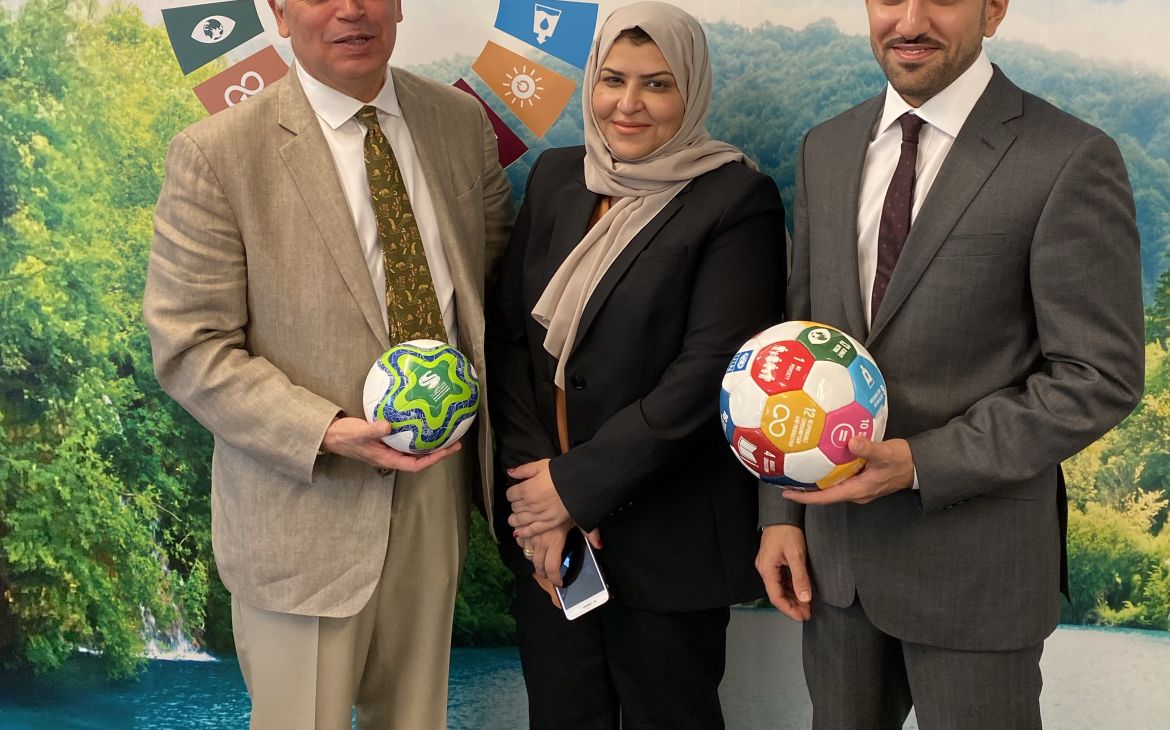