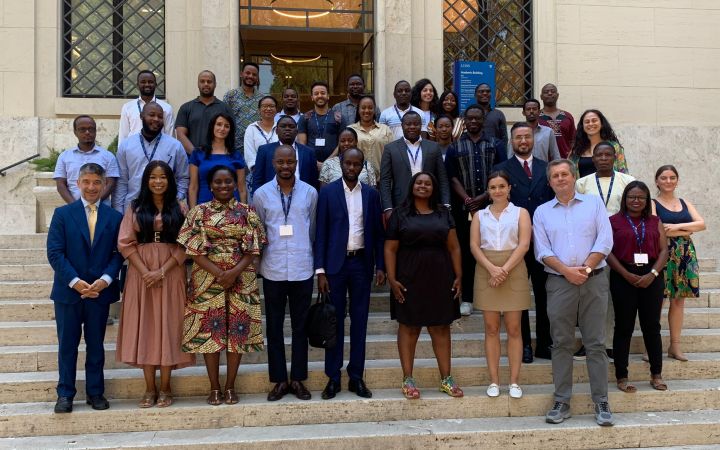 22 July 2022, Rome, Italy – The United Nations Institute for Training and Research (UNITAR) and Luiss Guido Carli (Luiss) hosted the closing session of the jointly created Executive Master in Global Public Diplomacy and Sustainable Development in Rome. Attended by the participants of the Master Programme as well as by UNITAR and Luiss staff, the successful closing session marked the end of the equally fruitful Programme. Closing remarks to formalize the conclusion of the event were also delivered by H.E. Mr. Fabrizio Lobasso, Deputy Director for the Subsaharian Africa Division at the Italian Ministry of Foreign Affairs and International Cooperation.

With the objective of training African diplomats in understanding issues and concepts in world affairs and international relations from a European and Italian perspective, the Programme invited 30 diplomats from a priority group of African States to complete the Executive Master. Supported by the Italian Ministry of Foreign Affairs and International Cooperation, the Programme offered a unique opportunity to consolidate the relationship between Africa and Italy within a global and multilateral approach. By the same token, during his concluding remarks Mr. Lobasso also renewed his encouragement for students to highlight their unique national and regional perspectives throughout their final assignment for the programme, in order to create a platform for dialogue and facilitate the exchange of information between Africa and Italy, as well as the EU more broadly.

During the first part of the Programme, UNITAR administered eight online courses that focused on enhancing participants’ core diplomatic skills. Thematic areas that were covered included “Diplomatic Protocol and Etiquette”, “Negotiation Skills and Techniques”, and “Public Diplomacy in a Multilateral World”.

The second phase of the Programme was completed this month in Rome, where participants attended an in-person, three week-long intensive programme. During the three weeks, the African diplomats engaged in courses ranging from “Italy and Africa: Current Policies and Future Developments” to “World Politics and G2G Diplomacy”. While the diplomats were in Rome, their understanding of the international community in Rome was strengthened by attending institutional visits to national and international organizations. These included visits to the Italian Ministry of Foreign Affairs, the Ministry of Defense, FAO, EU Delegation and Presidency of the Republic, as well as Confindustria, Italy’s Association of Businesses.

Overall, the Master was received incredibly well by participants who stated, for example: “All courses were very useful! I really enjoyed modules such as International Relations Theory and Cultural Diplomacy because they were very informative, broadened my knowledge, and made me curious to want to learn more”. Others emphasized that the practical approach of UNITAR’s workshops helped them in their professional life: “The workshops covered an area that I was pretty much lacking in my work. They really enriched my understanding and knowledge, and I am now better placed to execute my responsibility”.