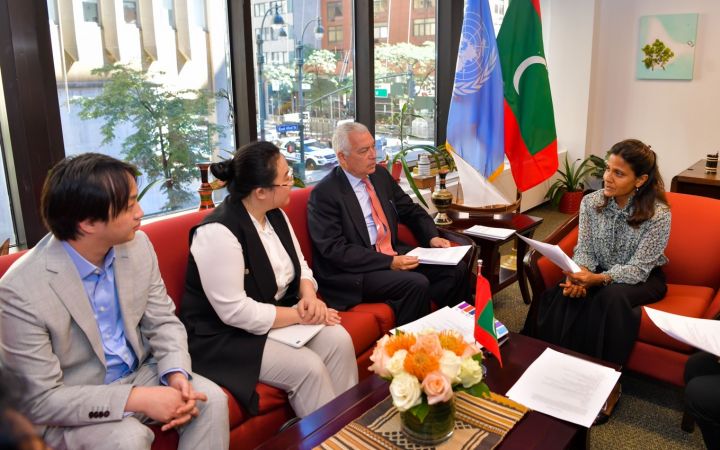 24 September 2021, New York, USA – UNITAR New York Office and The Global Foundation for the Performing Arts (GFPA) met with the First Lady of the Republic of Maldives on Friday, 24 September 2021. This productive meeting has covered a wide range of topics, such as developing SDG-focused training programs, providing public art education resources, among others.

The meeting was attended by H.E. Fazna Ahmed, the First Lady of the Republic; H.E. Thilmeeza Hussain, the Permanent Representative of the Republic of Maldives to the United Nations; Huda Ali Shareef, the Minister Counsellor of the Maldives Mission; Ms. Aminath Raeefa, the Frist Lady’s Personal Aide; Mr. Marco Suazo, the Head of the United Nations Institute for Training and Research (UNITAR) office in New York; Ms. Lucia J. Guo, Executive Director of the GFPA; and Mr. Byron Zhou, the Pianist on the artist roaster of the GFPA.

The goal of this meeting was to explore opportunities to collaborate between the GFPA and the Republic of Maldives. In the beginning of the conversation, Mr. Suazo introduced the responsibilities and the roles of UNITAR.  UNITAR dedicates itself in supporting the UN member states. It’s special focus on the Sustainable Development Goals (SDGs), and its commitment in providing inclusive resources to disadvantaged communities and population have opened multiple avenues for collaborations between itself and a diverse spectrum of partners such as the GFPA. 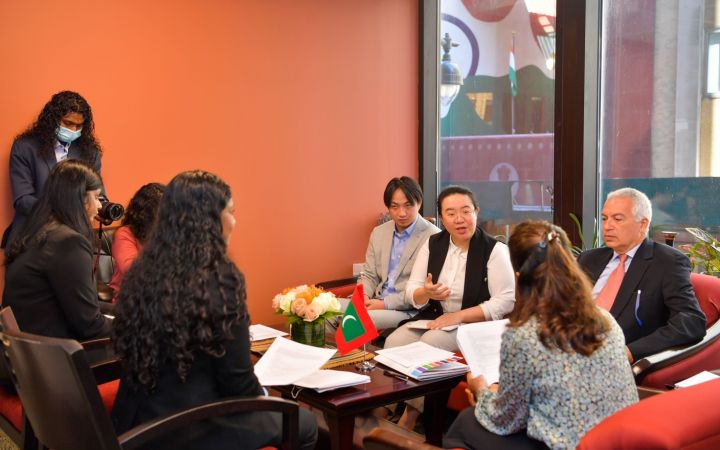 Following the introduction, Ms. Guo debriefed on GFPA’s recent works and the focuses of. As a global-oriented, artists-focused, and forward-looking institution, GFPA has been offering recovery tools and resources to struggling artists, and those who may significantly benefit from free art education. Two proposals have been offered by GFPA: one was a virtual conference on art therapy, the other was a pre-recorded series of lectures supplemented by in-person seminars. Events such as live concert were also mentioned during the conversation.

The First Lady expressed her excitement, and she believed that such programmes would benefit not only Maldives as a country, but also children who are in need. Ms. Guo and Mr. Suazo agreed that given GFPA’s extensive experience in designing tailored children and young adult art education, GFPA will have the capacity to create a programme that is suitable for Maldives’ geographical, cultural, and socio-economic background.

“Leaving no one behind” is the central, transformative promise of the 2030 Agenda for SDGs. It is also the idea that unites, guides, and inspires the GFPA, the Republic of Maldives, and the UNITAR. This meeting has sat a solid foundation for future collaborations between the three parties, and it has also created a hopeful blueprint for projects that will benefit more who are in need.