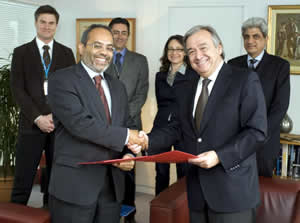 UNITAR Executive Director Carlos Lopes (shown in the photo on the left, front left) and the High Commissioner for Refugees António Guterres (front right) signed a comprehensive agreement concerning the support to be provided by UNITAR Operational Satellite Applications Programme (UNOSAT) to UNHCR. The agreement includes cooperation in various areas to support UNHCR existing geographic information efforts as well UNOSAT operational services during emergency and for camp monitoring. The agreement is an evolution of the standard cooperation framework agreements signed over the years with a number of UN agencies and aims at supplementing UNHCR geographic information capacity in various areas of GIS while guaranteeing access to the latest products and services implemented by UNOSAT in the specific area of satellite analysis and human security monitoring.

As UNOSAT manager Francesco Pisano explains, “it is an evolution in that we have been consolidating new capability, assets and tools into a centre of excellence capable of supporting UN agencies and programmes and their GIS units so that these don’t have to invest large sums in satellite imagery processing and analysis, which is a complex technical task in itself. We have been investing significant resources over time in this specific area and we are placed ideally within the UN system to reach out to UN Specialised Programmes and Agencies that can now benefit from this long term investment”.

The agreement lays the foundations for expanded cooperation including rapid mapping to support specific emergencies and in preparation for potential crises. This will include thematic mapping such as for camps, roads, infrastructure and land use and will include also dedicated training for UNHCR staff and partners.

Mr. Guterres said “UNOSAT is to be commended for the valuable contribution it makes to protecting and assisting those displaced by conflict, natural disasters and climate change”.