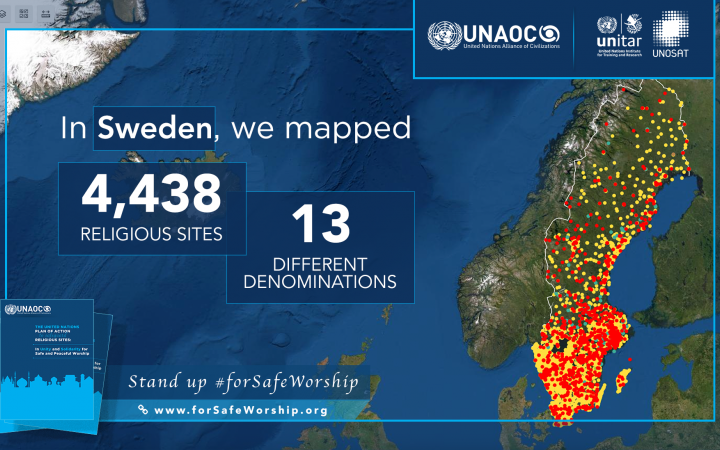 A total of 4,438 religious sites spanning 13 denominations are represented in the map, which allows users to zoom in and out of geographic locations as well as access key data points of places of worship in Sweden. Users can also toggle between faiths to see religious sites in specific denominations. Each religion is color-coded, emphasizing the mosaic of religions in the Nordic country.

Sweden is the first among a number of pilot countries in a phased approach to map places of worship in accordance with the recommendations of the United Nations Plan of Action to Safeguard Religious Sites developed by UNAOC in 2019 at the request of the UN Secretary-General in the aftermath of the attacks on mosques in Christchurch (New Zealand).

The Plan is the result of an extensive and inclusive consultative process with major stakeholders, including UN entities, governments, religious leaders and faith-based organizations. The Plan emphasizes the importance of a mutually-reinforcing collaboration between all stakeholders involved in the safeguard of religious sites.

The mapping exercise is meant to provide enhanced access to information on religious sites and contribute to raising awareness of the importance of safeguarding religious sites.