UNOSAT has been invited to present its work on Piracy Monitoring at a meeting of the UN Inter-agency Standing Committee (IASC) in October 2010. The use of satellite analysis to monitor the activity of pirates off the coasts of Somalia has been developed by UNOSAT as part of the activities of the Programme in the area of human security and monitoring. 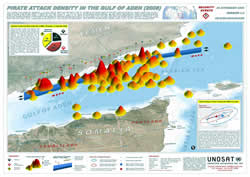 Joshua Lyons of UNOSAT explained to representatives from UN agencies and various NGOs how UNOSAT has been monitoring the activity of pirates off the coast of Somalia and in the Gulf of Aden combining open source data and dedicated satellite imagery analysis and interpretation. In illustrating some of the key findings of UNOSAT analysis, Lyons said: “the overall pirate hijacking success rate for 2009 is at 23%. This is significantly lower than the average in 2008 of 40% and is likely due to the increased naval patrols and heightened security practices of the merchant vessels in the Gulf of Aden. Despite this relative decline in the pirate success rate, there is an alarming increase in the absolute number of pirate attacks and an unprecedented expansion of pirate activity in the Indian Ocean, constituting a new phase of Somali piracy”.

The analysis has been conducted over a period of years, and it brings into light new aspects of pirates’ behavioural patterns. The output of this particular activity of UNOSAT consists of periodical updates and maps including statistical analyses as well as evidence based conclusions that in some cases challenge common perceptions concerning the security of waters off Somalia.

UNOSAT conducts studies on piracy activity and produces geospatial analysis used mainly by humanitarian users and in response to UN Security Council and IMO Resolutions on piracy. These studies are part of the activity undertaken by UNOSAT in the areas of applied research for human security.