4 December 2017, Geneva, Switzerland - Every year, on 20 November, we celebrate the most widely ratified human rights treaty in history, the Convention on the Rights of the Child, which was adopted in 1989. This year, UNICEF focused on children’s right to participate by encouraging “Kids Take Over” worldwide, a call to action “for children, by children.”

In celebration of the Universal Children’s Day, we organized a special youth dialogue between students from the Bwaila Secondary School in Lilongwe in Malawi and the Lycée International de Ferney-Voltaire, Ferney-Voltaire in France. For this particular YCD, students focused on the Sustainable Development Goals (SDGs). 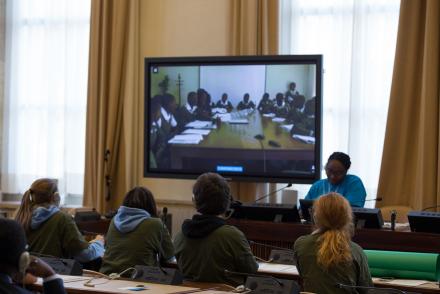 His Excellency, Mr. Robert Dufter Salama, Ambassador of the Permanent Mission of the Republic of Malawi to the UN in Geneva, delivered the opening remarks and left the participants with a question “if all the adults in the world disappeared today, what changes would you make to make the world a better place? What would your role be? Who would you involve to make these changes?” 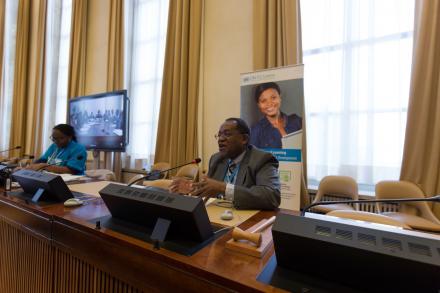 Students organized the dialogue by selecting five priority SDGs that they thought were relevant to each country. Without any prior discussions to the dialogue, students from both schools chose similar SDGs.SDGs that both schools highlighted as priorities for their respective countries during the dialogue.

SDGs that both schools highlighted as priorities for their respective countries during the dialogue.

In addition to these three, the students from Bwaila Secondary School in Lilongwe, Malawi also highlighted SDGs 1 and 4.

The students from Lyceé International de Ferney-Voltaire highlighted SDGs 5, 12 and 17.

During the final ceremony, following a lively performance by Kids United, we launched a video clip that highlighted YCDs that took place earlier between a French school and a Somali refugees school in Ethiopia.

Mr. Angus Mackay, Head of the UN CC: Learn Secretariat and Manager of the Green Development and Climate Change Programme (GCP) committed to organizing 30 more Youth Climate Dialogues by 2020 with the aim to reach more and those students living in remote areas.

Hundreds of children and young people (14-19 years old) and high-level representatives from different organizations participated with the common goal of encouraging youth to take an active role in the achievement of the SDGs.

UN CC:Learn is a partnership of more than 30 multilateral organizations supporting countries to design and implement systematic, recurrent and results-oriented climate change learning. At the global level, the partnership supports knowledge-sharing, promotes the development of common climate change learning materials, and coordinates learning interventions through a collaboration of UN agencies and other partners. At the national level, UN CC:Learn supports countries in developing and implementing national climate change learning strategies. Through its engagement at the national and global levels, UN CC:Learn contributes to the implementation of Article 6 of the UNFCCC on training, education and public awareness-raising, and the 2012-2020 Doha Work Programme.  Funding for UN CC:Learn is provided by the Swiss Government and UN partners. The Secretariat for UN CC:Learn is hosted by the UN Institute for Training and Research (UNITAR).

Photo 1: Students from the Lyceé International de Ferney-Voltaire (France) and Bwaila Secondary School (Malawi) discussing the priority SDGs for their respective countries and how youth are getting involved in achieving them.

Photo 2: Ambassador of the Permanent Mission of the Republic of Malawi to the United Nations and other international organizations in Geneva encouraging students to think about how we can all collectively make this world a better place.

Photo 3: SDGs that both schools highlighted as priorities for their respective countries during the dialogue.