Syria crisis: satellite analysis reveals how Zaatari camp has turned into a city

24 July 2014, Geneva, Switzerland - UNOSAT just released its latest analysis over the Zaatari Camp in Jordan. The camp, thought to be home to over 80,000 Syrians who have fled from the violence in their country, has been monitored by UNOSAT since its birth as part of the humanitarian rapid mapping effort deployed by the satellite programme in support of UNHCR, OCHA and other humanitarian agencies operating in Syria and in neighbouring countries hosting Syrian refugees.

The series of imagery analysis testifies of the impressive growth of the camp over time. At one point UNOSAT experts had to resort to a video to show the rapid change turning Zaatari from camp to impermanent city in less than two years. Today the camp is the third largest dwelling in Jordan and has supermarkets and even a travel agency and extends over 534 hectares. 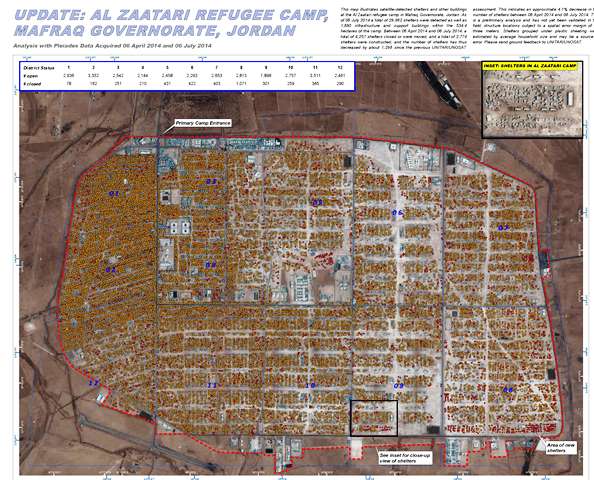 In an article published on 4 July the New York Times used UNOSAT analysis to illustrate what it called “a sudden, do-it-yourself metropolis of roughly 85,000 with the emergence of neighbourhoods, gentrification, a growing economy and, under the circumstances, something approaching normalcy”. Yet Zaatari remains above all the stigma of one of the worst humanitarian crises of our times and perhaps an indication of a whole new type of humanitarian emergency awaiting us in the future.

Surprisingly enough, the latest UNOSAT analysis reveals also that the number of shelters in the camp has decreased by 1,298 units since April 2014. This is another 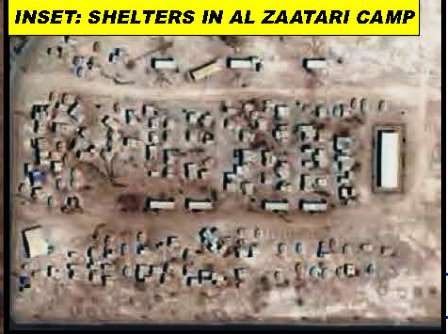 indication of how satellite analysis provides accurate information and helps keep detailed count of structures. By comparing imagery over time, UNOSAT analysts are able to indicate how many shelters have been moved, how many have been closed down and how many new ones have been set up.

According to the United Nations High Commissioner for Refugees, in 2013 there were in the world more than 50 million refugees. In practice, only World War II has caused a displacement worse than the one we are facing today.