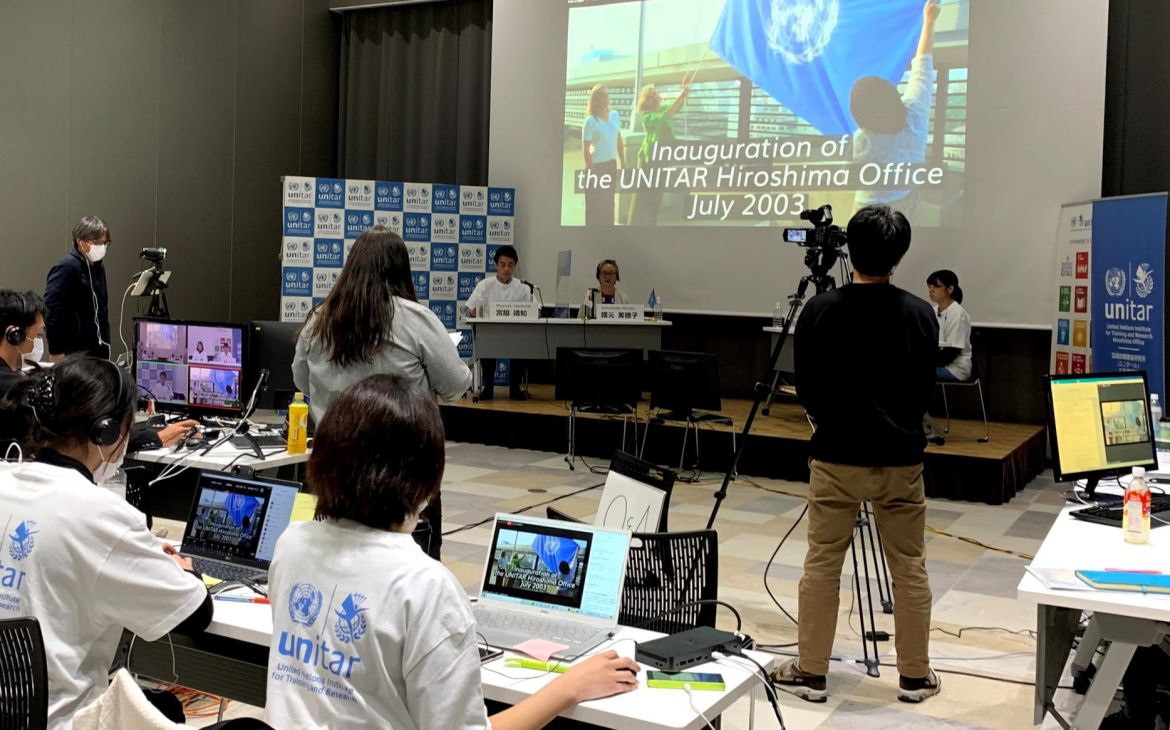 22 April 2021, Hiroshima, Japan – On 25 March 2021, UNITAR Hiroshima Office, Hiroshima Television Corporation, and UNITAR Association jointly hosted a public online forum “Shaping Our Future: Together Looking to the Future of Sports and Peace 25 Years from Now” to celebrate the 75th anniversary of the founding of the United Nations and to reaffirm the central role of the Sustainable Development Goals (SDGs) and the part sports can play in securing a peaceful future of humankind. Conducted in Japanese and English and moderated by HiroshimaTV newscaster Mr. Yasutomo Miyawaki, the live streamed event was joined by 105 viewers.

“Sports can bring people together in dialogue to overcome difficult conditions,” said Mr. Seth. As one of the architects of the 2030 Agenda for Sustainable Development, Mr. Seth advocates building into the SDGs the power of sports to achieve some of the SDG values and principles.

Sports can unite diverse groups of people regardless of their backgrounds, of gender, of race of religion. Sports can destroy all those barriers and bring people together like nothing else can.

Former sprinter Mr. Tamesue reflected how, at the Beijing Olympics, he felt a sense of solidarity with other athletes. It opened his eyes to how sports could connect people beyond nationality or background. Especially now, “at a time when social connections seem to have been lost or cut, I want to reconnect people through sports. That is what I believe I am meant to do and that’s what I’m doing now,” he said.

You may not have found that mission yet, or you may feel that you only have a seed of an idea. Go experience many things, find your role, and contribute to society. Not only is this good for society, but it’s also great for your own life because you feel that you can be of use to society and that you have a place in it.

The students’ speeches reflected their beliefs in sports as a means to achieve peace. “When you compete with an opponent, you may feel like you are fighting, but without your opponent, you cannot have a game or even practice. So, your opponent is not your enemy, but your friend,” said Ms. Matsubara.

“I think sports are weapons in fighting discrimination. People are treated equally in sport,” said Ms. Tanigawa. “Athletes are breaking the wall of discrimination with the weapon of sports. If we can break the wall through sports, we progress along the road to peace.”

Ms. Fukushima called on people to act: “Let’s make action and make the world better than now with everyone all over the world. Then, I think we can solve the problems.”

The forum concluded with words from Ms. Kumamoto. “It will continue to be important for people from diverse backgrounds to dialogue through sports and solve global problems,” said Ms. Kumamoto. “With UNITAR Association – our official supporting organization – UNITAR Hiroshima Office hopes to engage more with the people of Japan, especially from Hiroshima, by actively hosting dialogue and sports events.”