08 April 2016, New York, USA – The United Nations Institute for Training and Research (UNITAR) New York Office organized a “Skills-Building Workshop: Elections to UN Organs” on 8 April 2016. The workshop was attended by 20 delegates from Least Developed Countries (LDCs), Middle Income Countries (MICs) as well as Developed Countries with the aim to enhance the understanding of election procedures and processes at the various UN organs. The training was particularly relevant for election officers who were able to acquire new skills and tools to identify opportunities for candidatures, learn from the composition of the principal UN organs and selected subsidiary organs, as well as gain knowledge and insights from successful campaigning experiences.

Mr. Ion Botnaru, Director, General Assembly (GA) and United Nations Economic and Social Council (ECOSOC) Affairs Division, began the course by providing an overview of the elections within the General Assembly, the Security Council, ECOSOC, and the International Court of Justice (ICJ). He explained that all elections within UN intergovernmental bodies are distributed based on geographical location. These geographic regions are divided as: African States, Asia-Pacific States, Eastern European States, Group of Latin American and Caribbean Countries, and Western European and Other Group. He stated that elections within subsidiary bodies do not necessarily have to happen; if there are an equal number of candidates as number of open seats, members may be elected automatically by acclimation. Mr. Botnaru stated that this year election officials will have a particularly busy summer because the election of the Secretary General as well as the ECOSOC elections.

Mr. Stadler Trengove, Senior Legal Officer, Office of Legal Affairs (OLA), spoke about the different electoral rules that apply in the UN organs, i.e. ECOSOC, he also described the key elements of the rules and procedures for elections and voting; and about how to interpret the rules and procedures, established practice and legal interpretation pertaining to voting.

When explaining about elections within ECOSOC, Mr. Trengove explained that from its 54 members, 18 are elected each year for a three-year terms. He mentioned that among ECOSOC’s subsidiary organs, each conducts elections according to its own mandate (usually these elections are based on regional distribution though the number of seats allotted per region).  Ms. Mary Muturi, General Assembly Affairs Branch, gave an overview of the digital platform called CandiWeb, which is a website dedicated to elections and candidatures at UNHQ in New York. She explained new ways on how to access the site and all the resources that the website offers for election officers. The content of this site is maintained by the Secretariats to the GA, ECOSOC and other intergovernmental bodies.

Stefano Sensi, Human Rights Officer of the Office of the High Commissioner for Human Rights New York Office, discussed about the 9 core international human rights treaties, as well as the elections of the members of those treaty bodies. Mr. Sensi explained about the qualifications and selection criteria of candidates such as: independence, high moral standing, recognized experience in the field of human rights and/or the field covered by the treaty, among others. He highlighted the need of equal geographical representation as well as equitable gender representation. He touched on the nomination procedures, deadlines, calendar and credentials. Participants were very interested in knowing how elections were conducted and how the meetings of the states parties were organized.   An additional session was conducted by Mr. David Biggs, Senior Political Affairs Officer, regarding the Security Council and the subsidiary organs. He mentioned the machinery of the Security Council and their committees, the chairs of the committee and the rotation process. Mr. Bigss highlighted the need for Permanent Missions participating in the Security Council to decide on which committees their countries would be interested in chairing in order to start campaigning with this aim. 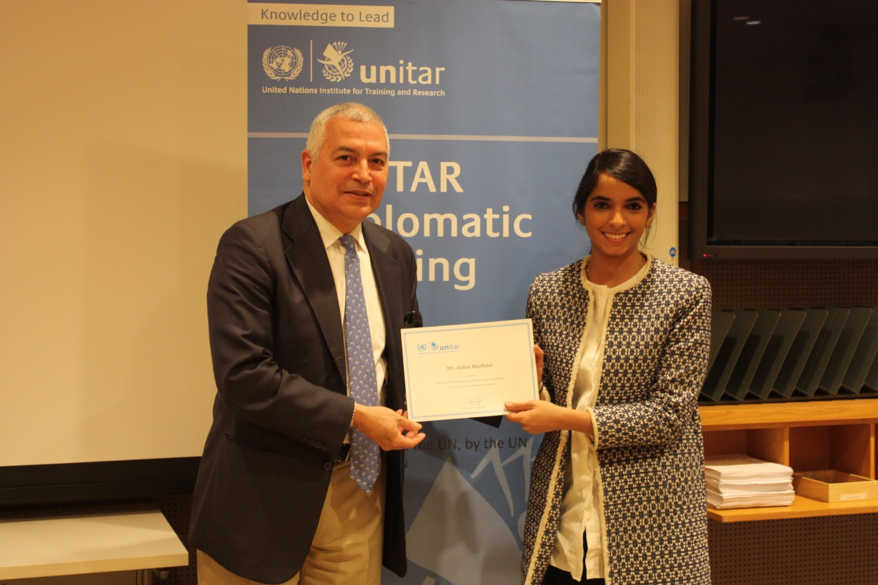 In the last session of the seminar, Ms. Melissa Jodeanne Johnson representative from the Permanent Mission of Jamaica and Ms. Maria Jose Aguila del Castillo from the Permanent Mission of Guatemala shared their experiences on campaigning at the UN. Both delegates spoke about the steps they successfully undertook when organizing a campaign, they described the essential pointsany election officer needs to consider in order to campaign and be successful for any particular elections from a small state perspectives.

At the end of the day, participants received a certificate of participation.

Photos: Participants and facilitators of the seminar