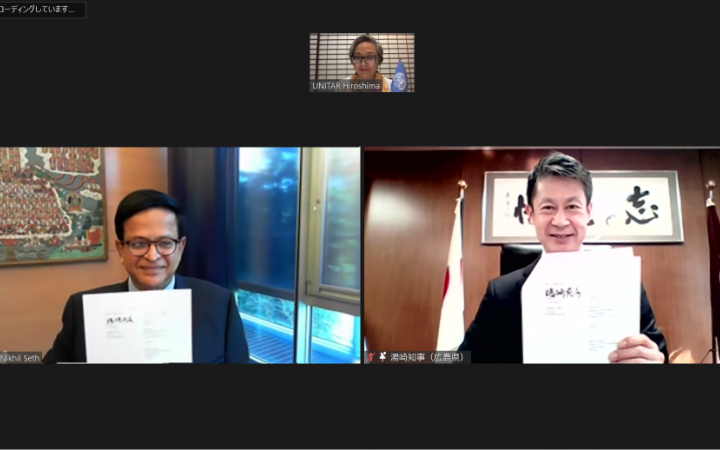 26 March, 2021, Hiroshima, Japan – UNITAR is delighted to announce the signing of the 7th Special Purpose Grant Agreement (SPG) with the Hiroshima Prefectural Government for FY 2021 to 2023.

Since the establishment of UNITAR Hiroshima Office in 2003, the Hiroshima Prefectural Government has continuously supported our implementation of trainings.

“I am much pleased to finalize the seventh renewal of the SPG agreement and look forward to UNITAR’s continue operations in Hiroshima,” said Mr. Hidehiko Yuzaki, Governor of Hiroshima Prefecture, at an online signing ceremony of this agreement on 24 March, 2021. Governor Yuzaki also expressed his gratitude for UNITAR’s cooperation on the Hiroshima Initiative, a newly established framework working for a world free from nuclear weapons, and its promoting organization, HOPe, or Hiroshima Organization for Global Peace.

“We are grateful and honoured to have our base in Hiroshima – a city that reminds people of both the darkness and brightness of humankind. Hiroshima symbolizes the best of humanity – resilience, determination, courage, forgiveness, and rebirth,” said Mr. Nikhil Seth, UNITAR’s Executive Director. “We are proud of and honoured by our long-standing partnership with the Hiroshima Prefectural Government. We look forward to further enhancing this partnership as Hiroshima flourishes as a world centre of peace and UNITAR as a training arm of the United Nations.”

Since 2003, 50,000 women and man from around the world have taken advantage of learning offered by UNITAR Hiroshima Office. These people would not have been able to benefit from these learning services without the contribution of the Hiroshima Prefectural Government.