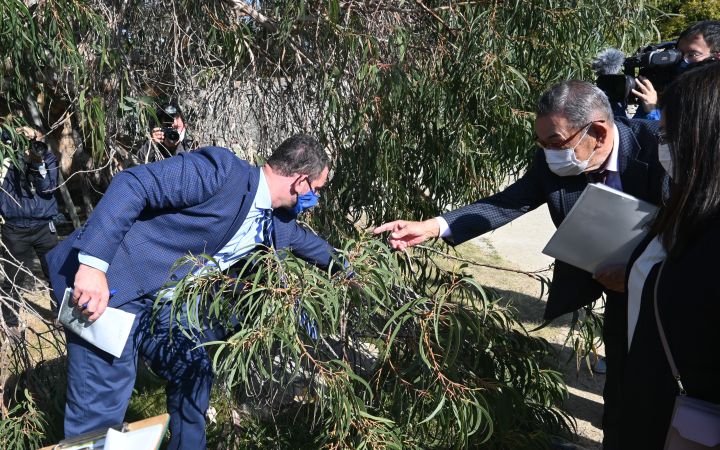 Ari Novy, who led the delegation, first heard of GLH’s efforts through a campaign to establish botanical gardens in Afghanistan (*1), led by GLH co-founder and coordinator Nassrine Azimi. Ari was deeply moved when he saw a sapling of a tree that had survived the atomic bombing (*2) and was growing in the Japanese Friendship Garden in San Diego. “This hope-bringing magical power is needed all over the world,” Ari says.

During the Hiroshima visit, the scientists and experts visited various hibakujumoku, including those around Hiroshima Castle and Shukkeien garden. This was also an opportunity for the scientists to discuss the trees with Chikara Horiguchi, the tree doctor who has cared for the hibakujumoku for more than 30 years.

The delegation paid courtesy visits to Hiroshima Mayor Kazumi Matsui and Hiroshima Prefecture Vice Governor Yuko Tamai to advance the importance of the hibakujumoku as well as of botanical gardens.

Bonds between Hiroshima botanists and the US experts were forged when the scientists visited the Hiroshima Botanical Garden and met current and past directors and staff partnering with GLH. The group also partook in seed picking, a tradition that allows GLH to preserve and grow second-generation hibakujumoku around the world.

The Green Legacy Hiroshima Initiative sends the seeds of trees that survived the Hiroshima atomic bombing to partners around the world to spread Hiroshima’s universal message for peace. The Initiative was co-founded in 2011 by UNITAR Special Senior Advisor Nassrine Azimi and ANT-Hiroshima Executive Director Tomoko Watanabe. The GLH Committee, which supports the campaign, includes tree doctor Chikara Horiguchi and other prominent individuals in Hiroshima and around the world. GLH is part of the Hiroshima A-bombed Trees Working Group along with Mayors for Peace, Hiroshima City, Hiroshima Botanical Garden, Hiroshima University and Hiroshima Prefecture. Worldwide, it has partners in 40 countries, raising second-generation hibakujumoku.

One of the eight divisions of UNITAR, the Division for Prosperity is based in Hiroshima and Geneva and seeks to shape an inclusive, sustainable and prosperous world. The Division offers world-class learning and knowledge-sharing services on entrepreneurship, leadership, finance and trade, digital technologies, and nuclear disarmament and non-proliferation. We empower individuals from developing countries – especially women and young people – to address inequalities. Our alumni are making a difference in the least developed countries, countries emerging from conflict, and small-island developing states.