Lecture on Climate Change for Sustainable and Green Development

Lecture on Climate Change for Sustainable and Green Development 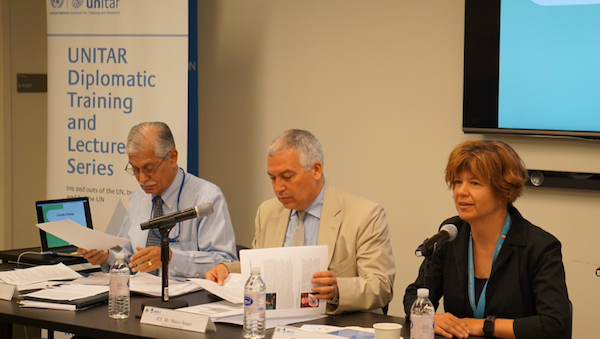 19 April 2016, New York, USA - The United Nations Institute for Training and Research's (UNITAR) New York Office partnered with the Permanent Mission of Italy to the United Nations for a seminar on “Climate Change for Sustainable and Green Development” on 19 April 2016. The workshop was attended by approximately 20 delegates from the Least Developed Countries (LDCs) and the Small Island Development States (SIDS). Following the opening remarks by Mr. Marco A. Suazo, Senior Advisor and Acting Head of UNITAR New York Office, Ms. Valeria Biagiotti, First Counselor of the Permanent Mission of Italy to the United Nations (UN), stated the timeliness of the workshop as the signing of the Paris Agreement at the United Nations Headquarters would occur just three-days later on Friday, 22 April 2016. Ms. Biagiotti highlighted the importance of the topic of climate change in today’s global agenda and how climate interlinks with other UN-wide global issues, including sustainable development, disaster risk reduction, and conflict prevention, among others. 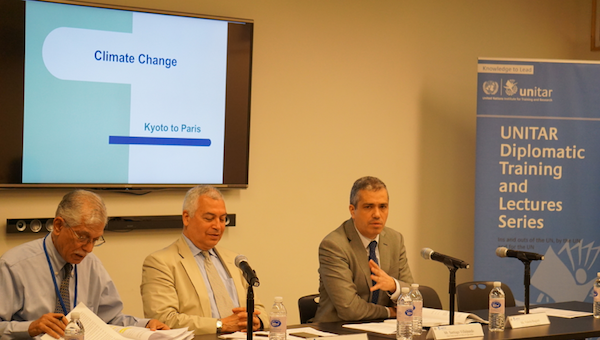 Professor Narinder Kakar, Former Permanent Observer of the International Union for Conservation of Nature (IUCN) to the UN, and co-Director of UN Environmental Diplomacy Programme and Adjunct Professor of Pace University School of Law, provided the overall picture of climate change issues beginning with the Kyoto Protocol in 1997 to the Paris Agreement in 2015. He then focused on the legislative history of the Kyoto Protocol including the Intergovernmental Panel on Climate Change (IPCC) and UN Framework Convention on Climate Change (UNFCCC). He spoke on the background, timeline, and characteristics of the recent adoption of the Paris Agreement (2015). During the lecture, Professor Kakar also addressed key issues of the Paris Agreement, including the non-state actors’ role, Common but Differentiated Responsibilities (CBDR), the review process, and the future roadmap.

During the Q&A several key issues were discussed: the relevance of disaster reduction, the finance mechanism, the participation of young generations, the enforcement mechanism, the role of the world’s largest emitters, the effect of climate change on Small Island Developing States (SIDS), the democratic negotiation process, as well as the relationship between climate change and the 2030 Agenda Sustainable Development Goals (SDGs). Participants also showed interest in the legally binding agreement created in Paris and sought to understand how developed countries will finance the adaptation and mitigation mechanism of developing countries. 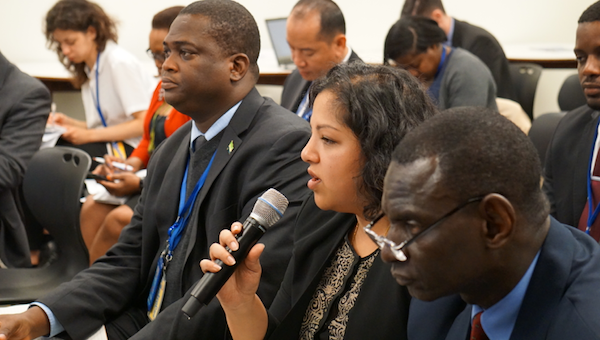 In the second session of the lecture, Mr. Santiago Villalpando, Chief of the Treaty Section in the Office of Legal Affairs (OLA) of the UN, explained the complexity of the negotiation process of the Paris Agreement as well as the legal characteristics of the treaty and its pending entry into force. Mr. Villalpando briefly stated the differences between the Kyoto Protocol and the Paris Agreement, including the double thresholds requirement of the latter Agreement. He also described the role of the Treaty Section for the signature and depositary of the Paris Agreement, particularly for the high-level signature ceremony that is taking place on Friday 22 April 2016 in New York. He stated that approximately 40 Heads of States and 100 Foreign Ministers from different countries are expected to arrive to New York for the signing of the Paris Agreement. Mr. Villalpando pointed out that the signing does not make the climate change treaty legally binding on a state until the state ratifies, accepts, or approves the treaty.

Participants were very enthusiastic about this presentation and addressed several questions to the panelist regarding the length of the agreement and the relationship between the Kyoto and Paris Agreements. In particular, SIDS representatives were very interested in knowing what states hope the climate change agreement will accomplish, how the agreement’s success will be measured, as well as the double threshold requirement.

Finally, Mr. Suazo concluded the seminar by summarizing the presentations and discussions. Due to the long and ongoing process of the climate change issue, UNITAR will offer other courses on climate change in the near future.

Photos: Participants and facilitators of the seminar