9 February 2022, Geneva, Switzerland - A category 5 Tropical Cyclone struck the Philippines in December 2021, causing significant damage and affecting a large part of the population. Following a request from the Regional Office for Asia and the Pacific (in Bangkok), of the United Nations Office for the Coordination of Humanitarian Affairs (OCHA), UNOSAT’s Emergency Mapping service was activated to support the planning and coordination of emergency response operations with satellite imagery analysis. 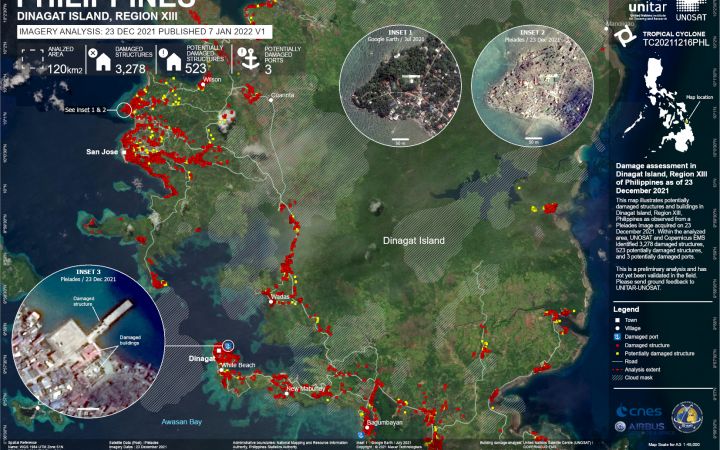 On the 16th of December 2021, Tropical Cyclone RAI-21 made landfall north of General Luna city on Siargao Island, the easternmost island of the Philippines. It continued westward through the central part of the country within the next 24 hours.

As soon as UNOSAT received the support request from OCHA, satellite imagery experts started gathering the relevant data to promptly proceed with the analysis. UNOSAT also triggered the International Charter: Space and Major Disasters to task and receive all available satellite images on the areas of interest. The next day, the first preliminary satellite-derived products were disseminated to the relevant actors and made available online, including on the dedicated webmap.

This initial analyses showed high levels of standing waters and large inundated areas on parts of the islands first affected. The following assessments showed clear evidence of large damage to houses, schools, roads, ports and bridges, disrupting aid movement into the affected areas. In the next two weeks, UNOSAT identified about 23,930 structures as damaged and potentially damaged within the analyzed areas, from the analysis of very high-resolution satellite images. According to the Philippines National Disaster Risk Reduction and Management Council (NDRRMC), 2,182,791 families have been affected and about 30% of the population was in need of emergency humanitarian assistance.

“This is one of the worst cases scenarios, based on my observation experiences from the satellite images in several situations in the past. A ton of debris from the houses structures were observed in a wide area, particularly along the cyclone track. Several fisherman villages had completely disappeared from the newly acquired satellite images after the cyclone had passed." Jakrapong Tawala, Geospatial Analyst, UNOSAT

For the assessment, a photo-interpretation comparative method was used, which was challenged by the presence of clouds on some of the satellite images available after the event, making the identification of buildings and infrastructure impossible. Another challenge was the nature of the urban setting in the main cities of the Philippines: the presence of informal settlements, the high building density and the incomplete footprint data, made the assessment more complex and longer.

“We contacted the Emergency Mapping service right after the report of the first landfall with anticipation of damages in the affected areas. The UNOSAT team was very responsive and keen to accommodate our requests to include additional analysis areas. They kept us well informed of the process, progress and analysis results.” Punya Prasad Sapkota, Regional Information Management Officer, United Nations Office for the Coordination of Humanitarian Affairs (OCHA), Regional Office for Asia and the Pacific

The preliminary and detailed analysis results were shared as they became ready, which helped the OCHA officers to better understand the scale of damages in the different areas of interest, and evaluate the impact of the cyclone and prepare for humanitarian response. The evidence provided by the satellite-derived analyses was even more valuable in the first days after the event as there were challenges getting information from the affected areas due to power and communication interruptions. The analysis results were also shared by OCHA with the government and partners.