Tremendous growth in beneficiaries in 2018

UNITAR achieved tremendous growth in beneficiaries in 2018, with a total outreach of 84,901 beneficiaries (49 per cent increase over 2017). The Peacekeeping Training Programme, the Green Development and Climate Change Programme, and the Global Network of International Training Centres for Authorities and Leaders (CIFAL) account for 90 per cent of UNITAR’s overall beneficiaries. These beneficiary outputs were produced through the delivery of 638 events, equivalent to 6,010 training days over the calendar year.

As a subset of beneficiaries, the number of learners has also increased in 2018, with 60,901 individuals (or a 60 per cent increase) taking part in 473 events having specific learning outcomes. While this growth is remarkable, UNITAR recorded only a marginal increase of some 1,000 learners coming from the countries in special situations (including the least developed countries, the landlocked developing countries and the small island developing States). In proportional terms, beneficiaries from this grouping of countries declined sharply, from 52 per cent of all learners in 2017 to 32 per cent in 2018. This is the result of the large increase in the number of beneficiaries enrolled in climate change and CIFAL learning-related events from developed and advanced developing countries. While UNITAR has also trained proportionally fewer government officers than in 2017 (and relatively more participants from academia), the male to female ratio of 56 to 43 (in addition to 1 per cent recorded as other) is similar to 2017, without counting beneficiaries from peacekeeping training. Management will be assessing these trends closely with a view to ensuring that UNITAR’s programming can make its footprint as big as possible to helping reach the furthest behind first in the spirit of the 2030 Agenda. 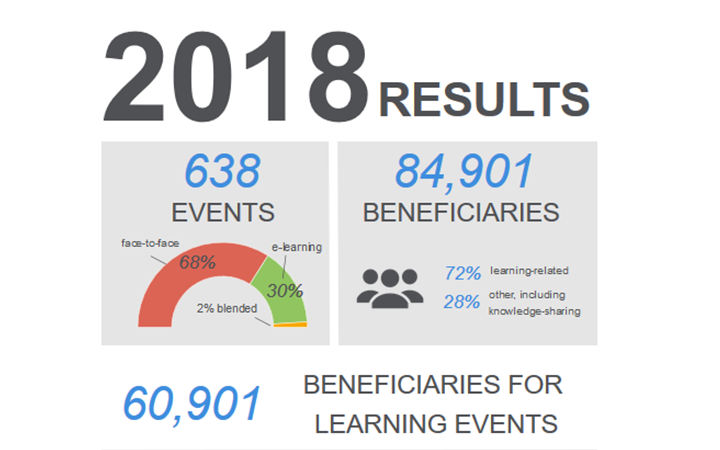 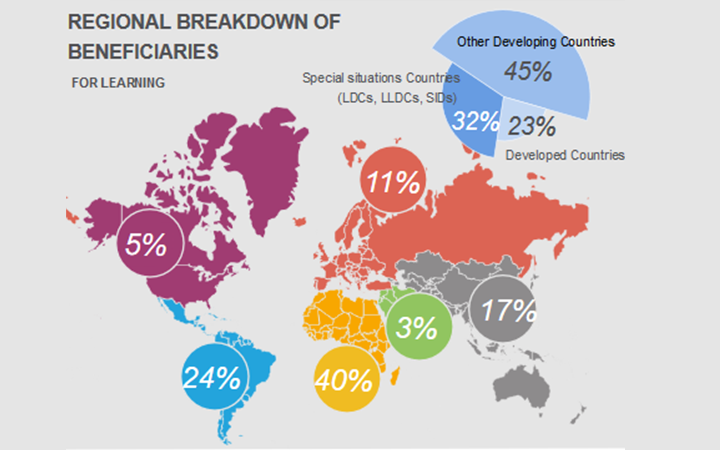 Impact stories: Evidence on change beyond the training room

The Impact Story Initiative continues to uncover evidence of important changes taking place in the lives of UNITAR’s beneficiaries as a follow-up to training. These stories use the most significant change technique which is based on a qualitative, participatory approach and looks for stories of significant changes. By analyzing the impact that one event has had in the medium-term for a few beneficiaries, these impact stories highlight the experiences of participants months after they have completed the course or training. The personal stories are supported by a larger sample of survey data. Impact Stories are a way of going beyond the numbers and beyond the self-assessments taken at the end of courses, to hear the stories and real experiences of those who have taken part. They are not success stories as they try to get a full picture — the positives and the negatives of the learning events. Since the inception of the impact stories programme in 2018, the Planning, Performance Monitoring and Evaluation (PPME) unit has published six stories, with more in production. Recently published stories include: Geospatial Information Technology for Evidence Based Decision Making and Trade, Food Security and Nutrition FAO and UNITAR E:Learning Course