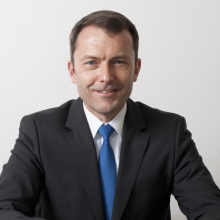 Before joining the Federal Department of Foreign Affairs in 1993 he worked in peacekeeping missions in Namibia (UNTAG) and Korea (Panmunjom). Between 2007 and 2009 he served as chef de cabinet to the president of the International Criminal Court in The Hague, Netherlands. Between 2011 and 2015 he served as head of the United Nations and International Organizations Division in Bern. Jürg Lauber has a law degree from the University of Zurich.