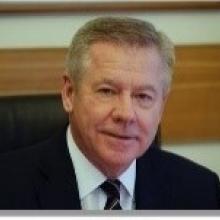 Ambassador Gennady Gatilov is Permanent Representative of the Russian Federation to the United Nations Office and Other International Organizations in Geneva, and Permanent Representative of the Russian Federation to the Conference on Disarmament. Prior to this appointment in January 2018, Ambassador Gatilov was Deputy Minister of Foreign Affairs from 2011, and earlier, Director of the Department of International Organizations (2008-2011) and Senior Advisor with the Executive Office of the Secretary-General (2004-2008). During the span of his distinguished career, Ambassador Gatilov has had various other senior positions and diplomatic postings. He was awarded the Order of Honour and the Order of Friendship. He is a graduate of the Moscow State Institute of International Relations. He is married with a daughter.