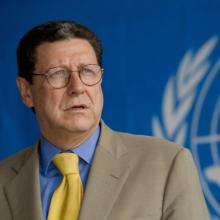 Mr. Alan Doss is Senior Political Advisor at the Kofi Annan Foundation. He is Former Special Representative of the UN Secretary-General to the Democratic Republic of the Congo. He spent his entire professional life in the service of the United Nations working on peacekeeping, development and humanitarian assignments in Africa, Asia and Europe as well as at United Nations Headquarters in New York.

Mr Doss had previously served as United Nations Resident Coordinator and Regional Representative of the UNDP in Bangkok, Thailand and Director of the United Nations Border Relief Operation (UNBRO), in charge of United Nations assistance to hundreds of thousands of displaced Cambodians on the Thai-Cambodia border before their repatriation to Cambodia.

Mr Doss has written numerous articles on development, peace keeping and peace building. He delivered the 2009 Nelson Mandela Lecture on Africa at the Royal United Services Institute in London and the 2010 Count Folke Bernadotte Memorial Lecture on Protection and Peacekeeping at the United Nations Association of the United Kingdom. He has been a guest speaker and lecturer at the Woodrow Wilson Centre in Washington D.C, the International Peace Institute in New York.