A breakthrough initiative by the One UN Climate Change Learning Partnership is bringing students together via video link to talk about climate change, informing the climate debate and adding new perspectives to climate change education across the globe. 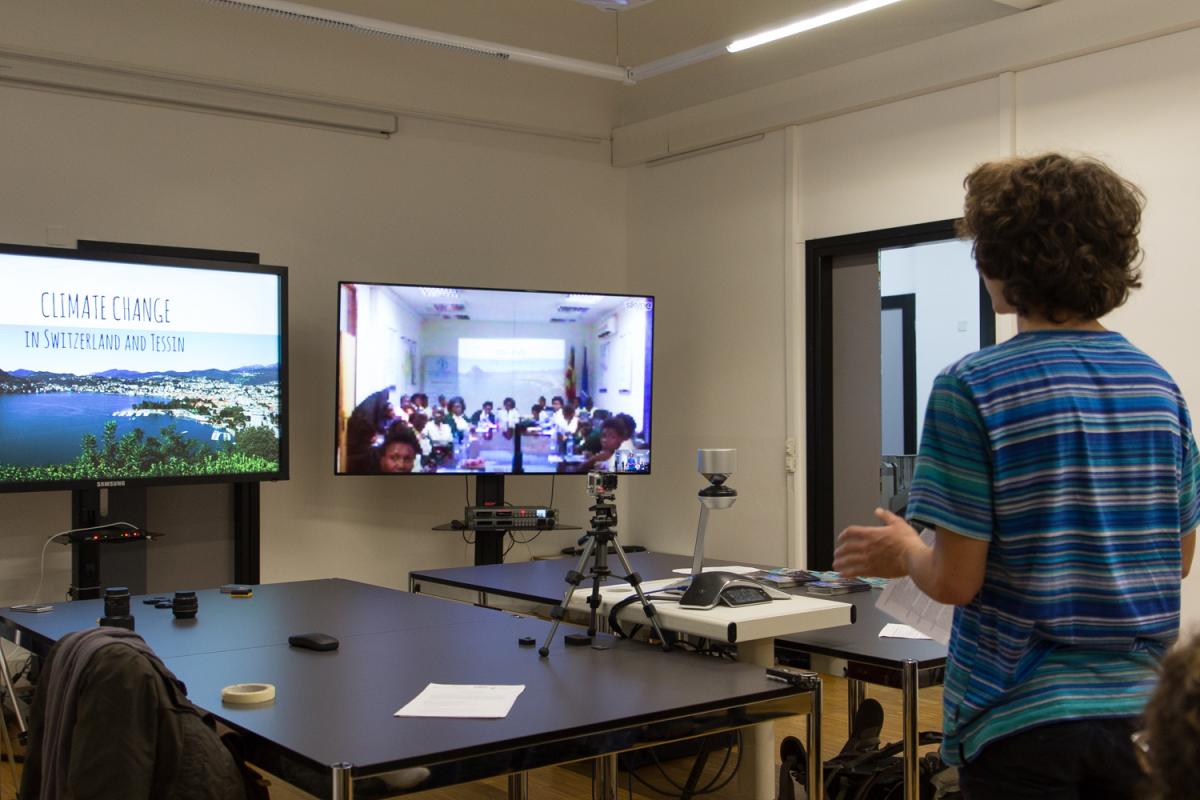 “What will the future be like when the glaciers have melted because of climate change?”
This is a question put to a class of Swiss teenagers via video link by 16-year old Joyce Jelasi from Malawi.  It conjures up images of a potential apocalypse, and is a prospect that many of us may never have contemplated before.  But as global warming casts its shadow over future generations, this is perhaps something that we should all be talking about.

“Maybe we will have less tourists here”, answers Swiss student, Noah Tongmool, “But the big problem will come in about 100 years because Switzerland is highly dependent on the glaciers, and we might not have enough water,” he tells Joyce’s class at Lilongwe Girls’ Secondary School in Malawi.

For most countries in Europe, climate change education is not included in the national curriculum but for the past few weeks, these Swiss students from Kantonsschule am Burggraben Secondary School in St Gallen in the North of Switzerland have been preparing for a special live discussion with Joyce’s class in Malawi as part of their geography lesson.

Far from being a regular Skype conversation, these students are taking part in a Youth Climate Dialogue, a unique educational initiative launched in 2015 in the run up to the Conference of the Parties, COP 21, by the UN climate change learning partnership, UN CC:Learn, with the support of the Swiss Agency for Development and Cooperation.  The dialogues aim to provide youth with a much-needed platform to discuss climate change with their peers in other countries and to voice their ideas.  In addition, those taking part can access a free online course especially designed by the United Nations’ research and training institute, UNITAR, to cover the basics of a range of topics, including climate science, adaptation and mitigation, international legal and policy frameworks, and climate change finance and planning.

As the video conference between Malawi and Switzerland gets underway, the pupils explain how climate change is affecting them.  While the Swiss speak of a delayed skiing season and a lack of snow, their Malawian counterparts share more personal experiences that have impacted both their welfare and their emotional well being.  Increasingly erratic weather conditions are having daily repercussions on their lives, and the stories from Malawi highlight issues of food insecurity and interrupted learning.  As 17-year-old Annie Tamandani recounts the episode that saw her grandmother washed away by heavy flooding the year before, an emotional moment grips the classes on both sides of the screen…

Just 3 days before the Switzerland-Malawi youth climate dialogue, Malawi’s President, Peter Mutharika, had appealed to the international community to increase humanitarian assistance for the country’s looming hunger crisis, following repeated episodes of flooding and drought which has resulted in low yields of the nation’s main staple, maize.  But the Lilongwe teenagers make it clear to the Swiss pupils that they are not passive victims of climate change.  Defying traditional development donor-recipient positions, they show that they are ready to take the battle into their own hands. “The government has to play a role by supporting those affected!” says 16-year-old Cecilia Tembo decisively, as she shares her ideas for adaptation and mitigation solutions.

Summing up the discussion, pupil Marc Blöchlinger says, “Here in Switzerland we don’t see climate change as much as you do.  In Malawi it’s apparently much worse, so this conversation has really opened our eyes to what is happening.” 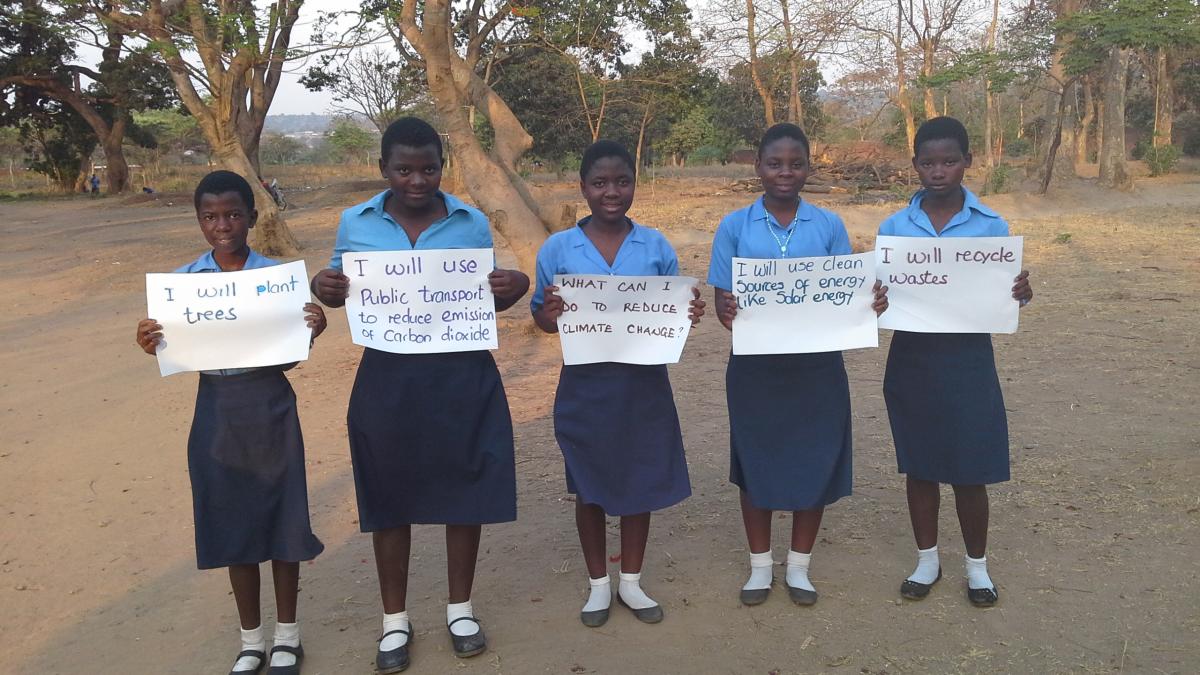 Focal Point for the Climate Change & Environment Network at the Swiss Agency for Development and Cooperation, Daniel Maselli, highlights the contrasting perceptions of climate change on either side of the screen. “Here in Europe, the reality of climate change, the way in which it could or will impact in future, has not yet reached our society,” he explains. “In Switzerland, climate change isn’t a broad societal topic and there is no national climate change learning strategy.”

“We need to find different ways of talking to each other about climate change, rather than leaving this to formal education, and the best way to do this is to start young.”

So far, some 300 teenagers from schools in France, Uganda, Malawi, Switzerland, Niger, Costa Rica, Panama, Guatemala and Dominican Republic have taken part in Youth Climate Dialogues, sensitising them to the topic and activating the powerful role that they have to play in sharing vital information. But for every youth who has taken part in a climate dialogue, there are many millions more who are facing the impacts of global warming whose voices are not being heard.

In the decades to come, the United Nations Children's Fund, UNICEF, projects that climate change will affect approximately 200 million children as the average global temperature continues to rise, most of these situated in vulnerable lower income countries.  While these figures point to an urgent need to strengthen youth’s capacities to adapt, climate change education around the world remains patchy, and there is a critical need for programmes that increase young people’s knowledge of global warming and give them a voice. Various issues including policy decisions, a lack of teacher training, overburdened teachers and curricula, and political opposition have dampened the mainstreaming of climate change education, with some schools simply integrating aspects of this into science or geography lessons, or into extra curricula clubs.

Angus Mackay, Manager of the Climate Change Programme at UNITAR, says it’s vital that youth should be able to communicate with each other about climate change. “These children want to be engaged, but in most countries, even though most of them are aware of climate change, they don’t connect it to their daily lives,” he explains. “We need to find different ways of talking to each other about climate change, rather than leaving this to formal education, and the best way to do this is to start young.” 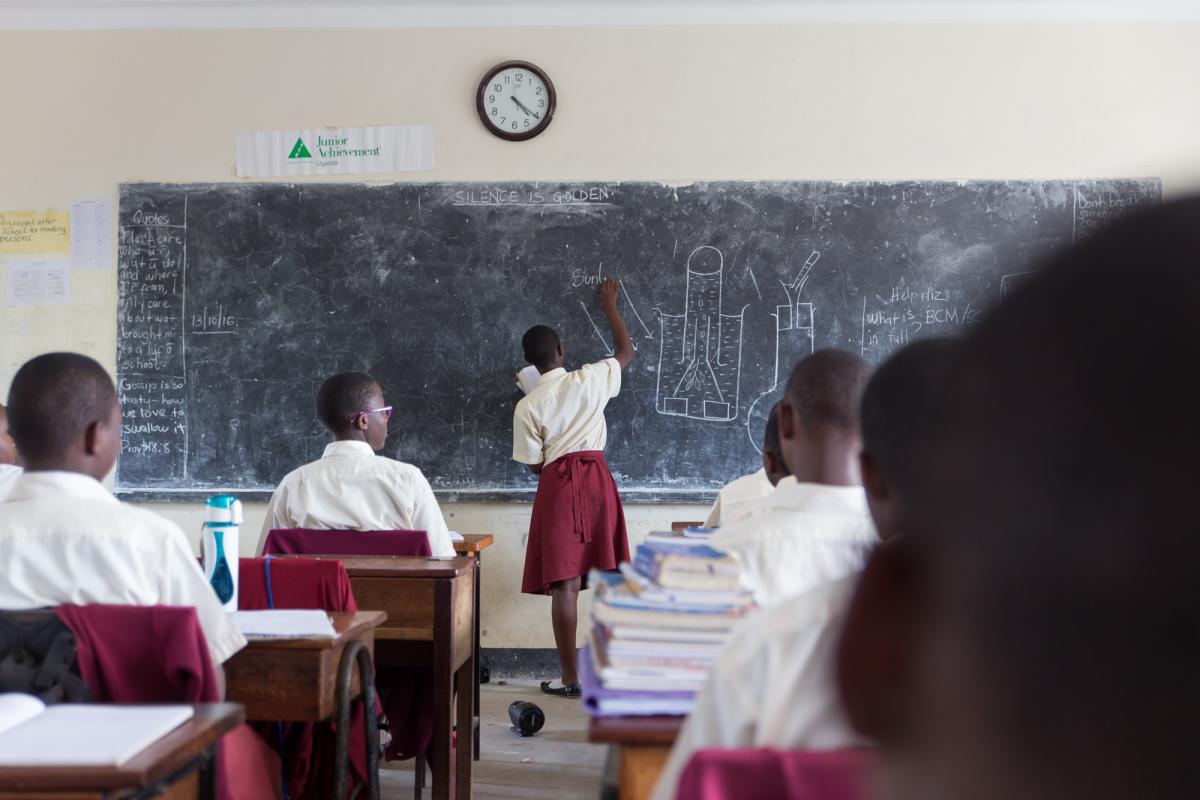 Beyond the facts and figures of the science of global warming, this is about finding narratives and characters that appeal to young audiences to help them join the dots between their everyday lives and the big wide world. And this is where the Youth Climate Dialogues are succeeding. In coming together to exchange information and ideas over different continents, these conversations are pushing a positive discourse in climate change that is opening new windows of opportunity to today’s youth.

“Beyond ecosystems, temperature degrees or local scenarios,” says Ilaria Gallo, Climate Change Specialist at UNITAR, “climate change is about discussing new opportunities and realising how we can share resources at the global level. By sharing their opinions and ideas with each other, the students are bringing these important narratives to the fore.”

Indeed, the magic of the youth dialogues is that the information comes from a peer in another country - not a teacher or a politician - but a trustworthy messenger.  Pupils at Lycée International de Ferney-Voltaire in France were taken aback by their youth dialogue with Trinity College Nabbingo in Uganda.  Prossy Muteteri, 16, explained how a steady decline in rainfall and a rise in average temperatures in Uganda over the past 20 years has resulted in conditions that she describes as ‘only negative’.  “We have higher temperatures”, she says, “the quality of food we eat is falling, there are fewer fresh fruits on market, and the high temperatures don’t let us sleep!”  Teacher, Alan Ackroyd, a Director of the Model United Nations club at the Lycée International de Ferney-Voltaire, says his students were moved by the discussion. “The detail that the Ugandan girls provided was so precise that it really brought home the fact that climate change is part of their everyday lives.”

“Beyond the facts and figures of the science of global warming, this is about finding narratives and characters that appeal to young audiences to help them join the dots between their everyday lives and the big wide world.”

The dialogues have shown that students on both sides of the screen are eager to talk about climate change and share their ideas and solutions. “Climate change is affecting everyone in the world”, says Lilian Nakitende from Trinity College Nabbingo in Uganda, “And with the Youth Climate Dialogues we are able to share ideas on how to prepare to cope with its effects, and lay strategies to mitigate it for a better tomorrow as the new generation.” Lilian’s Classmate, 16-year old Regina Nalunga says is she were the government, she would prioritize agriculture and set strict laws against the depletion of wetlands and deforestation, “I would also encourage tree planting campaigns”, she says, “and promote the use of alternative energy sources like solar energy, briquettes and biogas to save forests.”

French student, Diane Jacquet says she was inspired by the enthusiasm and ideas of the pupils in Uganda. “We learnt that they were planting trees and they suggested that we could also plant a tree on everyone's birthday… If I was in the government, I would make everyone plant a tree for their birthday,” she says eagerly.

As well as providing a space for discussion, the dialogues are proving to be a key instrument in contributing to the knowledge of local communities. UN Food and Agriculture Organization’s, Emmanuel Zziwa in Uganda, explains how young people are helping to spread vital information. “People here are stuck in a vicious cycle,” he says, “they are seeing the effects of climate change, but they are unaware of its causes, and continue to contribute to carbon emissions in their everyday activities...These pupils are all message carriers - they go home and tell their friends and family what they’ve learnt at school.”

And as the Millennial generation who are born digital become increasingly engaged via an array of diverse online platforms, there is enormous potential both for learning about climate change and for the promotion of climate resilient communities.   The Youth Climate Dialogues are captivating those involved and are showing that youth are keen to discuss climate change and ready to make a difference for a better world, taking on the challenge with open arms.  Manuela Varini, biology teacher at Liceo Cantonale di Lugano 1 in Switzerland, who helped to organise a dialogue with pupils at Gayaza High School in Uganda, affirms this point. “Children are extremely receptive by nature”, she explains, “They realise how big this problem is, and the fact that they are so sensitive means that this issue will stay with them for the rest of their lives.” 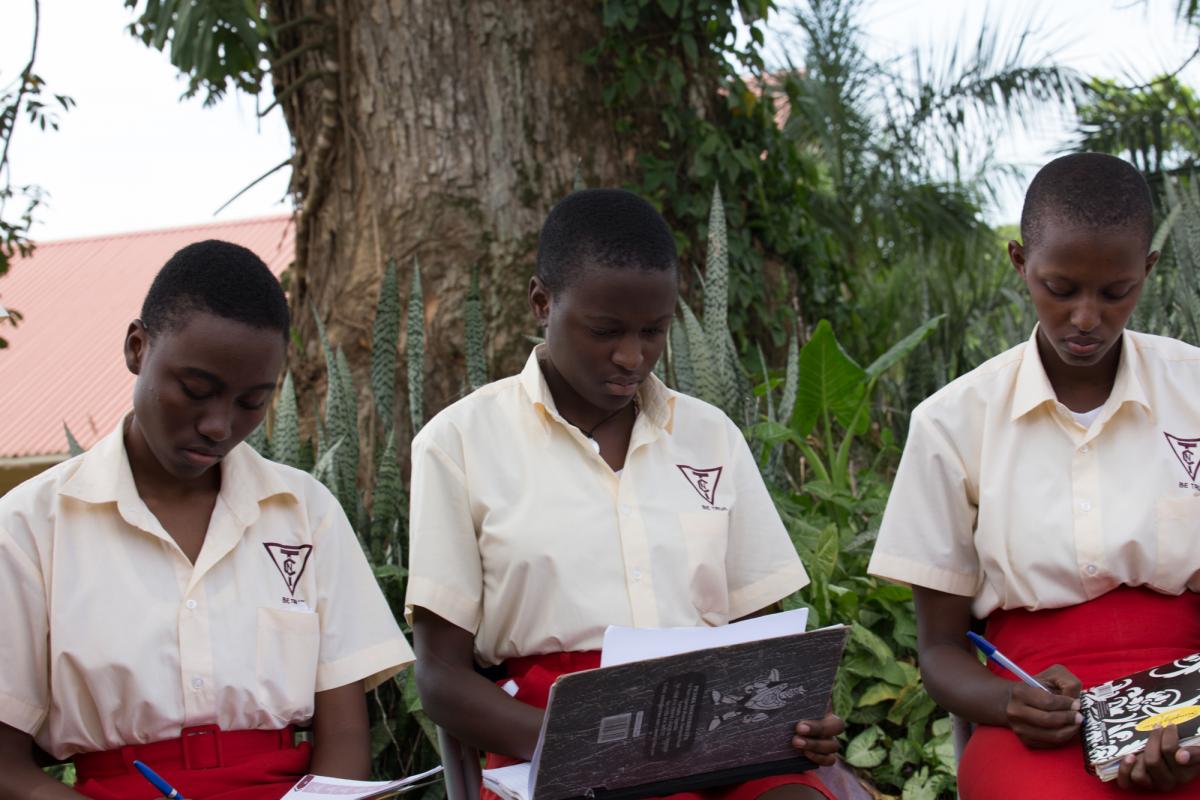 So what’s next for the Youth Climate Dialogues?  This spring, the dialogues will be extended to include two new target groups: children of primary school age, and teenage refugees. The dialogues will be organised with Ethiopian institutions as part of a national action plan for climate change education that is currently being developed by the government in cooperation with UNCC:Learn, and will involve one of Ethiopia’s 24 refugee camps, Sheder, which is situated in the east, close to the border with Somalia.

Forming a strong partnership between young and old will be essential for the transition to a low-carbon society, but for many of today’s youth climate change is still a distant concern.  Angus Mackay,  accentuates the lifelong learning potential of the Youth Climate Dialogues. “When you look back at your school days, there are always a few episodes or events that have influenced you and that stay in your memory. That's what we want from these exchanges. Children will be better prepared for the effects of climate change because they will be naturally predisposed to it.”

One thing is clear - we need to keep talking…  Let's not leave youth out of the conversation.