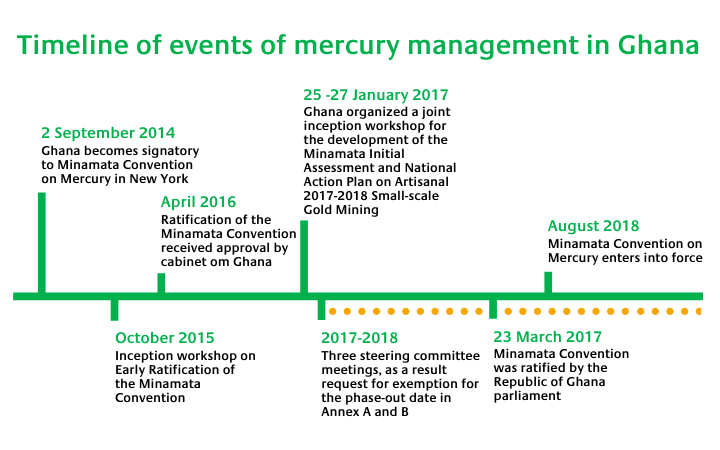 Mercury is a silvery-white metal that is liquid at room temperature and evaporates easily into the air. Many Artisanal Small-Scale Gold Miners (ASGM) around the world use mercury to extract the gold from the earth using its low heating point to evaporate from the gold compile.

Mercury exposure causes severe negative effects to both human health and the environment. ASGM continues to be a major issue of concern globally due to the activities and disposal of products that are contaminated with mercury.

While the world will never be entirely “mercury free” simply because it is an element which occurs naturally, we can strive to continuously minimize and eliminate where feasible all anthropogenic emissions and releases of mercury (1).

In Ghana, UNITAR has jointly implemented programmes and initiatives with the Ghana Environmental Protection Agency (EPA) and other partners such as the Swiss Confederation, the Global Environment Fund and the United Nations Development Programme (UNDP) since 2015 to provide a national framework for the implementation of the Minamata Convention on Mercury. For example, UNITAR provided Ghana’s EPA with technical support to facilitate the ratification of the Minamata Convention. This programme was financially supported by the Swiss government. Furthermore, UNITAR has supported the EPA with the development of the Minamata Initial Assessment (MIA) Ghana in partnership with UNDP. The MIA is an essential enabling activity that has facilitated the EPA to scope the magnitude of the national mercury challenge, priorities and develop appropriate intervention plans. This project is funded by the Global Environment Fund.

Under this project, the EPA, UNDP and UNITAR jointly organized an inception for the MIA project in collaboration with the United Nationals Industrial Development Organization’s (UNIDO) National Action Plan for the Artisanal Small-Scale Gold Mining (ASGM) workshop from January 25th to January 27th, 2017.

During this workshop, a joint steering committee for both the MIA and ASGM was selected, and the roles and responsibilities of members were proposed and agreed on. One main objective of the workshop was to raise awareness of policy makers and the general public on the threats of mercury, its environmental and health concerns and the need for national action.

Raise awareness of policy makers and the general public on the mercury menace, its environmental and health concerns and the need for national action; 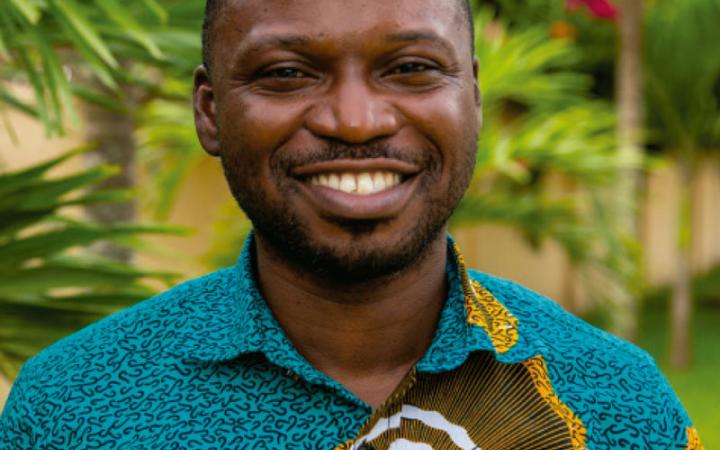 Solomon works for the social and environmental advocacy NGO Friends of the Nation in Ghana and has actively partook in both workshops organized by UNITAR starting off with the Early Ratification of the Minamata Convention in October 2015 and the joint inception workshop for the MIA and NAP on ASGM Projects in January 2017. He was also chosen to partake in the small working group to contribute to the Minamata Initial Assessment.

One of the MIA workshop’s main objectives was to raise awareness on mercury menace for policy makers and the general public. Solomon “strongly agreed that [the workshops] contribute to raising public awareness as well as [for] policy makers on the impact of mercury on human health and the environment and the need to Ghana to take action to mitigate this problem.” Regarding the most significant change Solomon has experienced, he states:

The workshop gave me more opportunities personally but mainly as a metallurgical engineer in my profession to be able to focus on what mercury related problems we face in society and see how I am contributing to the phase-out of mercury. It brought me a lot of great opportunities to link up with a lot of stakeholders both locally and internationally.

Solomon felt the most significant change for his NGO’s involvement in the ratification of the Minamata Convention after the MIA workshop “was to be a part of the steering committee and organizing individuals from national and international organizations as a group, as well as the interest of managing mercury and how we can address this problem in society”. The steering committee has met regularly throughout 2017 and 2018. One direct outcome that taken place as a result of the Steering Committee meetings was Ghana’s exemption from phase-out dates in the Minamata Convention such as Annex A (mercury-added products) and Annex B (manufacturing processes where mercury is used) of the Minamata Convention on Mercury for the next 5 years (2). The application for exemption was made to provide Ghana the necessary time to conduct a comprehensive assessment of the mercury and mercury-added products and build the necessary capacity for phase-out before the Convention enters into force August 2018.

Another intended outcome from the project was to build the capacity of a national taskforce to take mercury inventory through the UNEP toolkit. “The workshop contributed to [building] the national capacity for mercury inventory, because it was after the workshops when [they] came together and the inventory team was selected. [They] went through online and face-to-face training to understand and build the capacity to conduct the inventory. The workshop contributed as one of the outcomes in terms of building the national capacity to undertake Mercury Inventory.”

I think that Ghana is an example of success due to the people’s participation in this workshop. 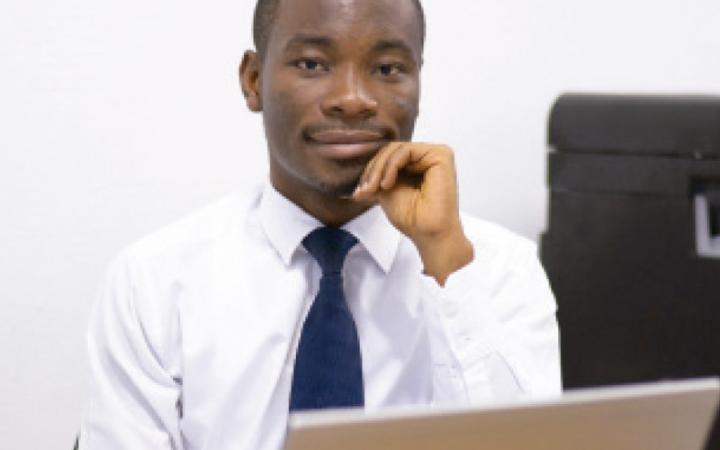 Joel works at UNDP, coordinating activities in Ghana between his organization, the EPA, and UNITAR. He also supports other projects related to the Minamata Convention from the point of view of UNDP with other ministries. He participated in the joint inception workshop on the MIA and NAP for the artisanal small-scale gold miners in January 2017 and has been a part of the project management team.

From a systems point of view, Joel identified five key points as being the impact of the MIA Project, which UNITAR and UNDP support its execution.

When asked where Ghana would be without the intervention from UNITAR, EPA and UNDP, Joel believes that Ghana may not have been in the same position it is today in regard to the implementation of the Minamata Convention.

“I think it would be best to look at it from the perspective of the whole project and not only specifically at the inception workshop. Because the workshop was just one key aspect of the project. I would say that the activities of the project that EPA, UNDP and UNITAR have supported has significantly increased the priority given to mercury management in Ghana. It is important to note also that this project was timely and came at a point when the Government through EPA had already started leading national efforts to effectively implement the Minamata Convention. The activities of this project therefore enhanced the already existing initiatives and has increased national discourse around the safe management of mercury.

Secondly, things would have been done in silos, where different organizations implement different initiatives at the same or different times with little or no coordination which makes it difficult to measure their total impact at the end of the day, and this has been the case for a long period now. But because of this project and under the leadership of EPA, things are being put together. Projects, or initiatives, or ideas that are related to mercury management have been brought together to make sure that it is done in a much more coordinated manner. So that the impacts or the outcome will be very significant and tangible in the country. For instance, a Minamata Convention Implementation Committee has been setup through this project to oversee all mercury-management related initiatives in the country in all sectors.

Joel also identified areas of indirect impact that have come about as a result of this project. “From the systemic point of view, maybe one outcome that I can say [is linked to] the policy level and the coordination part. UNDP has been leading the implementation of a project on mercury reduction in the health sector. Because of this MIA project and its key output which is the MIA Report, plans are been made for the organization of a policy dialogue on mercury phase out in the health sector in line with Article 4 of the Minamata
Convention. The policy dialogue is triggered by a myriad of factors including the mercury inventory results in the MIA report and we expect that the this will really set the tone for further policy reviews for mercury reduction and the effective implementation of the Minamata Convention in Ghana.”

From a personal point of view, I would credit my increased knowledge on mercury and the Minamata Convention to this project. I have had opportunities to read a wide variety of materials, to be involved in a variety of discussions on this subject. And I think that in the past year my knowledge on mercury and the Minamata convention has increased significantly because of this project and its activities.

Thanks to the combined efforts from EPA Ghana, UNIDO, UNDP, Swiss Confederation, GEF and UNITAR, this project has changed how Ghana is combating mercury management. Direct outcomes from UNITAR’s involvement have created the Steering Committee, policy dialogues, and awareness campaigns to create long-lasting impact on how to phase-out mercury and the use of mercury components. While this is still an ongoing process, there are already traceable links to intended and unintended impact in Ghana. UNITAR will continue to support Ghana in the implementation of the Minamata Initial Assessment activities.