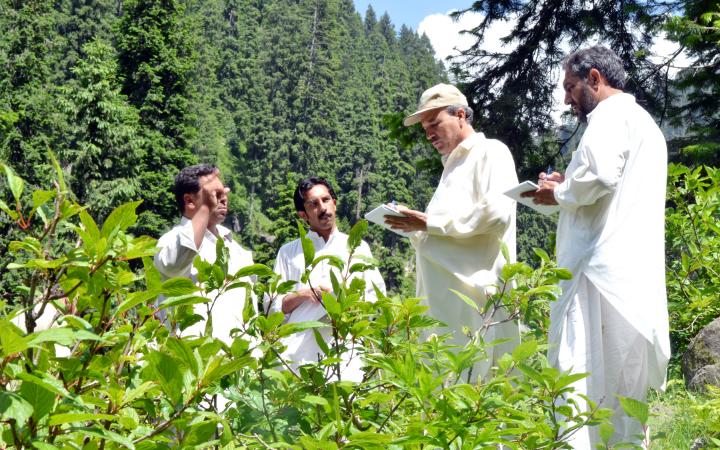 Dr. Ikram Ur Rahman has 27 years of work experience in the field of nature conservation. In 2017, he was serving as a Regional Project Coordinator in the Mountains and Markets Project in the Northern Province of Pakistan, funded by the United Nations Development Programme (UNDP) and the Global Environmental Facility (GEF). The goal of this project is to use the voluntary certification of non-timber forest products (NTFP) to promote conservation and help create a market, which benefits existing conservation efforts.

In 2015, Dr. Rahman attended COP21 in Paris and learned about the Reducing Emissions from Deforestation and Forest Degradation programme (REDD+), which aims at reducing greenhouse gas (GHG) emissions by introducing sustainable forest management in developing countries. Soon after, he observed many REDD+ related approaches dealing with the mitigation of climate change, such as the conservation of existing resources and the enhancement of carbon stock through forestation and afforestation.

He integrated these new concepts into his technical training in rural Pakistani communities. As he began to gain new knowledge on these topics, he started taking courses offered by UN CC:Learn. UN CC:Learn is a global One UN initiative hosted by the United Nations Institute for Training and Research (UNITAR) and involving more than 30 UN agencies.

He enrolled in the Introductory e-Course on Climate Change and REDD+ Academy e-Course, which enhanced his knowledge on setting reference levels, monitoring and stakeholder engagement in forest preservation.

According to Dr. Rahman, these e-courses helped him tremendously in training the rural communities.

“I was able to raise awareness in the approach of nature conservation,” he said. He integrated information related to sustainable forest management and conservation issues into the presentation materials, which provided practical information for people living in the rural Northern Pakistani areas.

“By taking courses, I was able to grant communities, that committed to NTFP harvests, the access to national and international markets with their products".

Furthermore, Dr. Rahman was rewarded for taking part in this course. After presenting his UNITAR/UN CC:Learn certificate to his supervisor, he was granted a raise, based on the fact that his newly acquired know-how can be used to boost economic benefits for his community.

Although, Dr. Rahman has come a long way, he aims to do more. He plans to take a more inclusive approach in his udertakings, such as involving women in sustainable resource projects and educating students about the importance of nature conservation and the responsible conduct with environment.

These two tasks can be supported by taking other courses such as Children and Climate Change and an upcoming course on Gender Equality, Women’s Empowerment and the Environment, which are available on the UN CC:e-Learn platform.

The UN CC:e-Learn courses helped Dr. Rahman to advance his career, but he was also able to pass on knowledge he acquired to his community. In turn, people can sell their products on the international market now. These products provide a steady income to the poor rural communities of Northern Pakistan, and the change in resource use within the community is helping to decrease deforestation and upholding the rich biodiversity in the region.