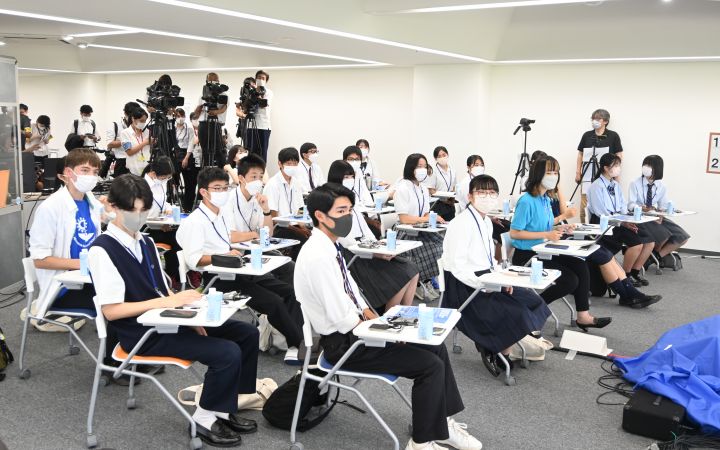 Audience from the Power of Youth from Hiroshima

September 2022, Hiroshima, Japan – On 6 August 2022, the 77th anniversary of the Hiroshima atomic bombing, Secretary-General António Guterres met with young activists from across Japan for a frank dialogue on nuclear disarmament and non-proliferation. The discussion made an indelible impression on other Japanese youth who were there.

“The panellists were discussing worldly topics in English confidently and passionately,” said Shizuku Yamashima, a 17-year-old observer at the venue. Shizuku is one of the UNITAR Hiroshima Youth Ambassadors who go to junior or senior high schools in Hiroshima – schools that offer rich peace-related education – and are keen to make a difference in the world.

It was a striking scene for the young observers: the youth activists – from the same area and generation as them – were voicing in their own words the world they envisioned to the Secretary-General.

In today’s world, not having English as a mother tongue can be a barrier. Some of the best learning content globally is in English, and being able to speak English opens doors. 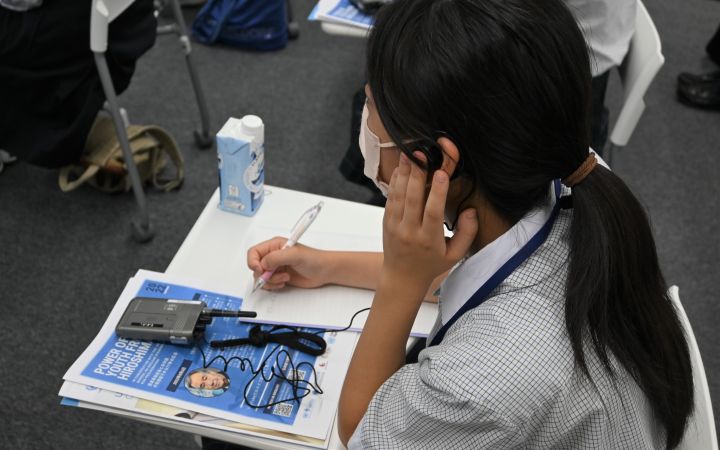 In Japan, the Japanese language is overwhelmingly common in day-to-day life. Not surprisingly, many Japanese lack confidence in communicating in English. According to the EF English Proficiency Index, a world ranking of countries by English ability, Japan ranked 78th out of 112, firmly in the “low proficiency” category.

For better or for worse, the ability to speak an internationally used language like English gives a person the ability to take a lead in this world. Thus, it is vital to create chances for students to not only study those languages, but see the languages in action.

After the Power of Youth from Hiroshima session ended, the young local students who attended continued to passionately discuss their takeaways and visions for their future. They undoubtedly showed hope and confidence – confidence boosted by understanding and thinking in an internationally used language.

Very excited to hear the views that I did not think of. - Shiori Harada

I want to be able to get many people involved and send my messages. - Mikie Nakamura

Power of Youth from Hiroshima was held on 6 August 2022 with simultaneous interpretation and broadcast live. You can watch the recording from:

In Japanese: UNITAR Hiroshima Youtube - Power of Youth from Hiroshima

The United Nations Institute for Training and Research (UNITAR) is a dedicated training arm of the United Nations. In 2021, UNITAR trained 370,139 learners around the world to support their actions for a better future.

One of the eight divisions of UNITAR, the Division for Prosperity seeks to shape an inclusive, sustainable and prosperous world. We empower individuals from developing countries – especially women and young people – to address inequalities.

Our alumni are making a difference in least-developed countries, countries emerging from conflict, and small island developing states.