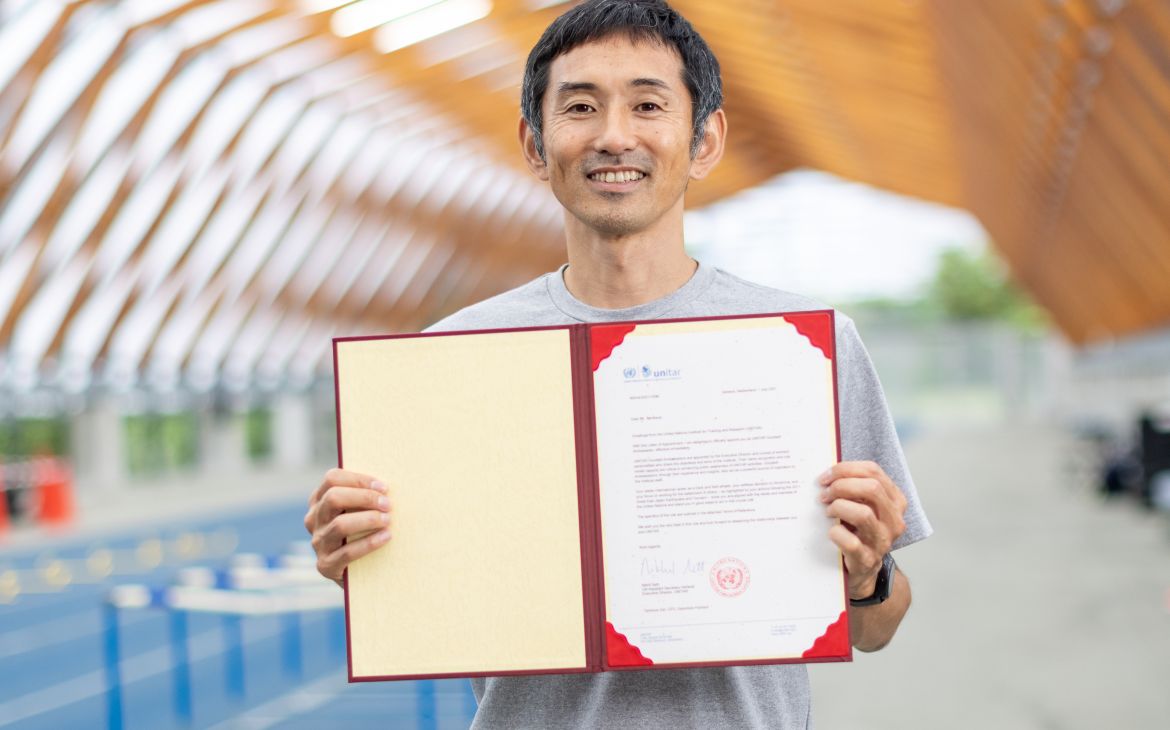 16 July 2021, Hiroshima, Japan – Dai Tamesue, two-time World Championships bronze medallist in the 400m hurdles, was appointed UNITAR Goodwill Ambassador in July 2021. “I am committed to training Asian athletes and fostering friendship among them, so I resonate with UNITAR’s activities. I look forward to promoting its missions,” said Mr. Tamesue at the online press conference held on 14 July 2021.

Mr. Tamesue is the first Japanese athlete to win a medal at the World Athletics Championship. He represented Japan at the Sydney (2000), Athens (2004), and Beijing (2008) Olympic games. Having retired from competitive athletics in 2012, he still holds the Japanese record for the men’s 400m hurdles, as of July 2021.

Mr. Tamesue is originally from Hiroshima City, Japan, and is a third-generation hibakusha (atomic-bomb survivor). Since retiring, he has dedicated himself to assisting athletes including those in countries with limited access to international-level coaches, supporting para-sports, and sharing his messages for international peace to the public.

At the online press conference, Mr. Tamesue was joined by Ms. Mihoko Kumamoto, Director of UNITAR Division for Prosperity, and spoke of his experience and goals as the Goodwill Ambassador.

“As humans, we have differences among us, but we are all on the same boat. I have many experiences where we overcame differences through sports. I would like to share with many of you this sense of being together,” said Mr. Tamesue.

On the same day, Mr. Tamesue and Ms. Kumamoto paid a virtual courtesy call to Hiroshima Prefecture Governor Hidehiko Yuzaki. “Mr. Tamesue is an athlete as well as a visionary thinker. UNITAR has selected a great person to represent your office. We wish you nothing but success,” said Mr. Yuzaki.

As Goodwill Ambassador, Mr. Tamesue will be participating in a video series on the SDG pillars and an online dialogue with Hiroshima youth on 6 August 2021. https://www.unitar.org/about/unitar/unitar-goodwill-ambassador

Located in Hiroshima, UNITAR's Division for Prosperity offers world-class learning and knowledge-sharing services to present and future change makers from developing countries, particularly youth and women, that are designed to shape an inclusive, sustainable and prosperous world.

Our programmes are dedicated to addressing growing inequalities, working in solidarity with diverse partners at the local, regional and global levels.