14 June 2018, New York City, USA – The United Nations Office of Information and Communication Technology (OICT) and United Nations Institute for Training and Research (UNITAR) hosted a morning seminar that welcomed attendees to the subject of virtual and augmented reality and its applications to sustainable development goals. After opening remarks from Pelayo Alvarez from UNITAR and Jorge Martinez

Navarrete from OICT, the speakers each introduced the audience to their areas of expertise.

The first speaker was Ms. Anna Therese Day, co-founder of Forth Studio, who introduced 360 degree video as a developing medium with a new method of storytelling. People can see entire spaces across the globe, an opportunity that allows for better reporting, mostly with respect to war, as viewers can experience conflict zones firsthand without even leaving their homes. Ms. Day explained that virtual reality (VR) video has brought about a nexus between journalism, NGOs, and documentary filmmaking, remedying reporters’ struggles to remove bias in order to deliver firsthand experience. Many world leaders have not been present in war zones and witnessed the impact of the policies they enact, and this poses a new and exciting opportunity.

The next speaker, Ms. Vassiliki Khonsari, co-founder of INKStory, defined the differences between immersive virtual reality and interactive virtual reality, saying the first allows a viewer to perceive they are within a created space while the latter gives participants agency within the immersive world so they can make their own ethical and moral choices that carry potential implications. She went on to discuss interactive virtual reality with respect to the use of video gaming as an interactive mode of storytelling. Ms. Khonsari sought to use the profound cultural impact of the video game to democratize the communication of experience, so she created multiple entertainment experiences that convey an authentic perspective. For example, Hero is a multisensory interactive experience in which the viewer is dropped in Syria and can walk freely through the streets and interact with characters, allowing him or her to choose their own actions and experience the results.

The final speaker was Ms. Debra Anderson, co-founder of Datavized Technologies, introduced web-based VR as access to the three-dimensional world without needing to buy all the associated gadgets. Ms. Anderson said that the problem is the real world is in three dimensions, but for decades the world has been locked behind two-dimensional screens. Now, WebVR gives access to VR devices in a 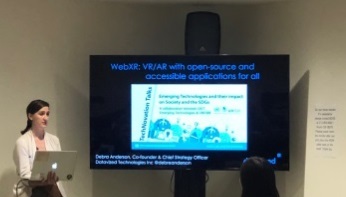 web browser, gaining everyone entry into the world of VR. Ms. Anderson’s perspective strongly emphasized the importance of data. In her opinion, VR has the opportunity to illustrate important relevant data in comprehensible ways. For example, a three-dimensional image of haze enveloping the Earth conveying the growing issue of pollution, and VR provides an emotional experience in witnessing this data in a way that numbers cannot.