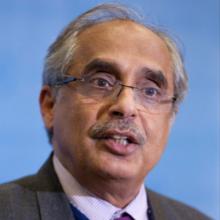 Mr. Nambiar joined the Indian Foreign Service in 1967 and spent his early years specializing in the Chinese language. During his professional career in the Indian Foreign Service, he served in numerous bilateral and multilateral appointments during the 1970s and 1980s in Hong Kong, Beijing, Belgrade and New York. Mr. Nambiar has a post graduate degree from Bombay University where he was awarded the Chancellor’s Gold Medal in 1965. He is married and has two daughters and a grandson.