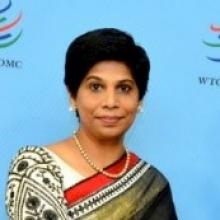 Ambassador Nazhat Shameem Khan is Permanent Representative of the Republic of Fiji to the United Nations in Geneva. Ambassador Khan was born in Fiji in 1960 and attended school there. She went to university in the United Kingdom, at Sussex University and Cambridge University, where she studied law. She was admitted to the Bar of England and Wales at the Inner Temple in London in 1983, and to the High Court in Fiji as a barrister and solicitor in 1984. She holds a Master of Philosophy degree in Criminology from the University of Cambridge in the United Kingdom.

Ms. Khan worked for 16 years as a prosecutor in Fiji, and during that time was appointed Director of Public Prosecutions of Fiji in 1994. In 1999, she was appointed Fiji’s first woman High Court judge. She was a judge mainly in the criminal division of the High Court, where she with the three other criminal High Court judges developed Fiji’s sentencing guidelines principles, based on the English Court of Appeal developed sentencing principles. This approach was later passed as legislation in Fiji in 2009.

In 2009, Ms. Khan became a private practitioner, engaged principally in training lawyers and judges on human rights law, sentencing law, governance and litigation skills. She was appointed Permanent Representative to Geneva in 2014 when Fiji opened a Mission in Geneva for the first time, and only 5 months before Fiji’s second cycle Universal Periodic Review was due at the Human Rights Council. She continues to conduct training for judges in Fiji on human rights, sentencing, and criminal justice.