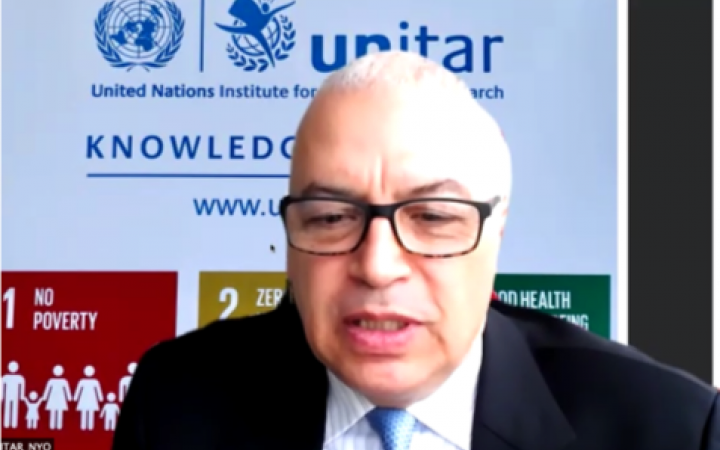 24 April 2020, New York, the United States – UNITAR New York office has successfully launched the first module of the “Realizing the Future We Want – Training series in preparation for the General Assembly’s 2020 quadrennial comprehensive policy review (QCPR) of operational activities for development of the United Nations system” virtually in partnership with the United Nations Department of Economic and Social Affairs (UN DESA) and the Permanent Mission of Switzerland to the United Nations.  The first module counted with more than 225 participants who connected online through video conference. 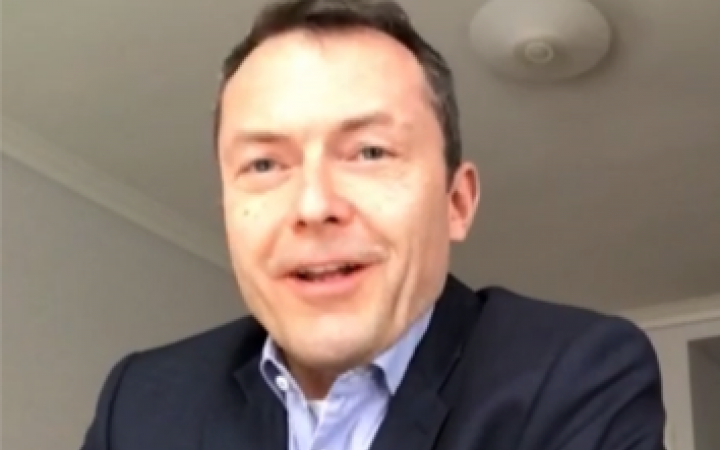 The title of the first module is the “QCPR and the UN development system”. Mr. Marco Suazo, the head of office of the UNITAR New York office opened the session with warm greetings to the participants. He then introduced H.E. Mr. Jürg Lauber, the Permanent Representative of Switzerland to the United Nations, for his welcome remarks. Mr. Lauber used the metaphor of a balloon to explain that the QCPR procedure and its training will provide delegates and UN staffs an overview of the UN development and its operation activities. It will facilitate the QCPR procedure and increase its effectiveness to the UN system.

H.E. Mr. Lauber welcomed and presented the Keynote speaker, Deputy Secretary-General, Ms. Amina J. Mohammed. Ms. Mohammed  who remarked the following points “Its going to require quite a lot of courage and imagination and co-creation, and diplomacy like you have never known it, to really make sure it is not just the U.N development system that’s fit for purpose,   but that we are going to see a UN that needs to be more responsive, and a world out there that will have very high expectations of a space where everyone voice can be heard, and solutions to the  very many challenges to be done in a better way together” 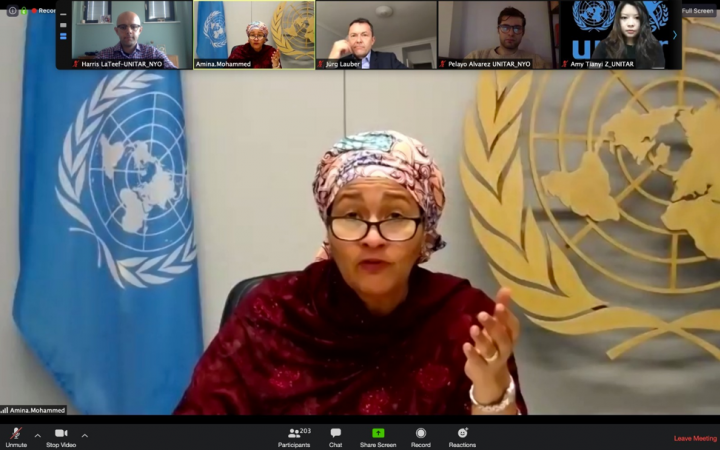 “The next QCPR will not only talk about just implementation, but implementation in a new norm of how we are going to be responding globally, from the country level to the regional level, to the global setting in our development issues”

“While COVID may have sort of pressed a pause button on the world, it has not really done so  on  issues like climate change, on inequalities, on the very issues we are trying to accelerate as we were starting this year with the decade of action on the 2030 Agenda”

DSG, Ms Mohammed emphasized the importance of the QCPR as it enables Member States to strategically guide the UN development system to be effective, efficient and coherent. As the entire world has entered an unprecedented time, it increases the urgency for the UN development system to deliver integrated support to the Member States. She mentioned the 2016 QCPR and the repositioning reforms, and she confirmed that the 2020 QCPR will be ambitious and innovative, especially considering the current time. She believes that the 2020 QCPR will look beyond how the UN development system works, and explore hard questions such as how could the system support the Member States in a long-term. At the end of her keynote speech, she encouraged the Member States to review the Secretary-General’s report and to make the best use of the wealth of support from the Secretariat and the system as they carry the torch forward.

After the keynote speech, Mr. Suazo introduced the moderator Mr. Neil Pierre, the G77 Coordinator from the Permanent Mission of Guyana to the UN. Mr. Pierre introduced the first panelist, Mr. Peter Messerli, Co-chair of the Independent Group of Scientists 2019 and Co-author of the Global Sustainable Development Report. Mr. Messerli’s session “The Future is Now – Global Sustainable Development report 2019”: Implications for the UN development system gave a clear review of the progress of 2030 Agenda. He covered some of the remarkable progress of SDGs throughout the year, but he also mentioned some challenges, such as raising inequalities and climate change. He encouraged Member States to collaborate and work together to tackle the challenges that are faced during the SDG implementation process.

The second session was delivered by H.E. Ms. Lois Michele Young, the Permanent Representative of Belize to the United Nations on The Decade of Action: How can the UN development system best support the acceleration required to achieve the 2030 Agenda. Ms. Young mentioned some pressing issues faced by Small Island Developing States (SIDS) resulted by the climate change, and the dare situations caused by the current pandemic. She emphasized the importance of biodiversity and sustainable resources to the SIDS, and she urged the Member States to take actions and stimulate systematical change in order fight against the climate change collaboratively.

After a brief Q&A session moderated by Mr. Neil Pierre, the third session Introduction to the QCPR – Evolution of Member States’ guidance to the UN development system was delivered by Mr. Markus Reisle, the counsellor of the Permanent Mission of Switzerland to the UN and Ms. Marion Barthelemy, Director for the Office for Intergovernmental Support and coordination for Sustainable Development, UN DESA. The two spakers have provided an overview of the QCPR procedure, and its meaning and responsibilities to the UN system. They broke down the key elements of the QCPR, and provided some challenges that are facing by the UN development system. The session has increased the delegates’ understanding of this procedure, and laid a sound foundation for the later modules. 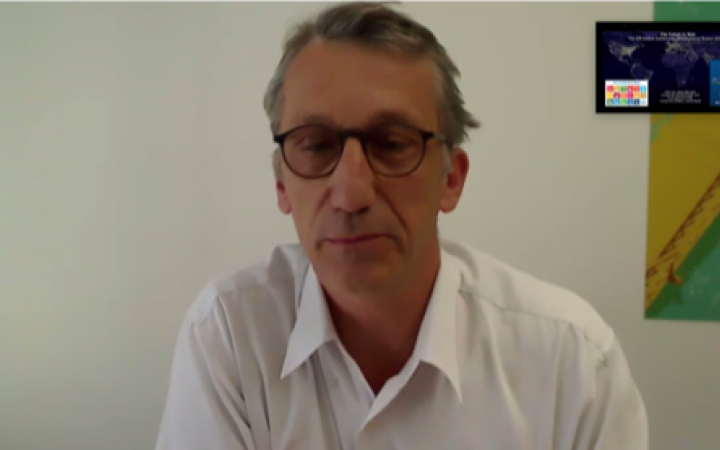 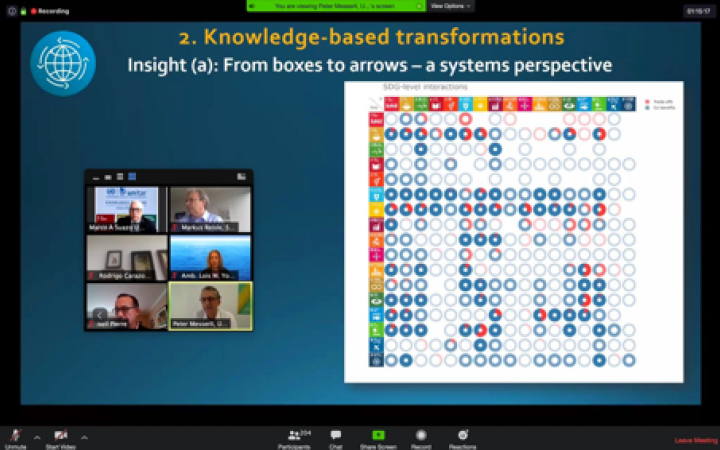 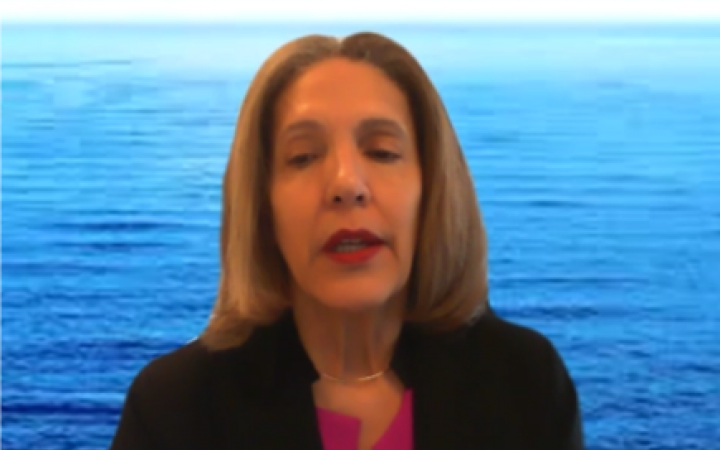 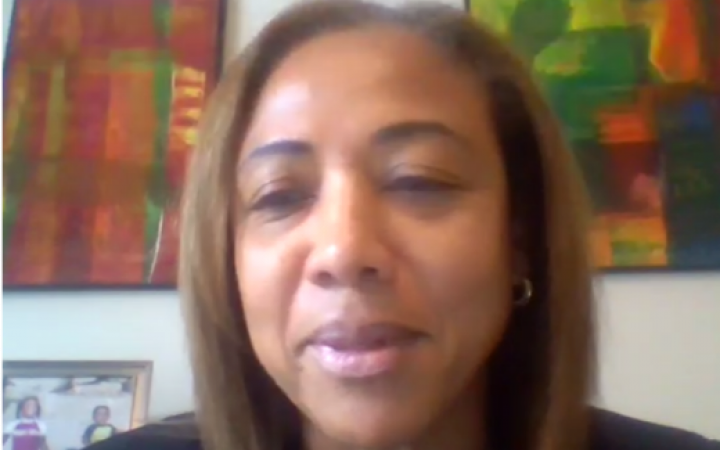 The last session was an overview of reform efforts to reposition the UN development system delivered by Ms. Michelle Gyles McDonnough, the Director from the Sustainable Development Unit of the Executive Office of the Secretary-General. She asked the questions as how we could leverage the reform process to maximize its efforts. She mentioned that one of the ways that we can achieve the reform process was to emphasize the countries’ priorities and provide knowledge-based exchange. She believed the best way to help the Member States would be resources-sharing – as the Secretariat housed numerous valuable knowledge and resources. She concluded the session with the mission of leaving no one behind, and she encouraged all the Member States to adopt multilateral approaches to bring the right resources to the people who are truly in need.

After a brief interchange of opinions between the panelists, Mr. Marco Suazo concluded the first module of the QCPR training. It was a successful collaboration between UNITAR, UN DESA and the Permanent Mission of Switzerland. Module 1 has benefitted more than 200 participants from the Member States and UN entities, and it has significantly increased the delegates’ understanding of the 2020 QCPR procedure.  The dates of the next module will be announced very soon on the journal and all participants will be duly informed.