A new think tank is already helping the country build its capacity in important areas.

Under the agreement, UNITAR and C4A will jointly raise funds and deliver training, which will focus on marginalized people. Key lessons learned from the trainings will be widely shared among practitioners across the country. In addition to addressing peacebuilding topics, the programmes will leverage UNITAR Prosperity’s strengths in the areas of human resources and institutional capacity development; entrepreneurship and the private sector; innovative leadership; gender equality and women’s empowerment; trade and finance; and anti-corruption and financial crimes. 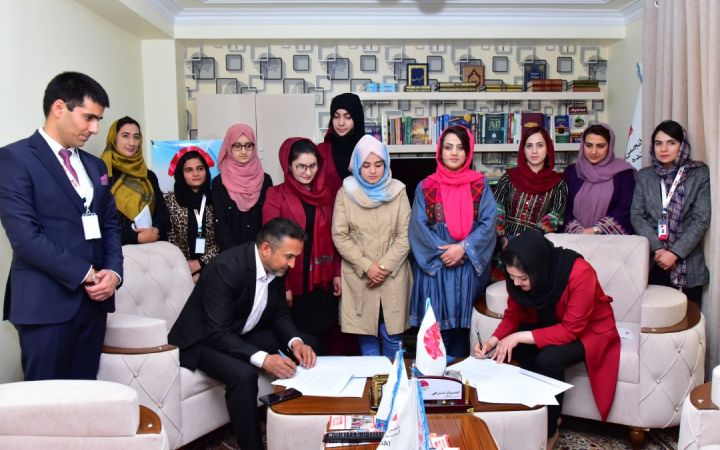 The Capacity for Afghanistan Think Tank (C4A) is a new concept in the fragile state; it is changing mindsets, growing an enthusiastic cohort of dedicated professionals and helping to improve governance and equality. The United Nations Institute for Training and Research (UNITAR) is working with C4A to provide highly educated and skilled resource people for training and collaboration in building capacity.

Formed during 2017 and legally constituted in January 2020, C4A is rapidly becoming a platform for Afghans with higher education to interact on topics crucial to sustainable, peaceful development. Already, C4A boasts over 1,500 members, 240 of whom are women; this latter number is growing daily, thanks to an active recruitment campaign.

C4A’s ambition is to provide evidence-based recommendations to the government to address the many challenges facing Afghan society. C4A is independent of any political party.

“This group of talented people has been organizing events to discuss current circumstances in Afghanistan and come out with positive solutions in the shape of journals, articles, publications, and a platform of ideas to be delivered to government and the international community, especially to other think tanks around the world,” says Imtiaz Sharifi, founder of C4A.

Sharifi, whose daily work is as a sub-director with the Afghanistan Revenue Department, is an alumnus of the UNITAR Executive Master’s degree programme. He often acts as a resource person and coach for UNITAR Division of Prosperity and has given many lectures for the Afghanistan Fellowship Programme. The Fellowship Programme aims to build long-term leadership among citizens, improve organizational management, and empower people to became better professionals and agents of change in Afghanistan.

“There are nearly 4,800 associations registered in Afghanistan but we did not have any official think tank,” he explained. “The word ‘think tank’ is not even in the Ministry of Justice laws. I discussed the idea with people who became the co-founders. It gave me the idea of enhancing other educated people in Afghanistan. The idea was fresh, and slowly the group grew from a few to the large number at present.”

The members work on a voluntary basis, providing technical advice, preparing policy briefs, and engaging in other activities, all of which not only benefits the wider Afghan society but also enhances the individual members’ professional profiles, experience, and networks. Members hail from all parts of the country, with special strongholds in Baghlan, Bamiyan, Farah, Herat, Jalalabad, Kandahar, Khost, Mazar, and Parwan.

“As the head of C4A’s research and development committee,” says Sooriya Arya, who works as a good governance and security specialist with the Independent Directorate of Local Governance in Kabul, “C4A for me is a platform where I see coordination, acceptance, aspiration and enthusiasm. The greatest contribution of C4A in my personal life is introducing me to a huge network of talented, passionate and smart individuals with a vision to bring change in their community by utilizing their personal skills to contribute to the national interest.

“At a professional level, my aspirations for implementing various concepts in the fields of good governance, women’s empowerment, peace and conflict resolution, education, politics and cultural affairs are impactful and with outcomes and results. I observe the changes in the life of my Afghan citizens as well in their attitudes and perspectives. Therefore, as a founding member, the vision I was expecting through C4A has been taking place.” 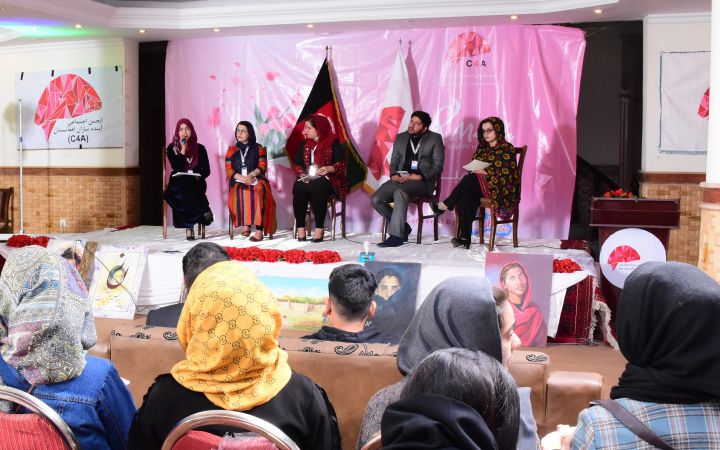 C4A has a “females first” policy, where all committee heads of finance, media, and event management must be women and any opportunities that arise must first be offered to female members. And women are literally offered front seats at all events. On 5 March 2021, C4A held a special peace event in commemoration of International Women’s Day with over 200 women in attendance. The event provided more opportunities for networking and discussion.

Despite being a young organization, C4A has been achieving its goals rapidly. There have been several direct policy dialogues in the provinces and the capital and webinars with representatives of other countries – for example, China, India, Pakistan and the United States – featuring debates on gender, peace, education, and the Sustainable Development Goals. C4A members have been networking with top government officials, exchanging research data and analyses on a variety of issues. The C4A team also takes part in the National Peace Council, providing evidence-based solutions.

The C4A members’ database is shared with all donors, including the World Bank, and embassies, NGOs, and private companies, acting as an employment resource; more than 40 members have found jobs in the public and private sectors through C4A’s profile-enhancement and networking channels.

C4A also has a COVID-19 awareness programme in the provinces and holds webinars to explain safety and precautions, along with general health-awareness seminars for villagers in rural areas.

“I can say that C4A has advanced my moral and personal values,” says Mohammad Rasool Niazi, a monitoring and evaluation manager with the Ministry of Urban Development. “It has given me a strong feeling to build my knowledge about the issues that exist in society through events and seminars held by C4A, for instance, celebration of Women’s Day and the youth education challenges seminars after the Kabul University attack. It is a bridge for me to meet with Government. For example, we will be meeting with the Kabul municipality management to share youth plans and challenges with them.”

However, establishing C4A and managing its rapid growth has not been easy. Sharifi spent three years talking with more than 10,000 professionals in Afghanistan to establish C4A, along with Noorzai, Anwari and several others.

“I had to sell the idea of a think tank to new members as they needed tangible convincing to join,” he says.

Then, they had to set up an office and find a budget, including catering for events to recruit new members, especially women.

“There were [fewer] females to begin with because women said they wanted to join an association where the female member numbers were already high,” he says. “Initially, C4A had only two female members but those two, and the men, were very committed to attracting more female members.”

As well as organizing events and researching and writing, C4A also manages seven online chat groups with more than 250 members each. These groups need staffing and other resources so that the goal, mission and objectives remain constant in all groups.

In the future, C4A will build on their successful International Women’s Day peace conference, which saw more than 300 people from all over Afghanistan attend, and launch a series of seminars on agriculture, gender, health and more. C4A also plans to launch data literacy training and C4A Times, a serial publication featuring news, research and other articles.